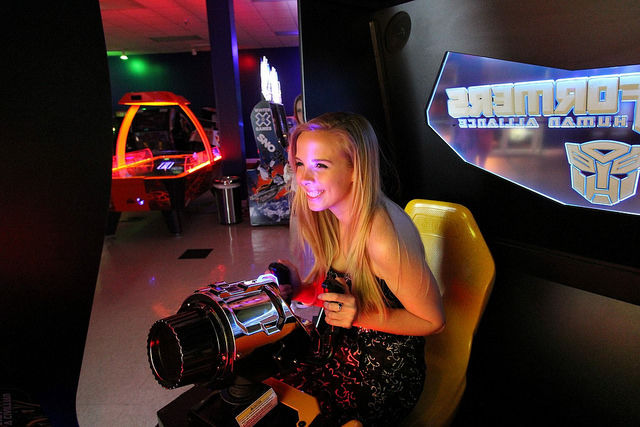 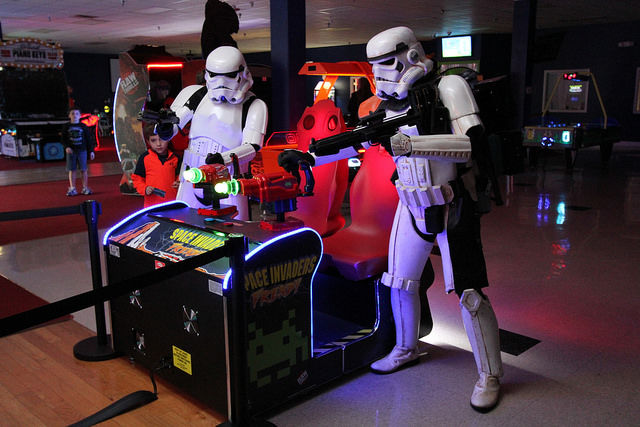 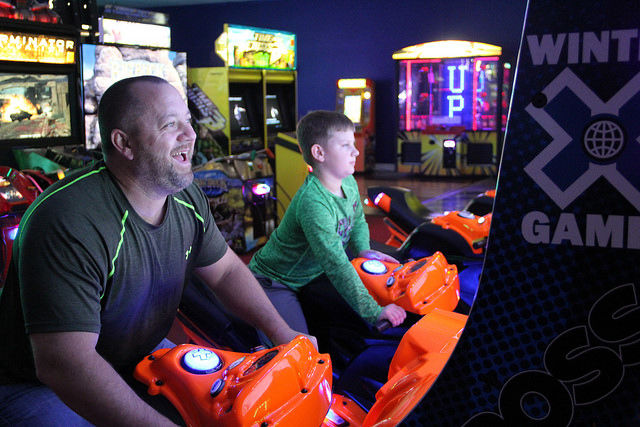 With a full-dining menu, a laser tag arena, and an extensive selection of arcade games to satisfy young and old alike, CyberZone is a one-stop entertainment site for the whole family. Locally owned and operated by Simon and Elaine Bak, CyberZone has been providing the Opelika/Auburn area with family-friendly entertainment for the past 5 years. In fact, June15 is CyberZone’s 5th Anniversary.

CyberZone offers guests a variety of immersive experiences—including high energy laser tag. CyberZone’s laser tag arena, which is 3 times the size of others in surrounding cities, allows for many different game formats and uses new, state-of-the-art equipment. They’ve recently increased the number of laser tag vests to 36, making possible for even more guests to join in the fun.

Laser tag isn’t all CyberZone has to offer. They also have one of the largest arcades in Alabama. This arcade holds some of the latest and greatest titles in arcade video games. It has a wide assortment of arcade games, ranging from carnival games to full theatre video games. Not only does the arcade have the newest games available, but CyberZone is the only center that incorporates a full “Retrocade” known as the Replay Zone with 15 classic arcade games—including Pac-Man and Donkey Kong—and pinball machines. Another arcade style attraction CyberZone offers is Atomic Rush, which according to the CyberZone website is “…like a futuristic, LED version of Simon Says, but with a far more interactive game environment.”

Between the laser tag and the arcade attractions, guests are sure to work up an appetite. Luckily, the most recent addition to CyberZone is a full dining menu. For the past few years, CyberZone has offered pizza for parties or when guests requested it, but there was never a formal offering. Now, guests can not only order pizza, but also flatbreads, chicken bites, and a variety of shareables like cheesy bread and mozzarella sticks, and fountain drinks. Now, when your hunger strikes, there’s no need to cut your fun short. You can simply dine in at CyberZone and continue your entertainment experience.

CyberZone can even hold your next party or social event. They have programs in place for team building and corporate day retreats. These programs are great for companies, but they have also been successful for day camps, churches, sport teams, social organizations, family reunions, and more.

Owners Simon and Elaine Bak are no strangers to the entertainment industry. Both Simon and Elaine worked for the Walt Disney Company while attending the University of Central Florida. Combined, the Baks have over 10 years of Disney experience, which is a great foundation on which to build an entertainment brand. In 2005 they opened their first stand-alone laser tag center in Tennessee, which is still open to this day. They moved to the Opelika/Auburn area in 2009, and after three years of searching, planning, and working with the Opelika city officials, the Baks settled on the old A&P grocery store building to create a new entertainment center. In 2013, the Baks opened CyberZone and have brought the Opelika/Auburn area a much-needed service.

The Baks haven’t just built a company that values it’s guests—the Baks also value their employees. The CyberZone team consists of over 20 team members, many of whom have been with the company for quite a few years. Team members include students from all of the local high schools, Auburn University, and Southern Union, a number of whom started working for CyberZone when they were 16 and have now moved into management and supervisor roles since graduating high school. There are even team members who attend college out of town but work at CyberZone every summer when they come home. “For many, CyberZone is their first job, and it is quite amazing to see such dedicated employees who are so vested in the success of the business,” says Elaine Bak. Common themes of online reviews are the pleasantness of the team members and the cleanliness of the facility. “We owe this to the outstanding values of attentiveness, kindness, and cleanliness that our team members demonstrate,” adds Bak.

With all it has to offer, it’s no wonder CyberZone has been O-A News Readers’ Choice award winner for “Best Family Fun” for 5 years in a row. CyberZone has also been awarded the NADO innovation award for economic growth nationally. In March 2018, Play Meter, a worldwide publication that has been the forerunner in the arcade industry since the 1970s, selected CyberZone as its “Family Entertainment Center of the Month.” Even after all this praise, this award-winning company shows no signs of slowing down in the near future. Over the next year, there will be plans in place for a vast expansion. Look for CyberZone to add new attractions, solidify their food and beverage menu, and continue investing in their staff selection, training, and development.