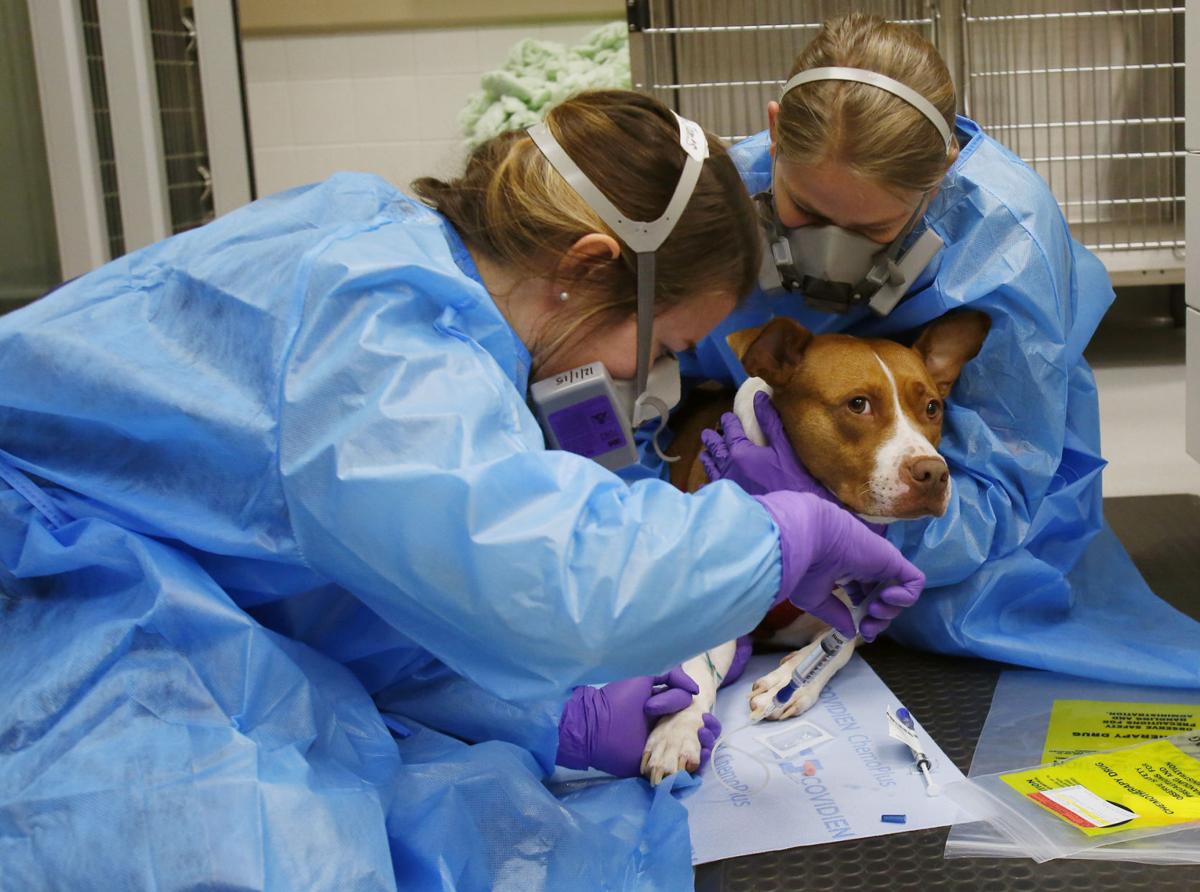 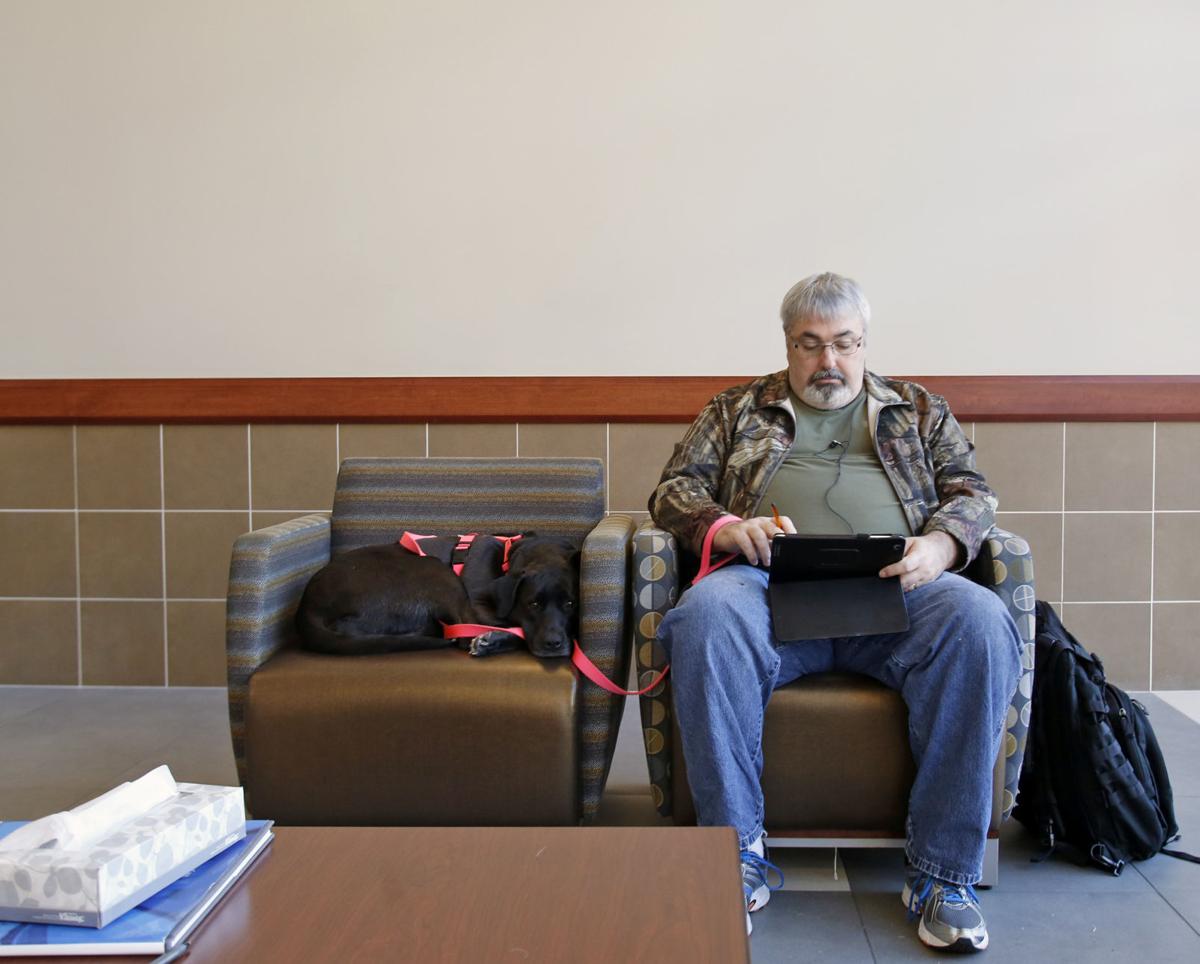 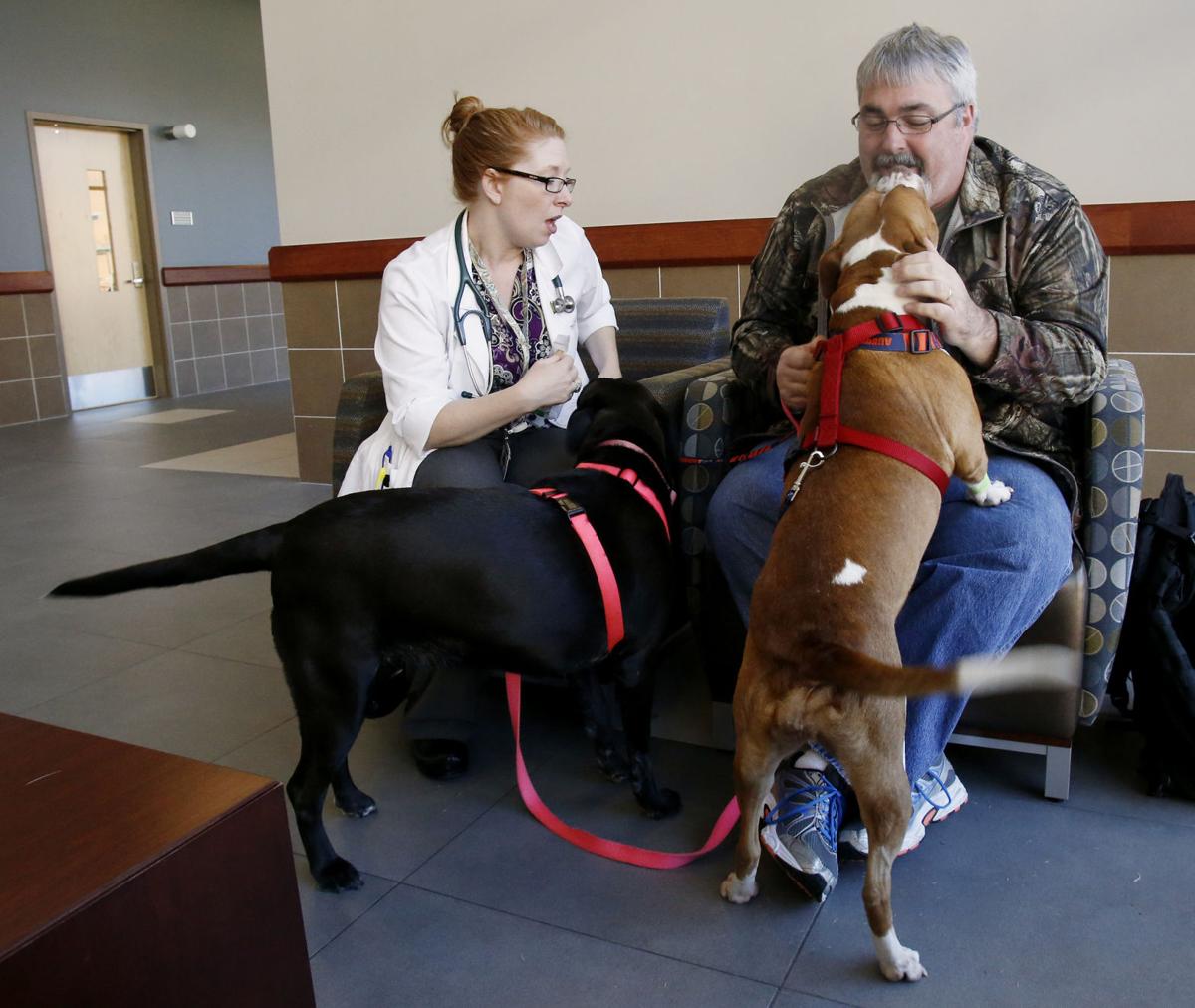 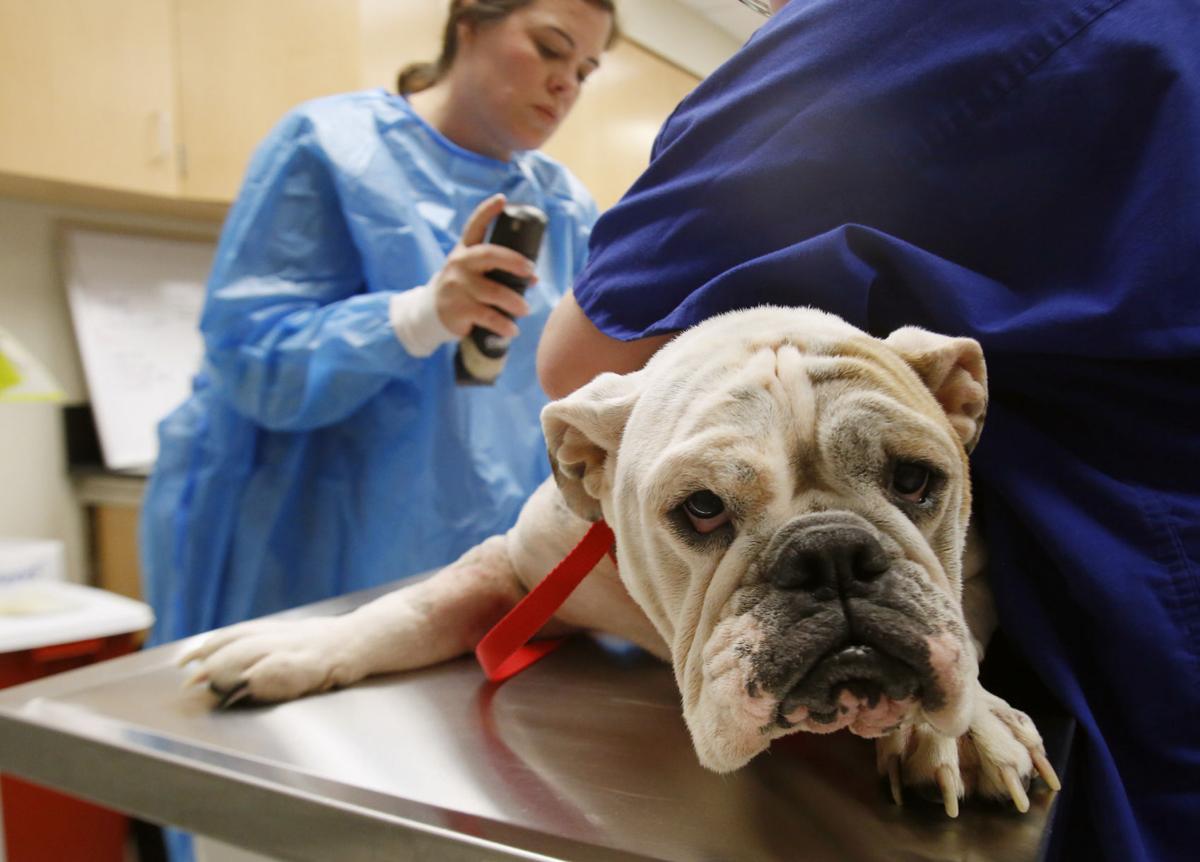 Registered veterinary technician Jenny Castelberry readies 6-year-old bulldog Amelia for her last round of chemotheraphy Tuesday, Dec. 15, 2015 in Auburn, Ala.

Registered veterinary technician Jenny Castelberry readies 6-year-old bulldog Amelia for her last round of chemotheraphy Tuesday, Dec. 15, 2015 in Auburn, Ala.

Down a long hallway punctuated by waiting areas flooded in sunlight, 5-year-old black lab Holley is curled up in a chair next to Daniel Baker. The pair has driven an hour and a half from Newnan, Ga., to Auburn University’s Wilford & Kate Bailey Small Animal Teaching Hospital once a week since mid October.

“The very first time we were here for eight hours. The rest of the time, it’s anywhere from two to four,” Baker said. “It’s whatever stage they’re doing, because some of them are faster than others. But it’s going to take at least two hours, because that’s just the blood work.”

Four-year-old American Staffordshire terrier Jayda, Baker’s grand-dog, was diagnosed with lymphoma after his son noticed swelling in her chest, neck and stomach. The family took her to their local vet, who did blood work and referred Jayda to Auburn’s veterinary teaching hospital.

“And we did, and they confirmed that she does have cancer,” Baker said, adding Jayda makes the trip for chemotherapy every Monday or Tuesday.

“They do blood work once a week. There’s one week a month that we get blood work done at home and get the results down here. They do an injection; that’s about all I can really tell you about it. They spout out names that I can’t remember, or even try to pronounce.

“But she’s looking really good; I can tell you. And acting fantastic.”

Jayda’s visits to the Oncology Suite are some of about 2,800 this year. Auburn’s integrated team of medical, radiation and surgical oncologists is one of very few in the United States that can build an integrated plan before starting treatment, and they’re the only veterinary oncologists in Alabama. Of the roughly 600 new individual patients the team sees each year, the majority are dogs and cats. But they’ve also treated large animals, like cows and horses, and exotics, like snakes and parrots, as well doing consultations for the Montgomery and Birmingham zoos.

“The joke is always that human oncologists treat their patients like dogs, and we treat our patients like people,” said Annette Smith, DVM, MS, DACVIM and the Lowder Distinguished Professor in oncology who coordinates the oncology service. “Quality of life is always the number one goal for us. We don’t want the treatment to be worse than the disease. In the human setting, we can sit down and say, ‘I’m going to make you miserable for the next six months, but we think we’ve got a 95 percent chance you’re going to see your daughter get married.’ Or there’s some goal out there that we think we can accomplish by making you sick for some time. For a dog, it’s all about ‘How do I feel today?’ So we tolerate a lot fewer side effects in our pets than we do in people.”

Auburn’s oncology team is part of the Comparative Oncology Trials Consortium of the National Cancer Institute, which looks at the translational nature of cancer and treatment in animals and humans. But lymphoma, like Jayda’s, is the most common malignant tumor Auburn’s oncology services sees in dogs and cats.

“It’s very treatable; it’s not curable. It’s one of those tumor types where we really have to sit down and talk about management of the disease, not necessarily cure,” Smith said. “We see all the other tumor types that are out there, too. Dogs and people are essentially the same in their cancer diagnoses.”

Most patients drive two hours each way for treatment, but some drive as many as four. And depending on the treatment plan, some patients come to the Plains once a week. Treatment plan also dictates cost, which can range from $3,000 to $10,000.

“There are a lot of tumor types that can be treated purely with surgery. If a surgeon can remove it and take it out and the tumor has not spread anywhere, then we’re done,” Smith said. “Radiation therapy will generally range from a couple of days out to four weeks, depending on what the owner’s goals are and what we think we’re going to be able to accomplish with radiation therapy. Chemotherapy can range from three months up to over a year, depending on the type of chemotherapy that we’re using. Pretty much it’s always balancing the owner’s goals with what we think we can accomplish with the tumor, keeping in mind the quality of life for the patient.”

On Tuesday afternoon, Krista Coggins drove back to Birmingham while bulldog Amelia snored beside her. A few hours earlier, Amelia was awarded a hand-decorated “Chemo Superstar” bandanna, covered in messages from her treatment team.

Amelia started treatment for stage 5 lymphoma on Aug. 10, her sixth birthday. Coggins said oncologists and technicians welcomed her with a meat birthday cake with cheese frosting.

“She got sick in the summer, and it took two months for our local vet to diagnose it,” Coggins said. “She just finished her 19th week today.”

Amelia had four rounds of once-weekly treatment for four weeks, with one week off, the same way non-Hodgkin’s lymphoma is treated in human patients. She was in remission after her first treatment, Coggins said, and didn’t experience many side effects of the drugs, like hair loss.

“She’s relatively young, and she’s always been healthy. So it never really crossed my mind,” Coggins said. “I knew it was expensive and time-intensive, but I didn’t know it was so similar to humans.

“We’ve been really lucky with how things turned out. She hasn’t had very many bad days, and she’s been pretty feisty,” Coggins continued. “The worst we’ve had has been a day of nausea a few days after.”

After doing her own research, Coggins has changed Amelia’s diet to help eliminate some of the environmental factors of cancer.

“We’re hopeful. We can’t cure cancer, but hopefully we won’t come back for a while,” Coggins said, adding Amelia’s arch nemesis is a backyard sapling. “As long as she’s ready to throw down Rhonda Rousey-style, she’s feeling pretty good.”

Baker and his family are hoping for the same results for Jayda.

“Every time she leaves, she acts just like a brand-new dog. She acts fine. Playful and loving and ready to eat, because she can’t eat anything after midnight. Just wide open. That’s Jayda,” Baker said, nodding to black lab Holley. “This one, lying down. That’s her goal in life. But Jayda, she’s wide open.

“They say the prognosis is actually poor. She should have a good quality of life. But she won’t live maybe a year,” he continued. “But she’s going to be a miracle. I guess anything can happen. They said the average mean is from six months to a year. But we’ve been doing research, and there are people that have said two, three, five years. We’re hoping she’ll fit in that category. She’s such a sweet, loving girl.”

Without treatment, Baker said the veterinarian estimated Jayda would only have about four weeks to live.

“They’ve all been great down here. I think if my dog lost a toenail, I’d drive all the way down here just to get her checked. They’ve been fantastic, everybody,” Baker said.

“They say once she gets through that door, she’s a brave dog.”