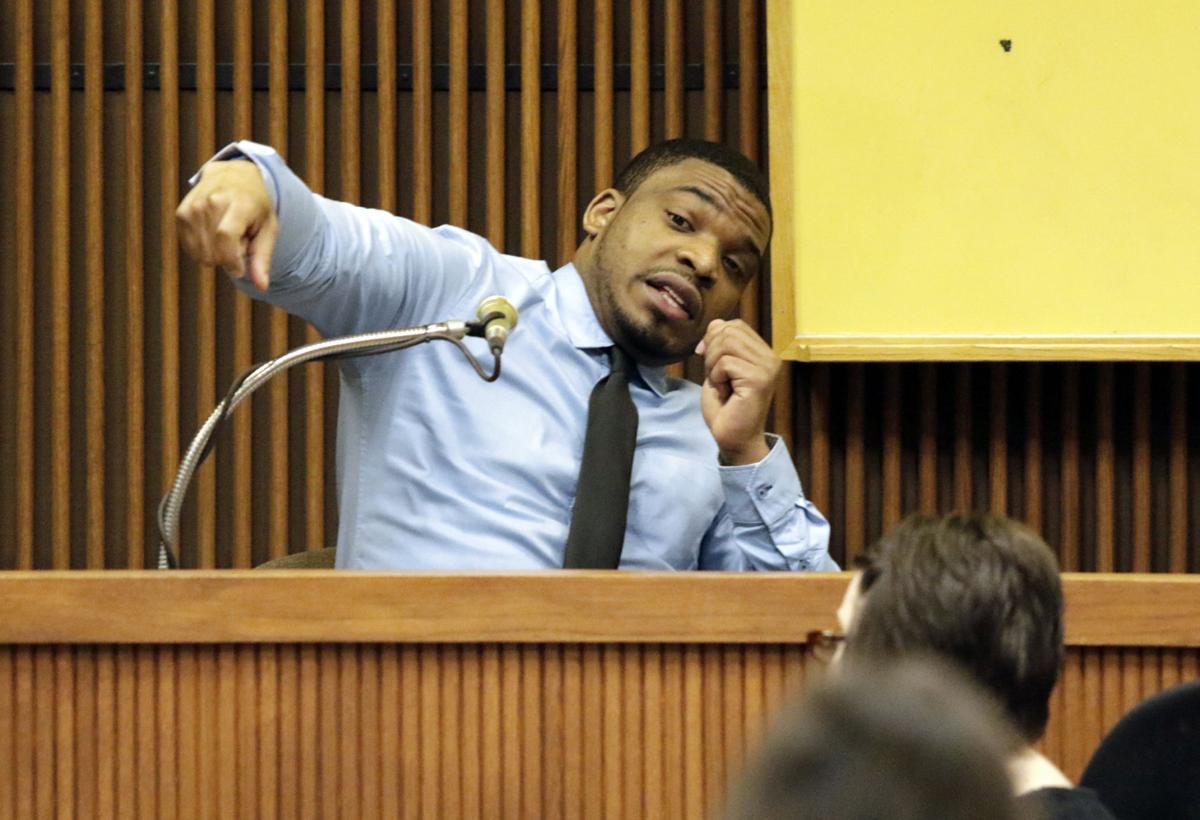 Defendant Markale Hart reenacts how he shot Jakell Mitchell during the 2014 Tiger Lodge shooting during trial at the Lee County Justice Center in Opelika, Ala., on Friday, Dec. 8, 2017.

Defendant Markale Hart sits at the stand to provide testimony during trial at the Lee County Justice Center in Opelika, Ala., on Friday, Dec. 8, 2017.

Defendant Markale Hart reenacts how he shot Jakell Mitchell during the 2014 Tiger Lodge shooting during trial at the Lee County Justice Center in Opelika, Ala., on Friday, Dec. 8, 2017.

Defendant Markale Hart sits at the stand to provide testimony during trial at the Lee County Justice Center in Opelika, Ala., on Friday, Dec. 8, 2017.

After four days of trial testimony, it’s now left to the jury to decide whether Camp Hill resident Markale Hart killed an Auburn University football freshman out of self-defense in the parking lot of Tiger Lodge in December 2014.

“I feel very bad about it,” Hart said at the stand to prosecutors about the death of Jakell Mitchell. “It hurts for me to sit here and look at his family. I feel terrible, especially looking at his mother. It has got to be devastating.”

Hart, the defendant in the case, and his cousin, Tyrone Rowe, were the last two witnesses to testify before closing statements on Friday. Rowe is the man believed to have been in conflict with Mitchell, the victim, leading up to the shooting.

Hart and Rowe both testified they never met Mitchell in person until the night of the shooting.

Rowe, however, told the court Friday that he first had digital communication with Mitchell roughly a year before the shooting occurred when he liked a photo of Mitchell’s girlfriend that Mitchell posted on his Instagram account.

On Dec. 14, 2014, Hart, Rowe and Devonte Pogue, a cousin of Rowe, were exiting the apartment where a party was held, Rowe testified, when he first encountered Mitchell. It was at that moment that Mitchell recognized Rowe and the two began exchanging words in the breezeway on the third-floor of the apartment building, Rowe claimed, before Hart and Pogue were able to urge him downstairs to leave.

Rowe testified Friday that Mitchell told him he would be "a dead man" for talking to his girlfriend. In response, Rowe used an expletive while explaining Mitchell "didn't scare him."

Hart was already walking downstairs when he realized his friends were not with him, Hart said on Friday, and returned upstairs to fetch them to leave. When he made it back upstairs, he saw Rowe and Mitchell arguing, Hart testified.

“I wasn’t trying to listen to what they were talking about,” Hart said. “I was just trying to get [Rowe] back to the car so we could go.”

Neither witness recalled seeing Mitchell with a firearm while in the breezeway.

Downstairs, Rowe was ahead of Hart and Pogue walking to his car in the parking lot when a man named "Big D" caught up with Hart near the bottom of the stairs, Hart testified. "Big D" then asked Hart if he was armed and warned Hart of a man upstairs that was claiming he was going to harm Rowe.

Before parting ways, at some point "Big D" cocked a firearm and slipped it into Hart’s jean pocket, Hart testified.

Hart knew "Big D" as a former schoolmate, Hart testified, but last saw him four years prior to the shooting and didn’t know his real name. Hart described the gun as a black Glock, but smaller than the gun Mitchell used.

Rowe was near his vehicle when he looked back and saw Mitchell walking his way, Rowe testified on Friday, and took off his hooded sweatshirt because he believed he and Mitchell were about to engage in a fist fight.

About 30 people were outside in the parking lot because they expected to see a fist fight, Rowe testified, but then Mitchell pulled a firearm from his right hip and began waving it around.

Rowe wasn’t hit by the shot, Rowe told the court, but fell to the ground “for dear life” and closed his eyes. Rowe then got up and ran away, still hearing gunfire as he retreated, Rowe testified.

Rowe testified he called a friend to pick him up and she took him back to her dorm in Tuskegee.

Rowe and his friend prayed, he said, between the time of the shooting occurred and when he went home.

Hart “instantly” noticed a gun in Mitchell’s hand when Mitchell had reached the bottom of the stairs, Hart testified, and called out to Mitchell to “don’t do it” because Rowe is Hart’s “brother.”

Mitchell “barely” looked at Hart before he fired at Rowe, Hart testified.

After the shot was fired, Hart recalled walking toward Mitchell and with his hand on the gun in his possession.

“I was concerned about the safety of my cousin,” Hart explained in court. “I was afraid [Mitchell] was going to kill him.”

Mitchell then directed his attention toward Hart and fired at Hart, Hart testified.

Hart did not stop shooting until Mitchell stopped shooting, Hart testified, but did not continue to fire when Mitchell fell to the ground. Hart told the court that he walked backward as he fired at Mitchell and demonstrated how he pointed the gun and ducked.

After the shooting, Hart ran toward Pogue's vehicle that was parked in another part of the parking lot, he testified, and threw the gun under vehicles parked at the apartment complex because he didn’t want to take the gun with him or keep it in his possession.

Hart did not call police after the shooting, he testified.

“Because it’s like… where I’m from, it’s just not normal to call police on myself,” Hart explained.

However, Hart went home, he testified on Friday, and notified his family what happened. His family called his cousin’s father, a former police officer, whom instructed Hart to turn himself in.

The cousin’s father did not appear in court to testify during the trial.

Hart told the court that he did not turn himself in to police at the police station because he was notified that investigators were already at Rowe’s house, so he turned himself in to custody there because he believed it would be easier.

With photographs of Mitchell’s autopsy and the crime scene propped in front of the jury box, Lee County Chief Assistant District Attorney Jessica Ventiere told the jury that “you can’t fight forensics.”

Ventiere recapped some of the evidence that was presented earlier this week during trial, but focused on Mitchell’s gunshot wounds.

She emphasized on the gunshot that went through the sole of his foot to the top, which was presented as evidence to the court earlier this week. She said this gunshot wound contradicts Hart’s statement of not shooting Mitchell when he was on the ground.

Ventiere also talked about other indiscrepancies of the defendant’s testimony versus evidence as well as the testimonies of witnesses that were brought in by the defendant.

Hart’s attorney, Jerry Blevins, mentioned Mitchell’s toxicology report that was shown as evidence earlier this week, which showed Mitchell had an alcohol blood level above the legal limit.

Blevins told the jury that Hart was not looking for a fight that evening, but rather the testimonies presented this week showed Hart’s actions were an attempt to protect his friends and himself.

Closing statements wrapped up around 4 p.m. and the jury began deliberations for a short time before Lee County Judge Christopher Hughes declared proceedings will resume at 9 a.m. Monday.