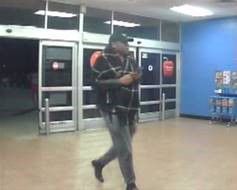 Valley police investigators are looking for a couple who appear to have stolen over $50,000 worth of cellphones last week, according to a Tuesday news release.

Reynolds said security video showed that a black man and black woman entering the store around 7 a.m. and went directly to the electronics department. He said the video shows the woman breaking into a drawer while the man served as a look out.

The couple put the phones — valued at over $50,000 — in an empty car-seat box and a backpack, then went through the self-check-out where they scanned the box, paid for it in cash and left, according to Reynolds.