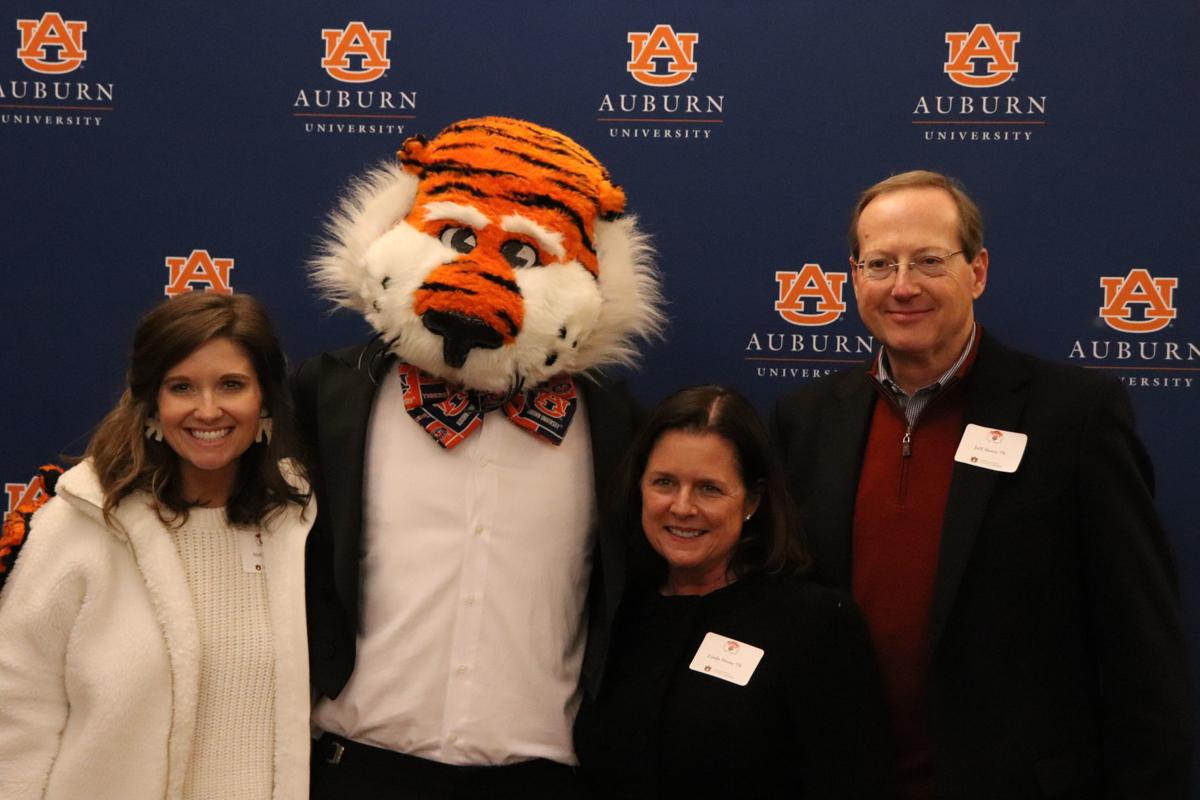 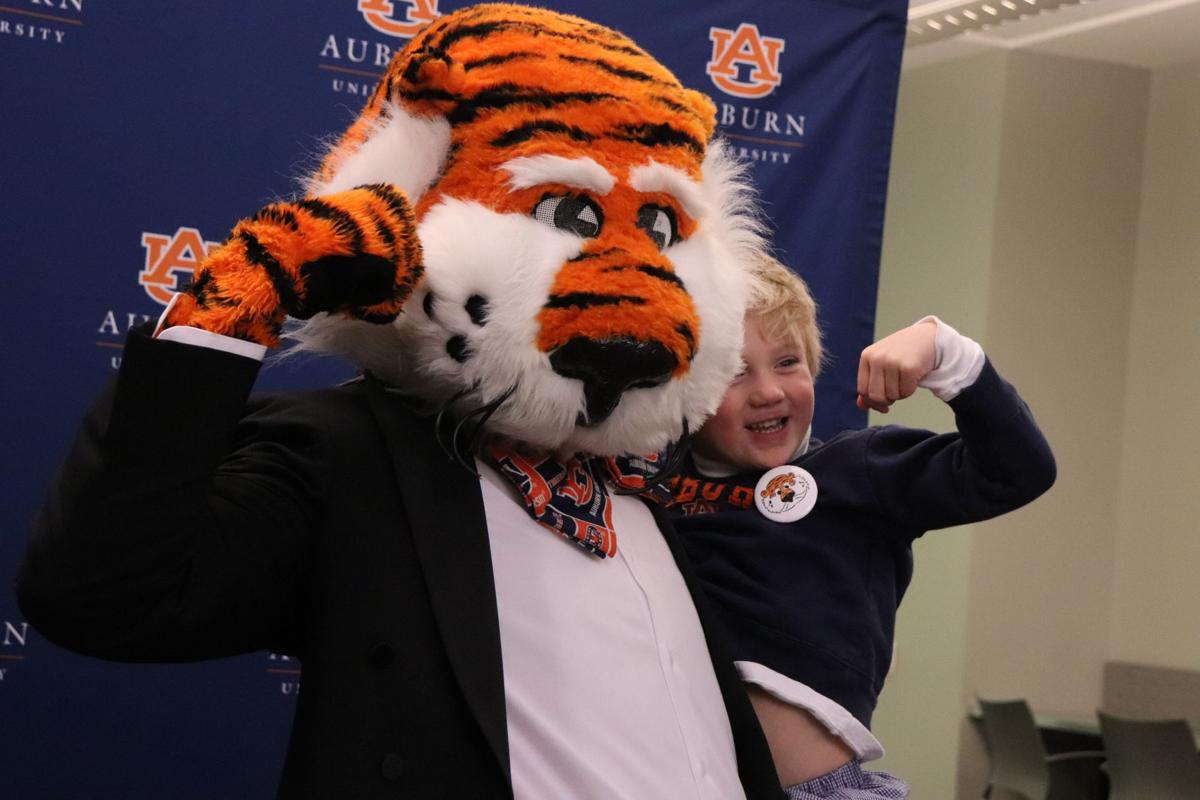 Aubie showed off his muscles during the opening of a new Aubie exhibit in the student center. 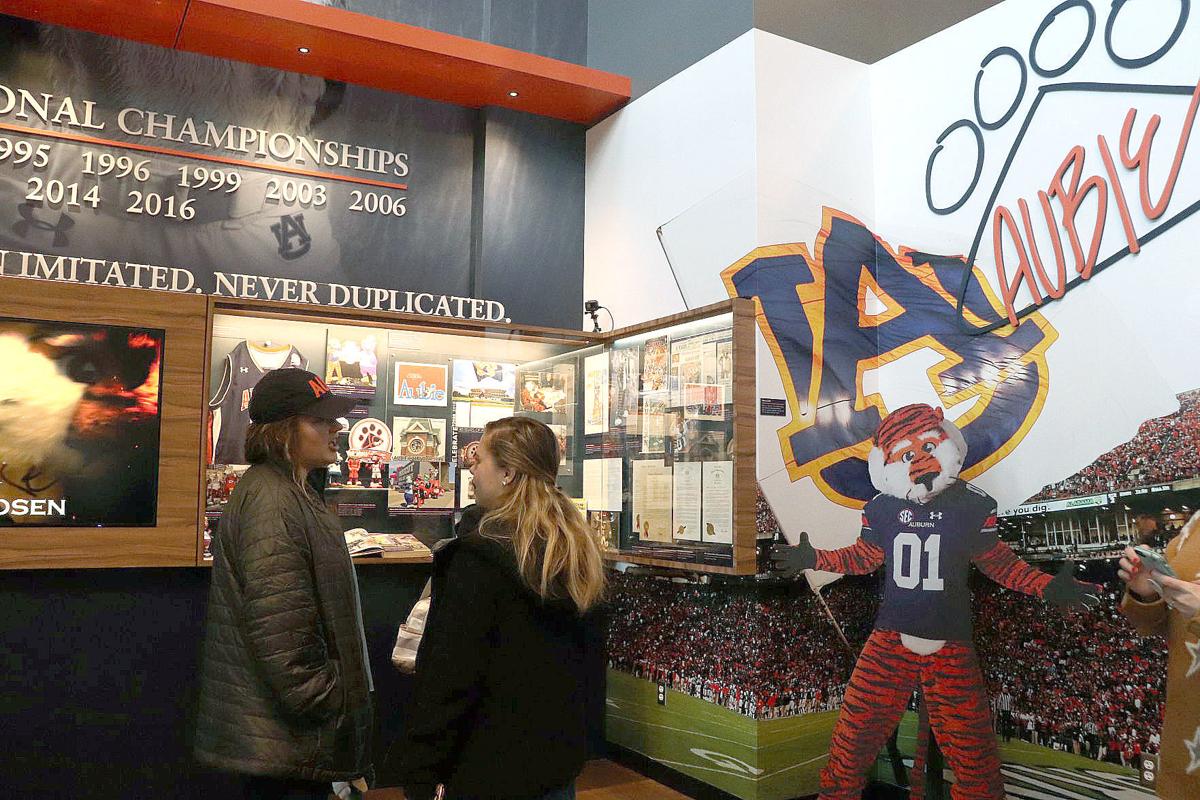 Auburn's new Aubie exhibit includes history, memorabilia and his national champion trophies. The exhibit was unveiled Saturday in the presence of Jeff Stone, who helped bring Aubie to life in 1979.

Aubie showed off his muscles during the opening of a new Aubie exhibit in the student center.

Auburn's new Aubie exhibit includes history, memorabilia and his national champion trophies. The exhibit was unveiled Saturday in the presence of Jeff Stone, who helped bring Aubie to life in 1979.

Aubie the Tiger, an Auburn institution, now has a place of honor with an exhibit in the Auburn University Student Center.

Every Auburn fan’s favorite mascot began as a cartoon character and evolved to a spot on Auburn programs. He finally took the form of a physical mascot in 1979 with the help of James Lloyd, Auburn spirit director for the Student Government Association.

The new exhibit dedicated to the cheerful and spirited tiger opened Feb. 1 with Jeff and his wife, Linda Stone, in attendance.

“Hopefully people will enjoy knowing the history of Aubie,” Jeff said. “He’s been around over 40 years now and he’s, like anything, has gone through a nice evolution and has grown and has touched a lot of people.”

Aubie has nine UCA Mascot National Champion titles and was inducted into the mascot hall of fame in 2006.

The exhibit includes a trophy case for Aubie’s awards, a screen that shows some of the exploits of the mascot, photos and memorabilia from over the years and more.

Stone, the SGA president in 1979, had a hand in raising Aubie, said Teresa Carden, development coordinator for student affairs.

“(People should) just explore some of the history and the memorabilia of Aubie and what he means to our campus and that he really is the spirit of Auburn and the Auburn family,” Carden said.

Although the exhibit originally began as a trophy case, it evolved into much more, she said.

“It’s really pretty unbelievable, we didn’t have any idea that it would be such a wonderful exhibit but it’s great for everybody who comes to Auburn,” Linda said. “Especially little kids can come and have their picture made with Aubie and watch the video.”

The exhibit is right inside the second-floor student center entrance, next to the James E. Foy Information Desk.

“We just wanted to have this dedication,” Carden said. “It was a trophy case; it turned into this whole experience of memorabilia and exhibit. It’s a place where all of our tours come in, our students and parents are touring, so they’re going to get to experience this.”

Stone said while the trophy case and the national championships are important, Aubie means more to fans than his titles.

“He’s just such a great ambassador, a great example of the whole Auburn experience and the Auburn spirit so I’m glad we were able to do more than just show the trophies,” he said.

Aubie attended the exhibit open as well, dressed in a dapper suit and posed for photos with guests and children.

Aubie deserved an exhibit, he said, similarly to other stars of the school in sports like football and basketball.

“Aubie is in the fabric of Auburn University and as I said a few minutes ago, Aubie is not a mascot, Aubie is part of the student experience,” Woodard said. “It’s the spirit.”

Aubie buttons were passed out next to a white cake decorated in orange and blue. A table set up with awards and trophies displayed the many accomplishments of the tiger over the years.

“Jeff and Linda were so sweet to start this process and it has morphed into this Aubie experience exhibit that will be great for generations to come,” Carden said.