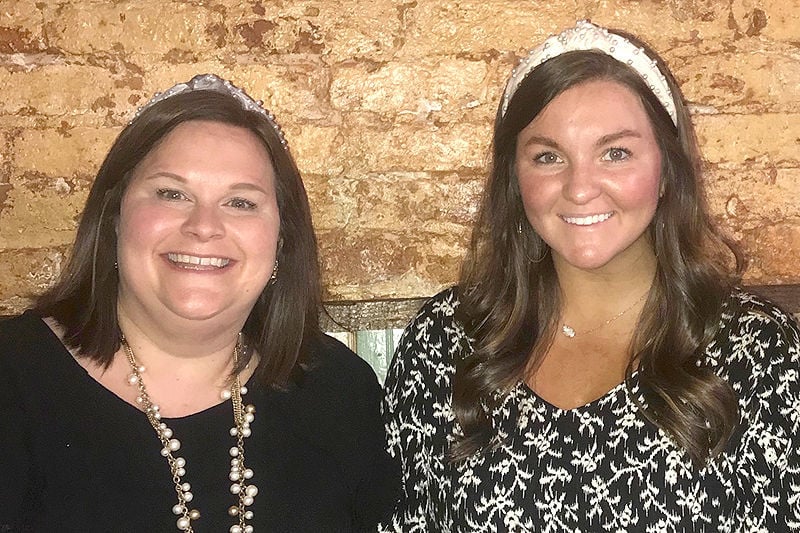 Valerie Smith and Clayton Harris have been busy filling and delivering Easter orders this week, a new and welcome source of revenue during the COVID-19 shutdown. 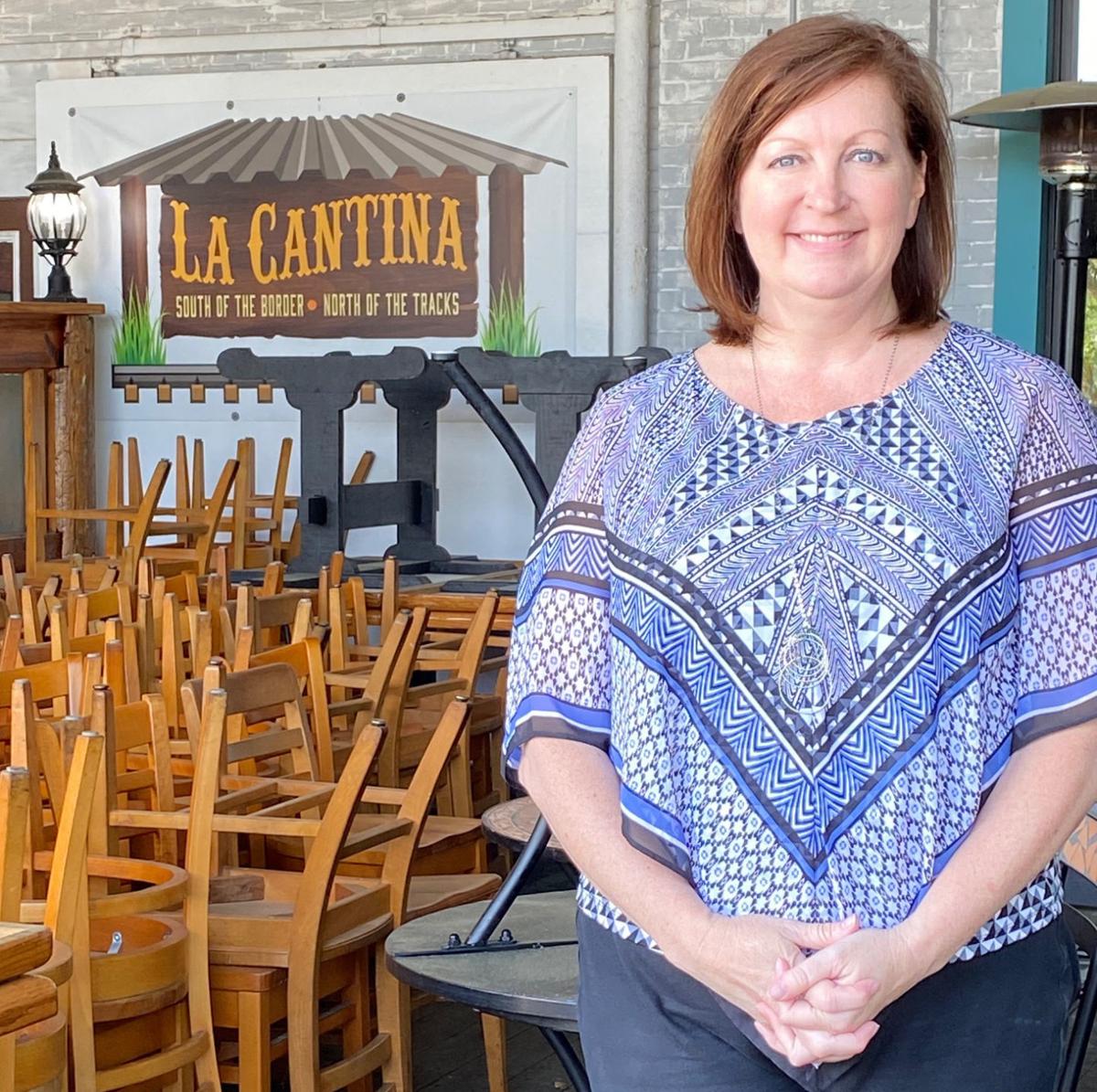 Jennifer Collins, who manages La Cantina in downtown Opelika for her family, said carryout business is up, thanks in part to the build-your-own family meal packs they have been selling. 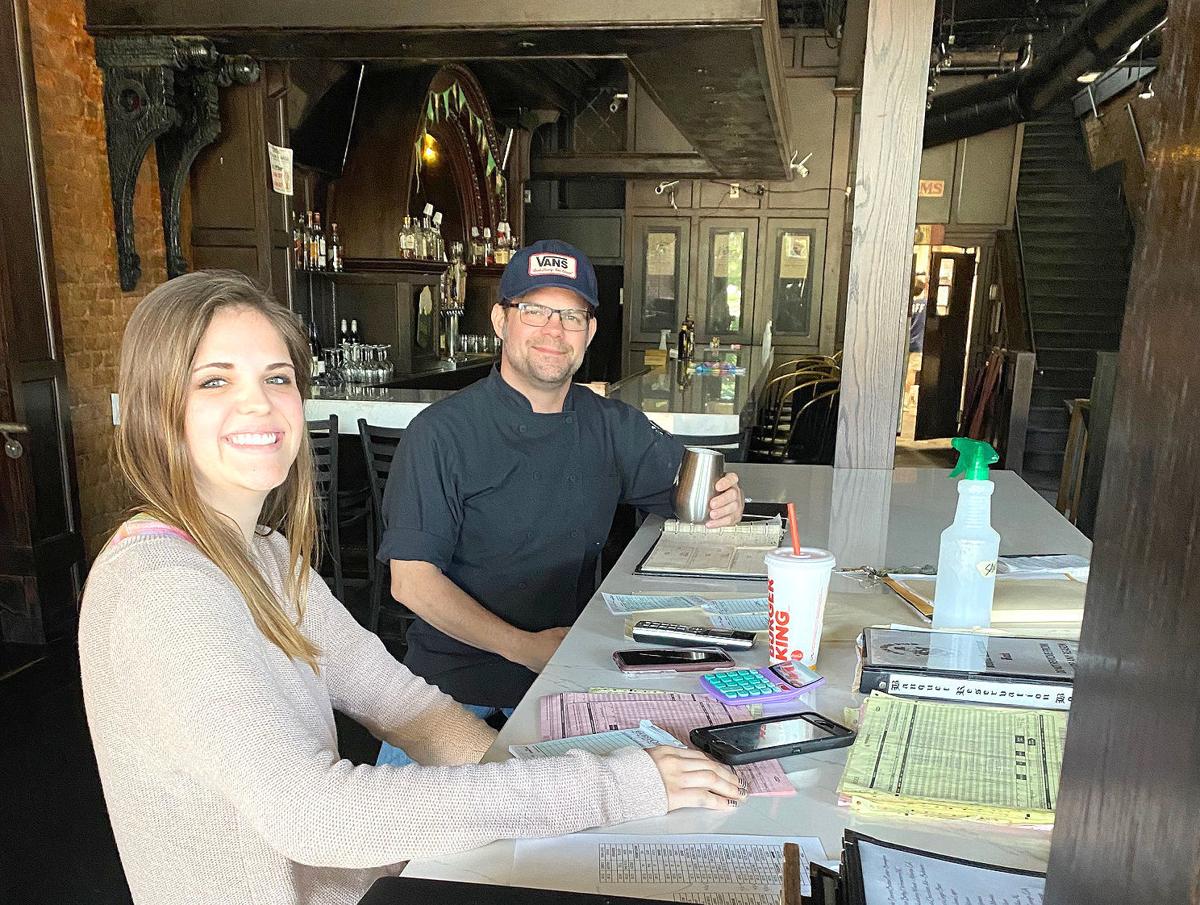 Maggie McBride and her father Chris go over bills before firing up their kitchen to handle the 3-8 p.m. carry-out rush at the Irish Bred Pub, 833 S. Railroad Ave., in downtown Opelika.

Valerie Smith and Clayton Harris have been busy filling and delivering Easter orders this week, a new and welcome source of revenue during the COVID-19 shutdown.

Jennifer Collins, who manages La Cantina in downtown Opelika for her family, said carryout business is up, thanks in part to the build-your-own family meal packs they have been selling.

Maggie McBride and her father Chris go over bills before firing up their kitchen to handle the 3-8 p.m. carry-out rush at the Irish Bred Pub, 833 S. Railroad Ave., in downtown Opelika.

So, what’s it like trying to keep a shop going in downtown Opelika during the COVID-19 outbreak?

“Oh, well, we’re not making what we made before,” said Southern Crossing owner Valerie Smith, “but we have actually been slammed this week with Easter. We implemented free delivery — we’ve never delivered before. And we’re doing curbside from 1-4 p.m. every day.”

There has been a big run on Easter baskets for the shop, which is on South Railroad Avenue next to Ma Fia’s Ristorante.

“We start deliveries at 5 p.m., and one day this week we did 18 deliveries. We were out until 8:30 that night. We’re working a lot harder than we normally work per sale. I would say because people are messaging us over social media of online. It’s been a learning curve because we don’t do this online usually,” Smith said.

Smith; her husband, Mike; and manager Clayton Harris have been pleasantly surprised by the business scared up simply by putting a bit of time into Instagram and Facebook.

“I really think it’s going to enhance our business once everything gets back to normal, I hope and pray that it’s going to just add to the business we’re already doing,” Smith said

The Smiths have already been approved for a federal Small Business Administration loan to help them weather the drop in business. That, and the Easter rush, have convinced Smith that they made the right call to stay open.

“I mean, not to like to toot our own horn, but we stuck through,” Valerie said. “I mean, we have stepped up and work every day.”

“It’s not just business hours,” Harris noted. “I was messaging with a customer until 11 o’clock last night about an order. There’s no (fixed business) hours, right?”

Valerie said it’s been a learning curve for her husband and co-owner, Mike.

“He has never done any other social media, so we’ve had to teach him how to answer, and it’s became hilarious,” she said, laughing. “He thinks he’s an influencer. Last night, he got an order to his watch, and he goes, ‘We got it. I got a message! I answered it!”

Main StreetAuburn grad Ken Ward has been adapting to the new situation himself. He’s just returned to work as executive director of Opelika Main Street after recovering from COVID-19 himself. He should be preparing for busy spring promotion season; however, his job for now is to network as much as possible with shop owners and help however he can.

“This would have been my usual heavy event-planning season, but we’ve kind of transformed ourself into almost entirely assisting businesses now,” Ward said. “So we’re trying to get the word out about the different programs that are out there different grant opportunities, different federal assistance opportunities, things like that.”

Jennifer Collins runs La Cantina, her family’s Mexican restaurant, on the north side of the railroad tracks downtown.

“We are hanging in there. Carry-out is up and we’re learning how to do that better and better,” Collins said.

Supply chain hasn’t been much of a problem, in part because Collins sources beef from her family’s own farm, but they have had to make the same painful workforce decisions that most other businesses have had to make. They had to lay off all but four employees.

“We are small on the staffing size, but mighty,” Collins said.

Carryout business has been dominated by La Cantina’s family style meals kits — the restaurant provides all the fixings and the customers’ build their meals to their own specifications. They also offer cocktail kits for people who want to personalize their own margaritas.

Irish BredIrish Bred Pub owner Chris McBride and his daughter Maggie have kept going, too, adapting to existing demands just like the ladies a few doors down at Southern Crossing.

“I feel that even when things get back to normal, we can probably look at possibly a 50 percent reduction in overall business,” Chris conceded. “And so you’re kind of putting some thought into what to do. We’ve already scaled down the menu, condensed the hours of operation 3-8 p.m. … It’s really just simple, basic restaurant management, what I was seeing” with regard to when customers were calling in orders and what they were ordering.

One innovation is the McBride Market.

Maggie worked for the Exceptional Foundation for adults with special needs before she was laid off in early March.

When Chris began to wonder what to do with all the fresh meat and produce in his coolers — and no customers in the bar and dining room to eat it — daughter and father launched the market.

The market caters to several of Maggie’s Exceptional clients who can’t shop for themselves.

Whatever money Chris makes from those food deliveries goes to helping the 22 employees he had to furlough in mid-March.

Chris can’t afford to bring his people back to work right now, but he does try to give them work when he can.

Chris sounds confident that Irish Bred will be able to gut out the COVID-19 outbreak.

He said is pursuing the federal loan help available, but, more importantly, he does a lot of the work around the place to hold down his overhead.

“I think I think we think we are. I didn’t have any dumb loans, and I was kind of set up to survive a little bit,” Chris said. “I’m the guy who, a lot of times people will see me and I’m doing this or that, and they ask: ‘Are you the chef? Are you the dishwasher?’ I’m like, ‘I’m the dishwasher, chef, owner.’”

Other shop owners have been ordering food and drinks to go, just to do their bits.

And landlords John and Ashley Marsh are working with him on the rent while everything is so tentative with the economy.

“The community has been outstanding. They’ve been calling in orders and just, you know, the effort is there, man,” Chris said. “It’s really been refreshing to see some real local love.”