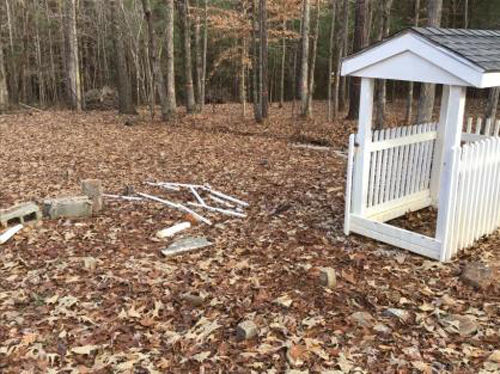 This shed, a Boy Scout project completed in the summer of 2019, was damaged by vandals in January, according to Lee County Cemetery Preservation Commission member Edna Ward.

This shed, a Boy Scout project completed in the summer of 2019, was damaged by vandals in January, according to Lee County Cemetery Preservation Commission member Edna Ward.

The Lee County Sheriff’s Office is investigating damage caused to County Line Baptist Church Cemetery in Salem on New Year’s Day, just a few days after a similar occurrence nearby.

Flint Hill Cemetery, 4 miles north of Salem, includes graves dating back to the 1850s, with the ancestors of several local families buried there. Ward said an obelisk was toppled from one of the older graves in late December and broke upon impact.

A remote camera caught several people wandering through County Line on one of the nights in question; however, Capt.Jimmy Taylor of the Sheriff’s Office told the O-A News that those appeared to be “ghost hunters” and that the vandalism can’t be tied to them at this time.

Anyone with information is asked to contact the Lee County Sheriff’s Office at 334-749-5651.