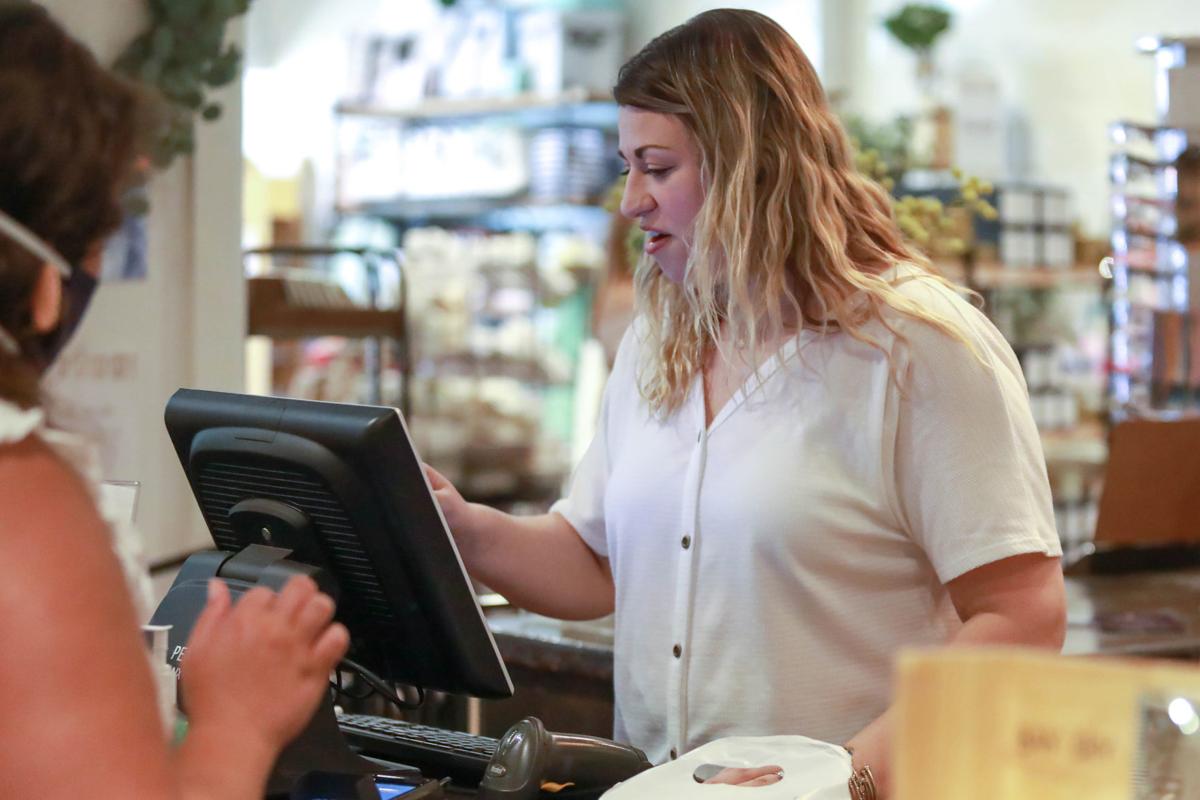 Rachel Acosta, assistant manager at Wrapsody, checks a customer out on Friday. Retail shops, which had been closed for weeks, were allowed to reopen Friday under Gov. Kay Ivey's Safer-at-Home order. 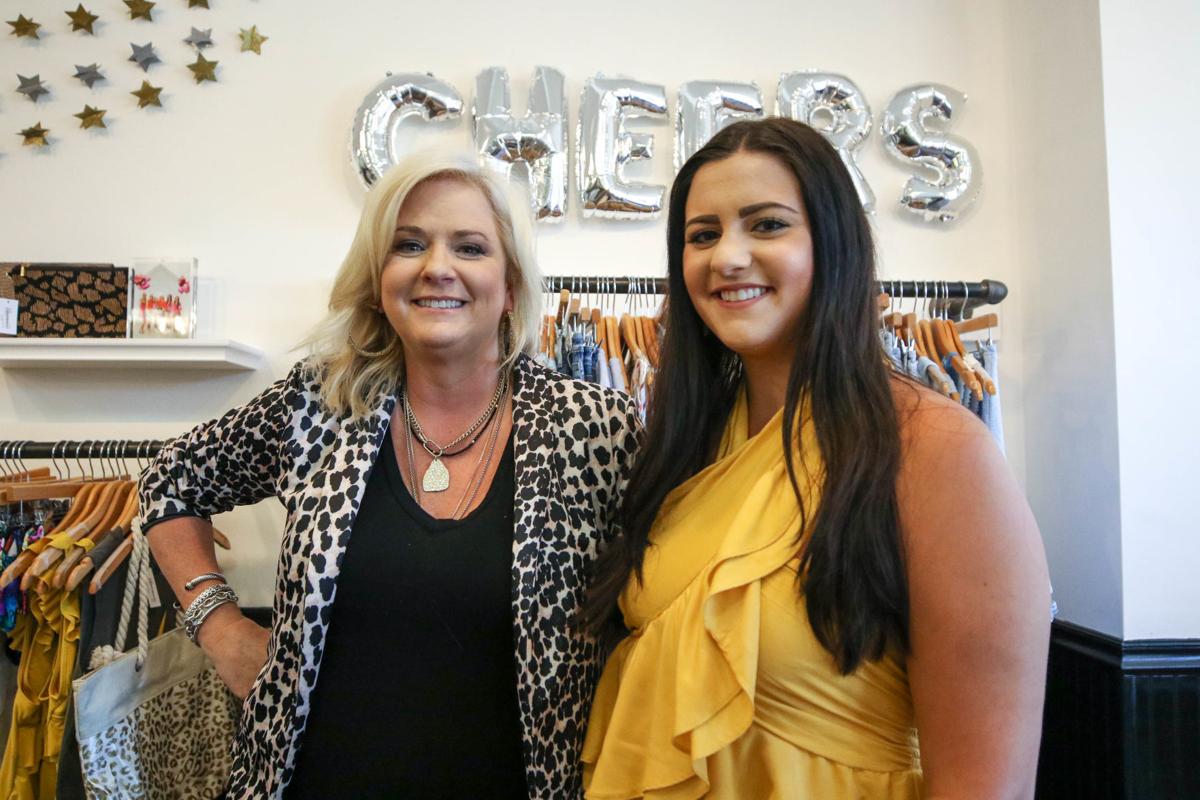 Fab'rik's Tanya Fuller, left, and Kelsey Fuller, right, celebrate opening the store for the first time in weeks on Friday. Retail shops, which had been closed for weeks, were allowed to reopen Friday under Gov. Kay Ivey's Safer-at-Home order.

Rachel Acosta, assistant manager at Wrapsody, checks a customer out on Friday. Retail shops, which had been closed for weeks, were allowed to reopen Friday under Gov. Kay Ivey's Safer-at-Home order.

Fab'rik's Tanya Fuller, left, and Kelsey Fuller, right, celebrate opening the store for the first time in weeks on Friday. Retail shops, which had been closed for weeks, were allowed to reopen Friday under Gov. Kay Ivey's Safer-at-Home order.

Friday was like a second grand opening for downtown Auburn store Wrapsody.

Wrapsody, along with numerous other stores in downtown Auburn, opened its doors for the first time in weeks Friday due to Gov. Kay Ivey’s new “safer-at-home” order, which allows retail stores to open in a limited capacity.

Several businesses in the downtown Auburn area welcomed customers back inside their stores after praying and hoping the time spent with their doors closed wouldn’t stretch much longer.

“This past month was just kind of crazy just having to wait, and wait, and wait to see when we’re going to be able to open up,” Kelsey Fuller, Fab’rik manager, said. “We were praying and wishing that May 1 would have been it, and then luckily it was.”

For some retail stores, just having their lights back on was one of the highlights of the day.

“It feels good to have the lights on, the store open,” Chloe Floyd, manager at Behind the Glass, said. “It’s really great to just welcome our customers back, and everyone’s been so happy to be out and about, so it’s just good times.”

Challenges before openingFab’rik, a locally owned franchise store, faced challenges during the state’s stay-at-home order, which forced its business to go totally to Instagram.

“It was really heartbreaking for us because as a franchise to a bigger company, so we’re locally owned here but we don’t have an online store, so the only way we were able to get any profit was through our Instagram sales,” Fuller explained.

“The main way we were able to get through it was just being really transparent with our customers and letting them know you know what we were going through and we just really needed their support through the quarantine.”

For most businesses, the biggest challenge during the time spent with retail stores’ doors closed was missing the face-to-face interaction with customers.

“Our online business has done really well, but we don’t get that one-on-one customer experience,” Floyd said.

Prepping for the dayMany stores had to rearrange and put extra cleaning measures in place before allowing customers back in their businesses.

Both Fab’rik and Behind the Glass deep-cleaned their stores before opening their doors on Friday, making sure everything was ready to go.

Wrapsody, on the other hand, has been deepcleaning the store twice a day.

“We have been really deep cleaning the store every morning and every night, and then every hour we touch it up here and there,” Acosta said.

All the stores have been putting added safety measures in place for their customers. Fab’rik has hand sanitizer located throughout the store and is constantly cleaning clothing racks and dressing rooms.

The store is also controlling the flow of traffic throughout the shop.

“We also have put in tape on the ground so there’s a pathway,” Fuller said. “It’s just a one-way path around the store rather than people going back and forth … so we’re maintaining the 6-foot distance throughout the store.”

Behind the Glass is requiring each customer in the store to wear a face mask and stay 6 feet apart while inside shopping.

“Everyone’s been grabbing them,” Floyd said about the face mask. “Plenty of people have come in already had some on. It’s been going really well.”

The turnoutMost downtown businesses said customer turnout was better than they could have hoped for.

“As soon as we opened at 11 a.m., we had a good bit of customers come in and all of them were able to find something,” Fuller said.

Acosta said that Wrapsody was busy since the doors first opened and the store is more than grateful for the community to be back out and supporting local stores.

“Ever since we’ve open our doors, it’s been busy and everyone’s just been great showing their support here with us,” she said. “We really appreciate everyone’s that’s come and shopped with us even during the whole situation. It’s been a great day.”

Downtown Auburn looked refreshingly familiar at lunchtime Friday — almost no parking, traffic backed up, and sidewalks and shops swarming with…