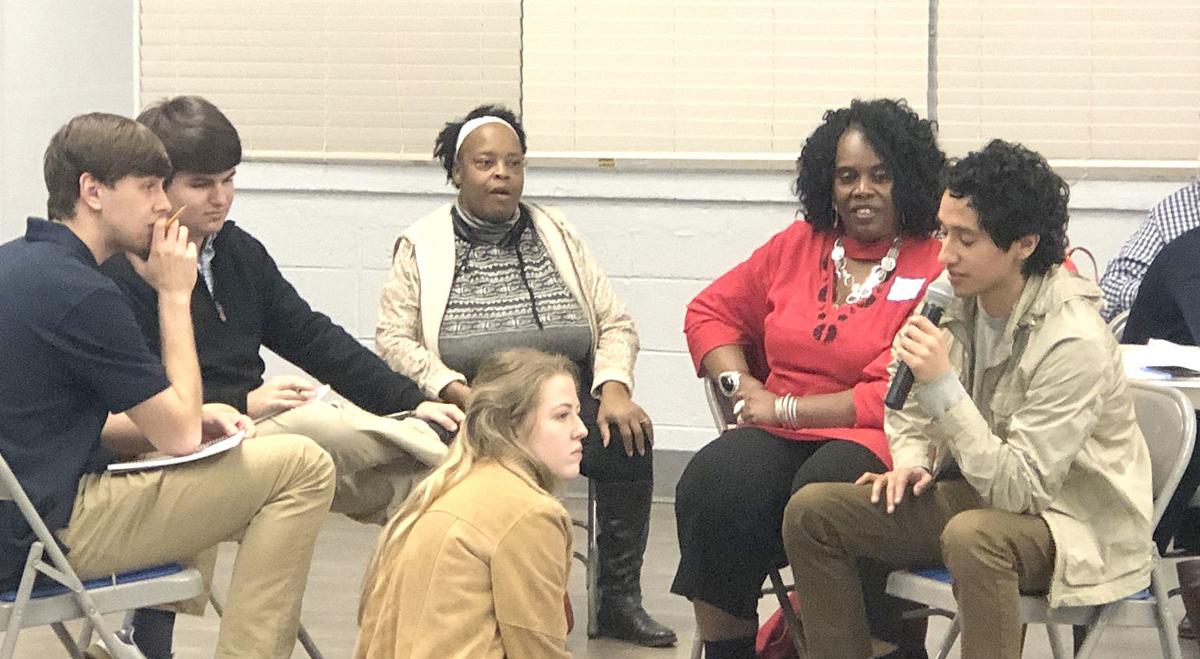 Eduardo Medina spoke about the history of Northwest Auburn, surrounded by residents and students during a 'Telling Our Stories' event at Boykin Community Center. 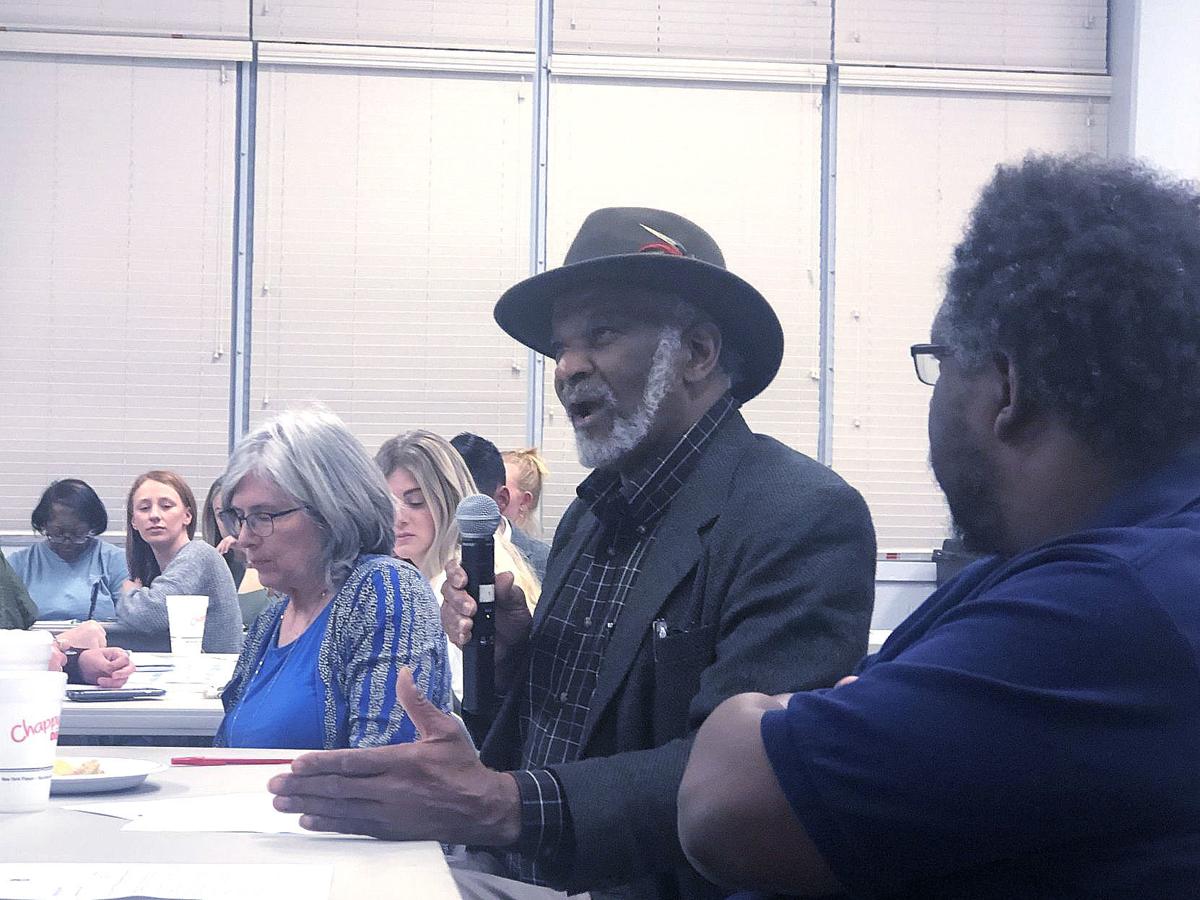 L.B. Jackson, a resident of Northwest Auburn, described the problems that face the community and how they can be resolved during a 'Telling Our Stories' event at Boykin Community Center with Auburn University students.

Eduardo Medina spoke about the history of Northwest Auburn, surrounded by residents and students during a 'Telling Our Stories' event at Boykin Community Center.

L.B. Jackson, a resident of Northwest Auburn, described the problems that face the community and how they can be resolved during a 'Telling Our Stories' event at Boykin Community Center with Auburn University students.

Auburn University students recently invited city residents to the Boykin Community Center on the city’s northwest side to hear their stories.

‘Telling Our Stories’ is a College of Liberal Arts project, part of a nationwide effort to sound out citizens about their lives, histories, experiences and the like.

Nan Fairley, who teaches Solutions Journalism, approached Gheni Platenburg, teaching multimedia journalism, for the project. Emily Myers’ macro social work class was in on it, too.

“I thought it would be great to do it on Northwest Auburn, because it’s a community that’s been historically underreported,” Platenburg said.

The meeting was an introduction for the students to the residents. The project will take the entire semester, as students meet further with neighbors and get their personal and community histories.

Discussion groupsGroups broke out around the Boykin auditorium, and students chatted with current and former city council members, commissioners, neighbors and everyone else who felt like speaking up.

“I chose to attend tonight because it’s important to me to dialogue with different people in the community,” said John Andrew Harris, former Lee County Commissioner. “See what’s going on, see some of their mindsets, how they feel about the community. We can learn from them as well as they can learn from us and a commitment like that by being here shows that we’re concerned about our community.”

Northwest Auburn is a community that has its own history, said one resident of Opelika, Oscar Penn, full of stories and people, local heroes.

“We need to have more meetings like this and dialogue,” Harris said. “Only way you’re going to learn about each other, you’ve got to become more involved and listen.”

L.B. Jackson, an Auburn resident, said he came on behalf of others who could not, he said.

“I feel that we have been disenfranchised as a community,” Jackson said. “As a people, there has not been an inclusive conversation of all the people that live and work inside of our community to help give a big, holistic picture of who we are, where we evolved from and how we are struggling to survive and move forward inside of a community that has for the last 20, 30 years, not considered us a real part of our community.”

Problems“Inclusion, diversity, clarity and gentrification in our community has been neglected,” Jackson said. “And I feel that is some of the most important issues that we have moving forward into today’s society. That will bring our kids back, that will bring our voters back into our community so that we are able to be represented properly.”

The city puts more economic resources into the other parts of Auburn than it does Northwest Auburn, Penn said.

“When they say ‘One Auburn’, it needs to look that way. When people come off that campus or come off Highway 14, they don’t need to be able to look to your left and say ‘oh I know what part of town that is.’ And everybody turn across the track and go to the right because they don’t feel like this side of town has (anything) to offer.

After the break out discussions, students took turns sharing what they learned about Northwest Auburn and its residents.

Medina, who also spoke with Auburn City Councilmember Connie Fitch-Taylor, said that one solution could be the installation of a museum to pass history along.

“You can tell (future generations) but if you don’t have any photographic (proof) to substantiate what you’re saying, it’ll just go in one ear and out the other,” Penn said. “That’s why it’s important to preserve Northwest Auburn. So the people of Northwest Auburn will realize that this is their home.”

Peter Taliaferro said that as journalists, it is important to tell the less-heard, less-known stories.

“I’ve learned how important this community is to those who reside in it and how it’s admirable because where I’m from, I wouldn’t see residents fighting this hard for their community and fighting so hard to have a voice,” he said.

Partnership“We’re not looking for a handout,” Fitch-Taylor said. “We want our voice to be heard because we don’t want it to be said that the students were able to come in and do something that we’ve been asking for all along.”

She said that after talking to the students, she saw their concern for the community was genuine.

“It’s not a charity case,” said Nathan King, a journalism student and sports editor of The Auburn Plainsman. “Nothing that’s being done wants to be viewed as a charity case, instead it needs to be set on the right path.”

King said that the right path will come from discussion and a bond between residents.

“No one is looking for someone else to solve problems for them,” said Jack West, a journalism student and managing editor of The Auburn Plainsman. “Every single person I talked to mentioned a way that they’re (for) this community, that they’re trying to sustain what they have.

“I think Mr. Penn even said it directly, it’s pulling yourself up by your bootstraps.”