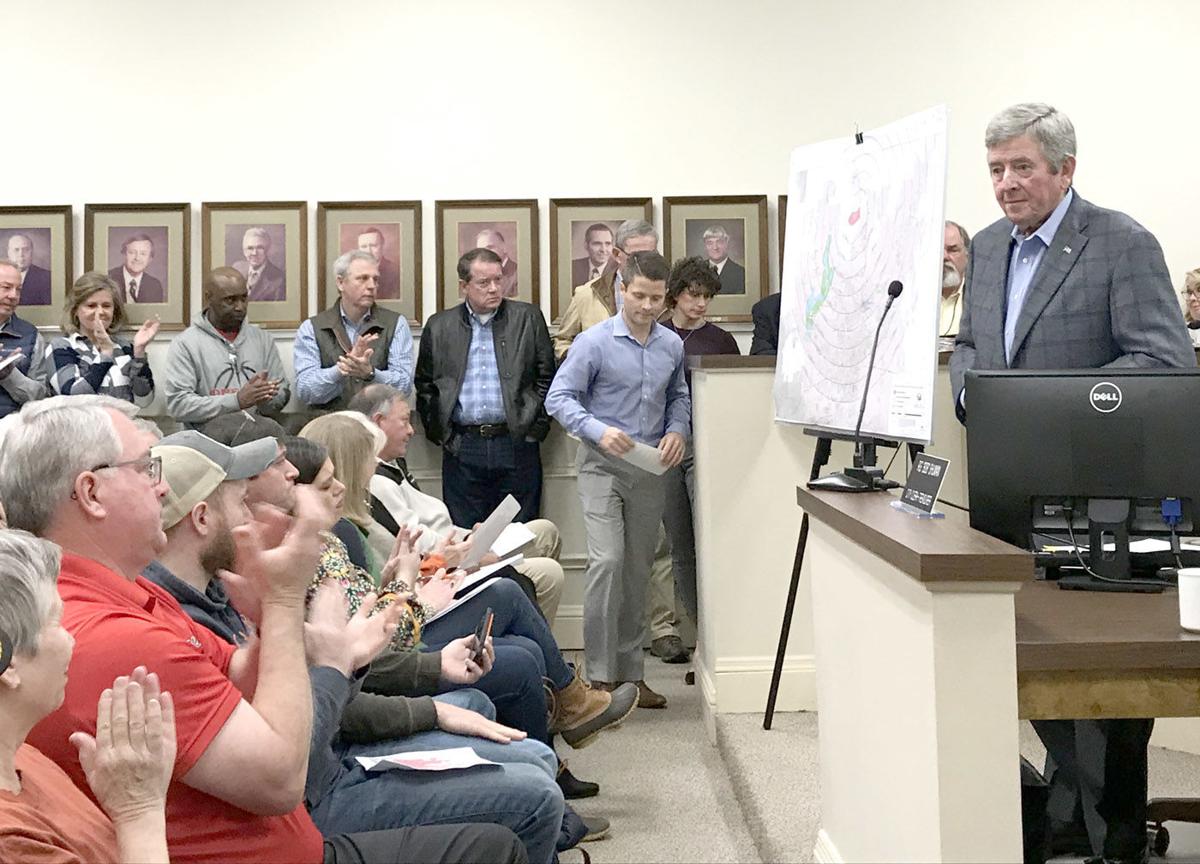 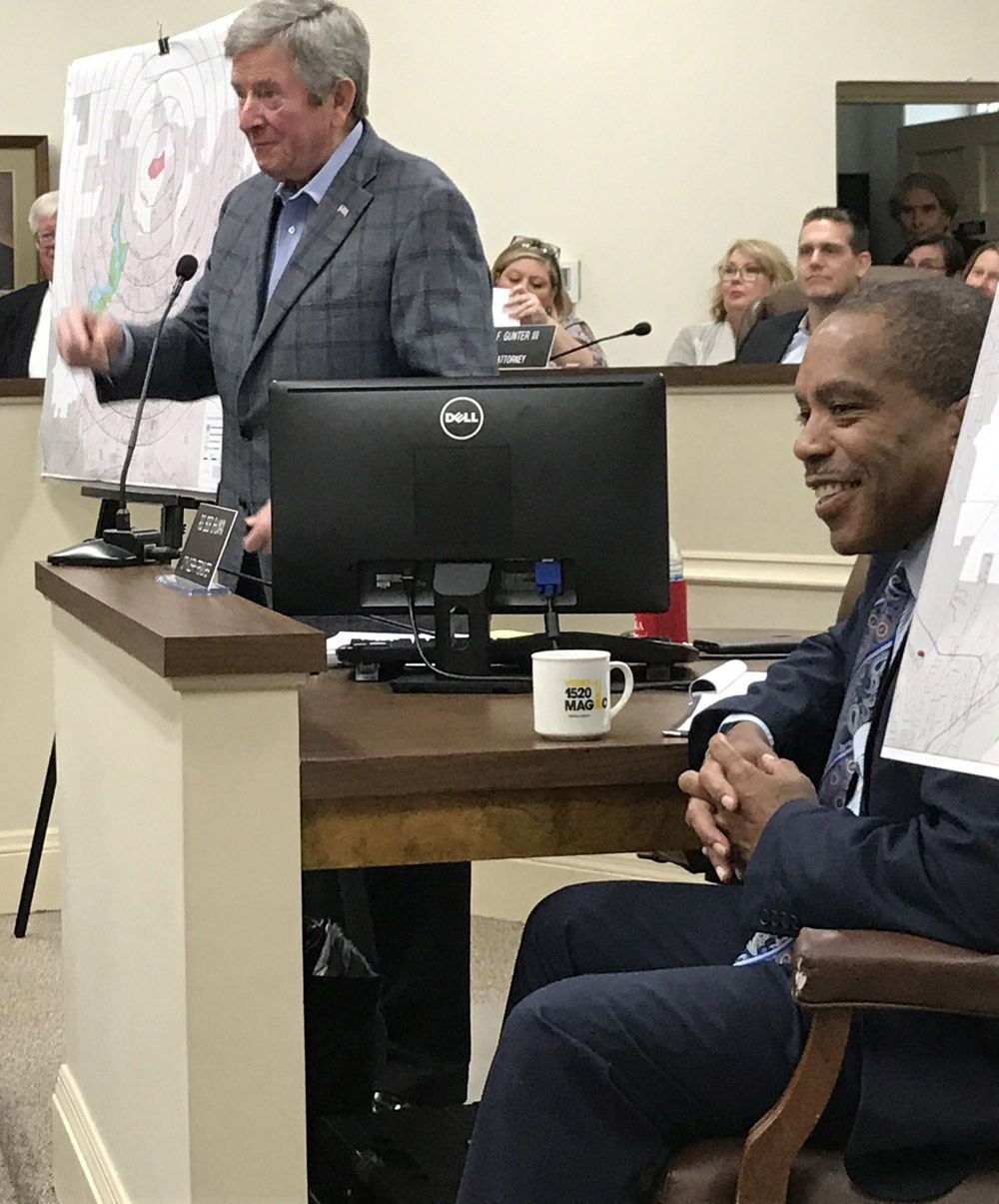 Opelika Mayor Gary Fuller joked Friday that no one has called him to say to say "Boy, we really need that quarry!" and drew laughs from Lee County District Five Commissioner Richard LaGrand Sr. and the standing room only crowd at City Hall.

Opelika Mayor Gary Fuller joked Friday that no one has called him to say to say "Boy, we really need that quarry!" and drew laughs from Lee County District Five Commissioner Richard LaGrand Sr. and the standing room only crowd at City Hall.

There wasn’t an empty seat to be found at Opelika’s City Hall on Friday morning as Mayor Gary Fuller rallied public opposition to a granite quarry proposed for just north of the city.

Creekwood Resources of Florence has applied for two permits with the Alabama Department of Environmental Management for the quarry, which would operate close to Saugahatchee Lake — the city’s main water supply — as well as city schools and Storybook Farm.

Gunter explained that if the quarry is approved, it could remain in operation for over 50 years, due to its granite deposits to the north of the city, its proximity to major highways and developments in and around the city.

He said stripping the land bare would allow more water to soak the limestone underneath, which could cause it to buckle and create sinkholes.

Having additional details of the proposed quarry’s operations, Gunter noted that after-hours work could extend to 24 hours a day, seven days a week, with at least 60 large diesel trucks moving granite per day.

Fuller joked that the public reaction to the plan has been uniformly against the quarry plan.

He said Creekwood officials touted the jobs the new operation would bring, and that he told them local labor pool is already stretched thin with demand for help across several industries.

“Nobody has called me and said, ‘Boy, we really need that quarry!’” Fuller said.

The Alabama Department of Environmental Management will take public comments through Feb. 20.

Gunter and Fuller told residents that they can download form letters of opposition from the city’s website, https://bit.ly/36H4gLj.

Opelika City Schools Superintendent Mark Neighbors spoke on the effect that the proposed quarry would have on the quality of life for the city’s children. Pollutants from the quarry are poised to affect Jeter Primary School, Morris Avenue Elementary, Opelika High School and Southern Union State Community College, he said.

With the latter three schools having physical education classes outside, students would be exposed to dust from the quarry that could contain silica, in addition to exhaust fumes from diesel trucks, Neighbors said.

“They cannot guarantee the quality of any carcinogen coming out of that quarry,” he said, emphasizing that OCS is “100 percent” committed to preventing the quarry.

Lee County District 5 Commissioner Richard LaGrand Sr. is on board with Fuller and Neighbors.

“I think everybody is pretty much speaking what they’re thinking … we need to make sure we can get those letters in, and I think the support will be so impressive that we will be heard,” he said.

Storybook Farm officials told the crowd that the quarry could upend its mission of bonding at-risk children with animals in a therapeutic setting.

“We believe that this proposed quarry would be devastating to our mission as a whole. Storybook is a place of hope, and what this quarry would bring is doubt — doubt for safety reasons, doubt for air quality, doubt for water quality. It’s going to affect Storybook from one end to the other,” said founder Dena Little.

Fuller was pleased with the large turnout of city residents, some even having to stand in the lobby due to the packed council chambers.

“I’m very, very pleased with the crowd and the presentations that Guy Gunter, Dan Hilyer and Dr. Neighbors all made. “The community is going to be together on this. We’re Opelika strong.”

Dena Little understands the value of the human-animal bond and how it effects people, having…