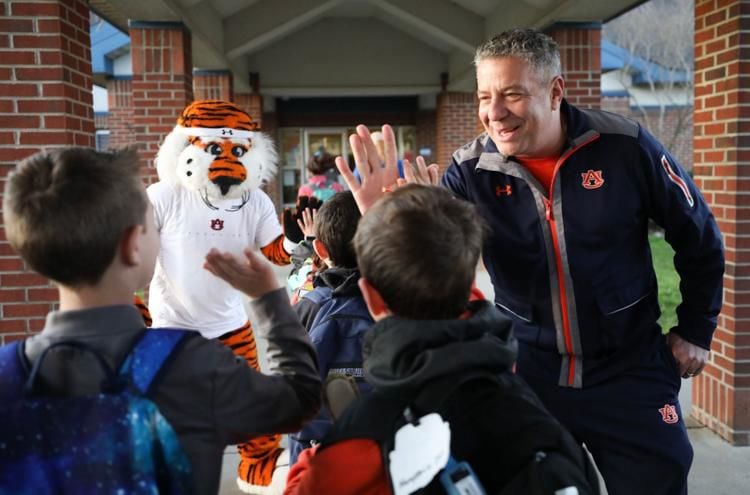 Auburn basketball coach Bruce Pearl gives high-fives to students returning to school at Beauregard Elementary School. It was the first day back to school after classmates were among the 23 killed in the March 3 tornado that hit this community. (Photo by Emily Enfinger/oanow.com) 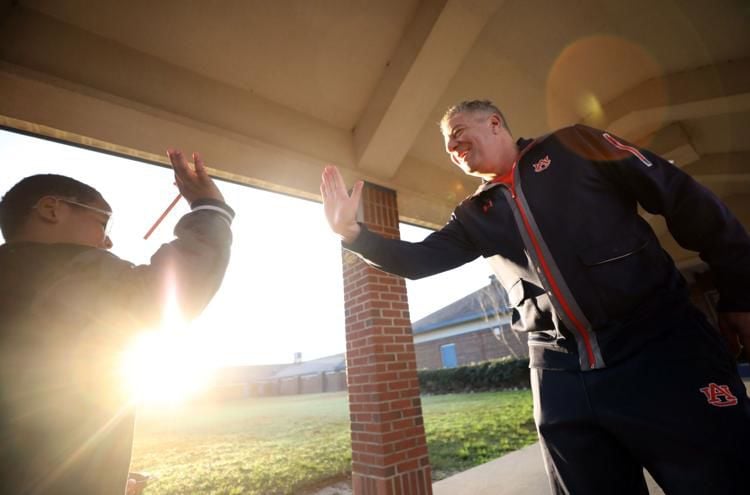 Auburn basketball coach Bruce Pearl gives high-fives to students returning to school at Beauregard Elementary School. It was the first day back to school after classmates were among the 23 killed in the March 3 tornado that hit this community. (Photo by Emily Enfinger/oanow.com)

Hunger and ambition are good motivators for second-chancers who know what it’s like to have both and the fear of losing them. That’s why if they do fall again, the hurt for them is much worse than for anyone else.

Aren’t we all sailors in that boat?

Along comes Nancy Armour, a sports columnist for USA Today who is paid to write something that will stand out from the crowd.

Friday morning on the day that Bruce Pearl and his team and fans should be pumped up and excited with glee in facing basketball-royalty North Carolina in the Sweet 16 – a major milestone for the Auburn program – comes Armour’s unfair and opportunistic ambush of Pearl in a nationally distributed column.

She then went on an all-out, full-court effort to trash Bruce Pearl, singling him out as the game’s “rot” for having lied about a barbeque, while quickly brushing past much-worse infractions from other schools and traditional basketball programs, including North Carolina and Kentucky.

“Somehow, he’s managed to turn sleaze into an attribute,” she writes.

“Part of the reason Pearl has survived for so long is that he talks a better game than almost anyone,” she continues. “As shrewd and calculated as he is charming, he can deflect from his flaws and failings so effectively you almost forget they existed.”

Oh really? Is that why, on a day when obviously the Auburn fan base is at fever pitch in hopes of a major upset and still with dreams of a national championship, Armour decided to remind us of this ancient history?

People in America are entitled to their opinions, including those in mainstream media who love to parachute into a story, wreak havoc, and then fly elsewhere to create the next victim of sloppy journalism while leaving behind hurt, damaged reputations and an embarrassing discredit to the profession.

Bruce Pearl is the kind of guy who privately visits sick children dying of cancer and gives them and their parents hope of living. Where was Armour during any of these hospital visits?

Bruce Pearl is the kind of guy who looks at a player like Austin Wiley who himself made a stupid mistake and says, "hey, I’m gonna help you become a better man, if you will let us work together to learn from our mistakes." Where was Armour during any of these life-changing second-chance encouragement talks with his beloved players?

Bruce Pearl is the kind of guy who buys an advantage, alright – just ask any penniless hungry college student standing in line for a game when Bruce strolls out to give them free pizza. Where was Armour for that kind of fun and spirit?

Bruce Pearl is the kind of guy that when he gets a call saying, “Hey coach, these little kids just lost classmates in the tornado. Do you want to come out and help welcome them back to class to encourage them? It’s at 6:30 in the morning.” And he says “Absolutely. I’ll be there! What else can I do?” Where was Armour while Bruce stood in the shadow of rubble from an EF-4 killer tornado and, having asked for volunteers, had a team that responded with 100 percent attendance to help as well?

Bruce Pearl is the kind of guy who will step away from practice before a game against his instate arch rival to interview with anyone who will listen on ways the experts say people can help prevent and AUTLIVE cancer? Did anyone in Auburn ever see Armour here in an AUTLIVE T-shirt to report that story?

Her column Friday was an unfair, unbalanced ambush that is a personal attack on someone the Auburn Family loves and appreciates for many more reasons than what she can see from an office hundreds of miles away.

Not in the South

Armour would have other reasons to have a hard time finding popularity in the South without bashing one of Tennessee’s and Auburn’s all-time favorite coaches.

Take for example her March 14 column: “It's time to stop playing national anthem at sporting events.”

In it, she writes: “Playing the anthem before our football, baseball, basketball, hockey and soccer games has become a lazy excuse for patriotism. Standing at attention – or a loose approximation of it – for 2 minutes no more proves love of country or gratitude for those who serve than wearing an American flag pin does.”

That kind of thinking doesn’t fly well in the conservative and patriotic Bible Belt.

Whether more through personal values or more through a deep, burning passion for the game, Bruce Pearl does not want to ever again risk being separated from it. His heart beats in cadence with the dribble of the ball on the court.

He has a wonderful wife, a loving family, a grounded spiritual faith, and even part ownership of a local business, but college basketball is this man’s mojo.

It also is foolish and ignorant for any fan of the game to suspect his success is chiefly attributed to ill-gotten recruiting gains rather than the brilliance and energy and dedication he brings to college basketball. Attending one of his intense practices or listening beyond his branding-effort talk reveals far more substance than salesmanship for those who know the difference.

Bruce Pearl loves Auburn, loves his players, loves his job, but even greater is his love of the game itself.

And sure, the bandwagon is fully loaded these days, and most of them quickly would spill off of it at the next sharp curve or two.

Winning and losing is all some fans see or even want to see, and that is part of the business-end of life for any coach at most any level.

Something deeper than that, however, exists here amidst the loveliest village on the plains. Something that most parachute journos like Armour will never see or understand from their preachy pulpits up on Bull Hill.

Put up or shut up

Eh, they might say, just a local-yocal, hometown newspaper editor trying to stand up for his coach?

Bruce Pearl isn’t just my team’s coach, nor my community’s most lively spokesman, nor one of our state’s most active civic citizens.

He is my friend. And a friend to many others around these parts.

Nancy Armour’s column without fresh substance tearing down a man on one of his biggest days symbolizes the rot in mainstream media.

College basketball is fortunate to have Bruce Pearl in the game.

But not nearly as fortunate as the Auburn Family to have him as one of us, win or lose on the court.

Until someone has something to prove we should feel otherwise, perhaps you people who want to tear down a man’s reputation for the sake of a hot read should instead have a job digging up scoops of something that smells as bad as your writing.