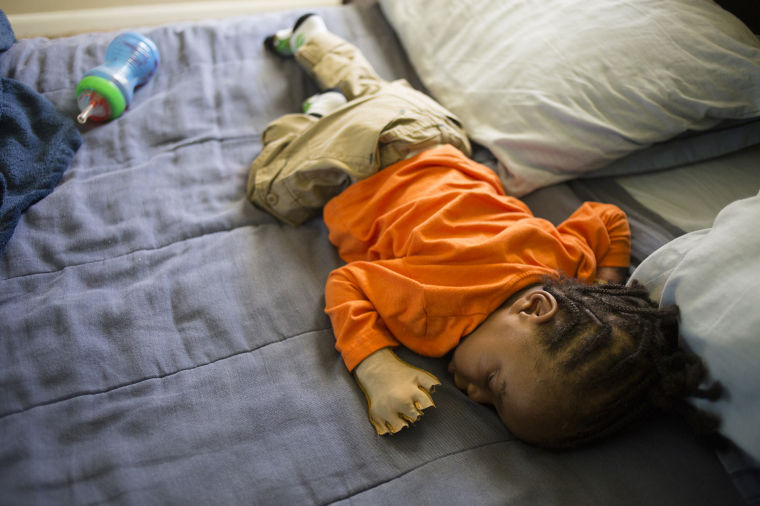 Tramaine Ridgeway Jr., an 18-month-old, sleeps on his mothers bed Friday in Opelika. Tramaine wears special gloves protecting his hand where he lost eight of his fingertips due to a scalding burn. Albert Cesare/Opelika-Auburn News 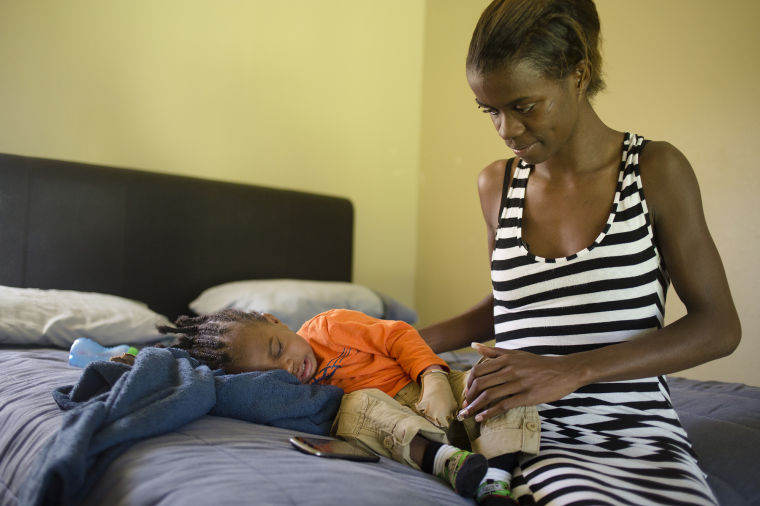 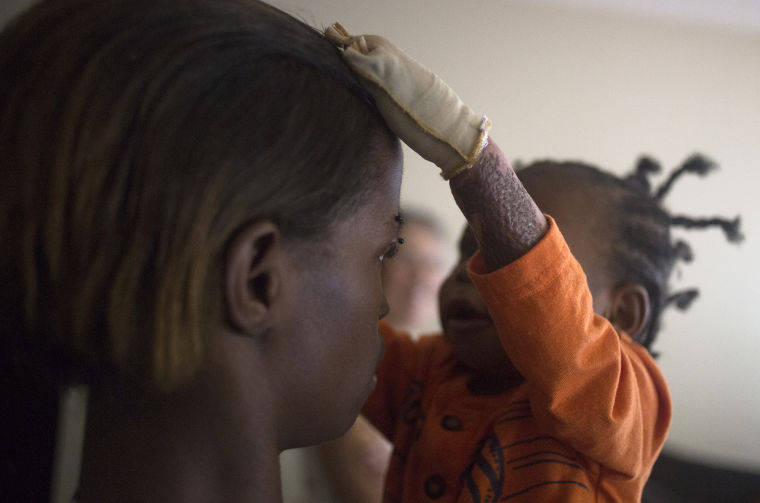 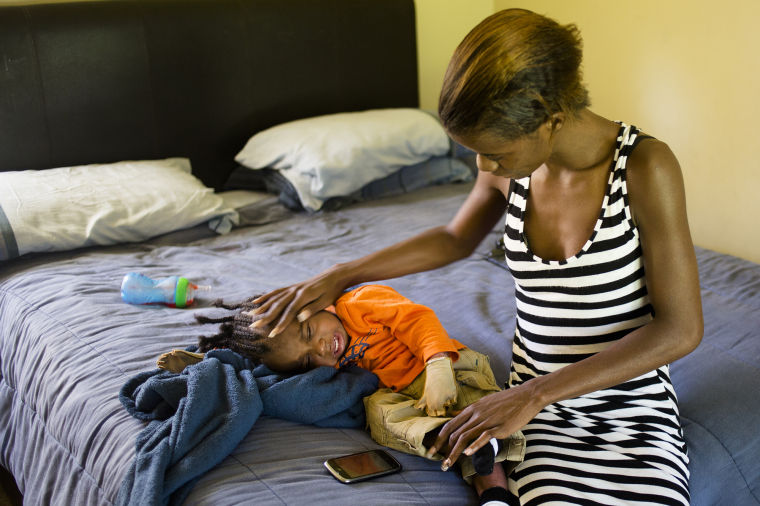 Stephanie Morgan comforts her son, Tramaine Ridgeway Jr., 18-month-old, back to sleep Friday in Opelika by rubbing the skin grafts on his leg which are healing. Tramaine had to have skin grafts on both his legs. Albert Cesare/Opelika-Auburn News

Tramaine Ridgeway Jr., an 18-month-old, sleeps on his mothers bed Friday in Opelika. Tramaine wears special gloves protecting his hand where he lost eight of his fingertips due to a scalding burn. Albert Cesare/Opelika-Auburn News

Stephanie Morgan comforts her son, Tramaine Ridgeway Jr., 18-month-old, back to sleep Friday in Opelika by rubbing the skin grafts on his leg which are healing. Tramaine had to have skin grafts on both his legs. Albert Cesare/Opelika-Auburn News

Eighteen-month-old Tramaine Ridgeway Jr. has a favorite fish in the aquarium at his physical therapist’s office.

“There’s a certain fish he likes. It only has one eye,” Ridgeway’s mother, Stephanie Morgan, said. “So we always sit by the fish tank at his appointments.”

Ridgeway, who is T.J. to his family, watches the fish twice a week as he sits in the waiting room of Rehab Works in Opelika. During his therapy, Ridgeway plays with physical therapists while relearning how to use his swollen hands.

“He won’t walk for them,” Morgan said. “Unless I put him down and walk away. Then, he’ll chase after me.”

Morgan has taken her youngest son to physical and occupational therapy several times a week for the past month. Before then, he spent a month at Children’s Hospital in Birmingham, recovering from burns and skin grafts he received after allegedly suffering abuse from his babysitters on Aug. 10.

While he was in their care, two women, Constence Gilbert, the aunt of Morgan’s 2-year-old daughter, and Linda Holmes, allegedly beat Ridgeway and scalded him with boiling water. Court records indicate both women are being held in the Montgomery County Detention Facility for aggravated child abuse on $100,000 bond.

Morgan said the women waited days to seek medical attention the baby. He was airlifted to Children’s from Montgomery with life-threatening injuries. Ridgeway suffered severe burns on more than 35 percent of his body. He lost eight of his fingertips and received skin grafts on his knees and thighs.

At the time Ridgeway was scalded, Morgan worked 4 p.m. to 2:30 a.m. six days a week at a Korean auto supplier company in Cusseta, Ga. Now, she is unable to work. Morgan has been carefully trained to care for her son.

“I make sure I’m getting him to all his appointments,” Morgan said. “It takes me about one and a half to two hours to give him his bath and massage his fingers every day…That’s the longest part, massaging.”

Morgan cleans Ridgeway’s tiny fingers and coats them with a yellow balm daily, sliding a small glove over each hand once she has finished.

“I do that last because he doesn’t like it,” she said. “He fights with me, exercising his hands.”

During his month-long stay at Children’s, Morgan drove from her home in Opelika to her baby in Birmingham and back, not wanting to leave her two other children, a 4-year-old son and 2-year-old daughter, in someone else’s care for extended periods of time.

“It was tiring,” Morgan said quietly. “I would spend about two or three days at home, sleeping a lot. And then I’d go back to Birmingham.”

Now, Morgan said she’s happy to be home. Her baby is happy, too.

“He’s getting better,” she said. “He’s been himself, eating the same, playing the same.”

But the healing process isn’t easy. Ridgeway’s skin grafts itch and his fingers hurt, often waking him from his sleep.

Ridgeway’s brother and sister help make him comfortable, too.

“They help me out a lot…My oldest son, he tells me, ‘Mom, T.J. needs a Band Aid,’” Morgan said. “My little girl, she can talk a little, but she doesn’t know. My son, he knows he’s got to be careful when he touches his hands.

“Having all of them in the house, and caring for T.J., it’s not hard,” she continued. “They help me.”

Most of Ridgeway’s therapy and medical bills are covered by Medicaid, and Morgan said her parents and cousin have provided invaluable support. Morgan’s mother’s church, First Baptist Church of Notasulga, also created an account to help ease the financial burden of frequent doctors’ visits and trips to Birmingham.

“So far, me not working and getting stuff paid,” Morgan said, “I’m managing.”

Morgan has also worked to make sure all three of her children experience a little happiness during a difficult time.

“We went to Cici’s. T.J. ate a lot of pizza,” she said. “I took them to a Lochapoka football game… He was sitting there, clapping his hands… He watched the cheerleaders and danced.”

Morgan added she hopes to take her children to the Montgomery or Birmingham Zoo soon.

Although Ridgeway is healing well, Morgan knows there will be more obstacles.

“They said he would need long term therapy,” she said, adding it will take time for her baby to be able to grab with his hands. “Hopefully, a year from now, his hands will be completely healed. I don’t know.”

Morgan said more challenges will come in a few years, when her children are old enough to start wondering what was done to their baby brother.

“That’ll be the hardest part,” she said. “Telling them what happened.”

But for now Morgan is thankful to be home with her three children and for the support she has received from the community.

“My cousin called around churches to put him in their prayers,” she said. “I used to be stressed all the time, but it doesn’t bother me…When he cries when I’m exercising his hands, it doesn’t bother me anymore. I’m just doing it because I want him to heal.”

Anyone interested in donating to the account established for Ridgeway can contact Josie Ettinger with First Baptist of Notasulga at 334-740-8780. Donations can be made at any Charter Bank branch to the account of Tramaine A. Ridgeway Jr.