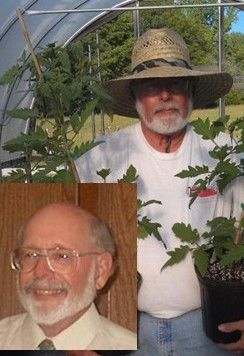 August 19, 1938 - September 5, 2019 "THE JOURNEY WAS MY REWARD" Edward F. Jacob died at East Alabama Medical Center on September 5, 2019. He lived in the Beauregard Community for the past 51 years. After retirement from the Department of Agriculture Engineering at Auburn University in 1991, he started Flower Zone Nursery and a Pick and Pay Vegetable farm. He enjoyed interactions with his customers at the Nursery and his weekly appearances as a supplier of quality vegetables and flowers at the Opelika Vegetable market, uptown market in Columbus, Ga and at Heritage Park on the campus at Auburn University until this past year. His passions included: Trains, Auto and Bike racing, music (both Opera and Classical) and particularly growing flowers along with caring for his devoted cats, Sweetie Pie and Mr. Quigley. He was preceded in death by his parents, Mrs. Katie O. Jacob of Auburn and Professor W. F. Jacob of Pocatello, Idaho, a sister, Katherine Anne Winston of Auburn. He is survived by a sister, Margaret (Maggie) Jacob of Pocatello, Id. and step-children, Jim K. Neiswinger (Christie), Cindy E. Harrison and Richard Eades (Shannon) all of Opelika, three special grandchildren that grew up next door, Chris Davis (Aimee) of Conway, SC, Holly Price (Jason) of Opelika and especially Brian Brooks who remained next door and fulfilled special needs for his Grandfather in his final days. Granddaddy Ed had several other grandchildren and great grandchildren along with special Friends Ms. Mickie and Mr. Arnold Eades. A private family service will be held at Town Creek Cemetery in Auburn. The family requests no flowers, however those wanting to might consider a donation to your favorite cancer fund. Jeffcoat-Trant Funeral Home is directing.

To plant a tree in memory of Edward Jacob as a living tribute, please visit Tribute Store.
+1
+1
Load entries