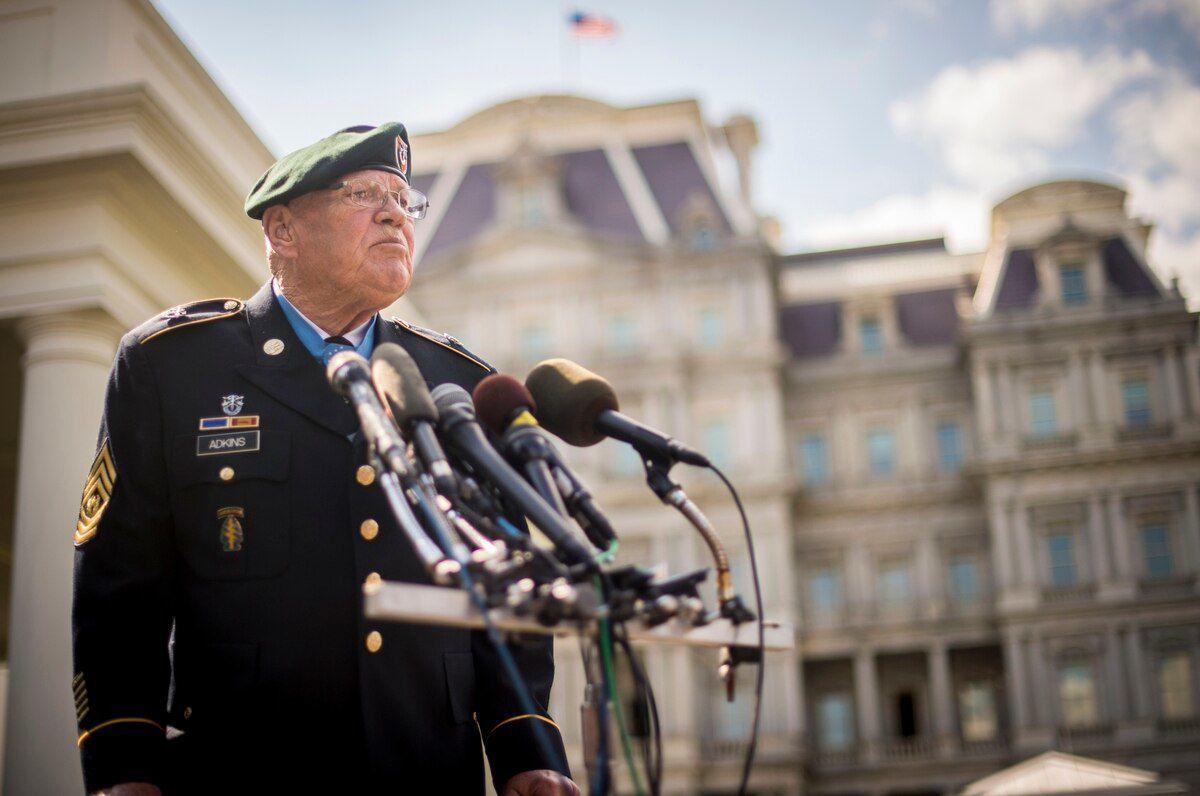 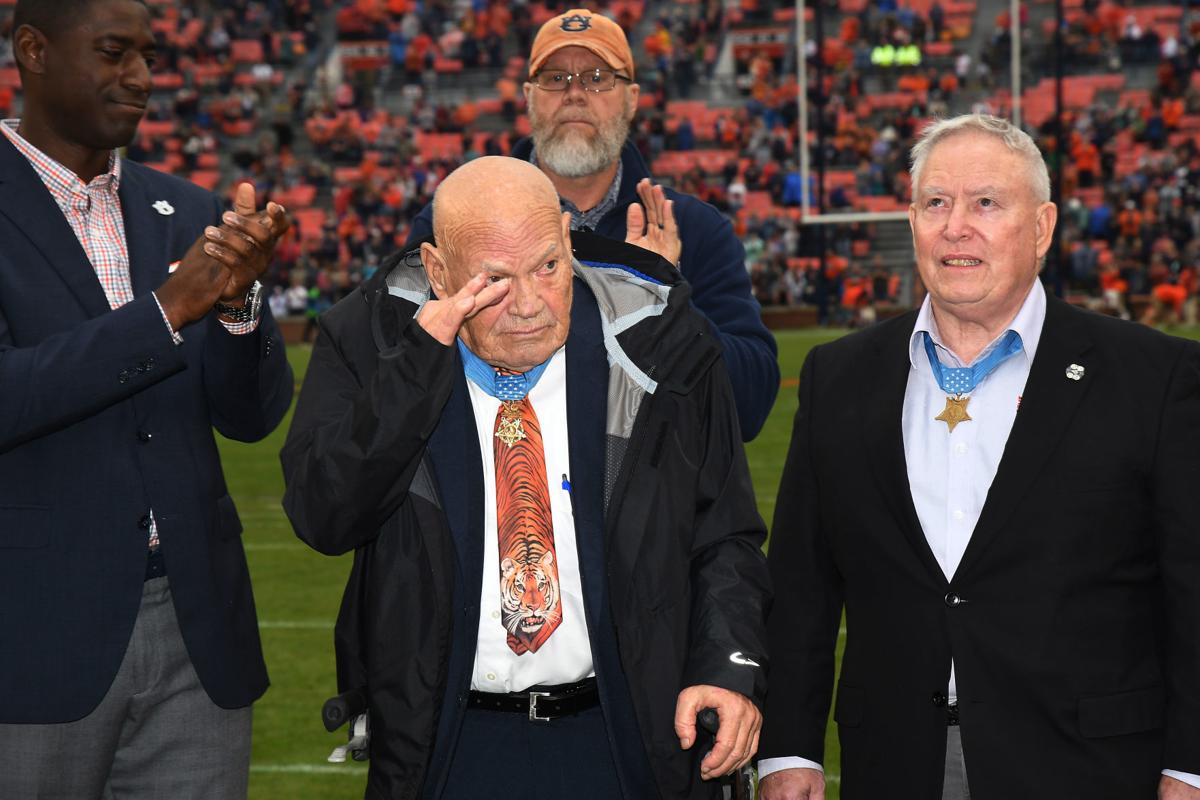 Medal of Honor recipient Bennie Adkins, center, gives a salute in a recognition ceremony during the Samford vs Auburn football game on Nov. 23, 2019. (Anthony Hall/Auburn Athletics) 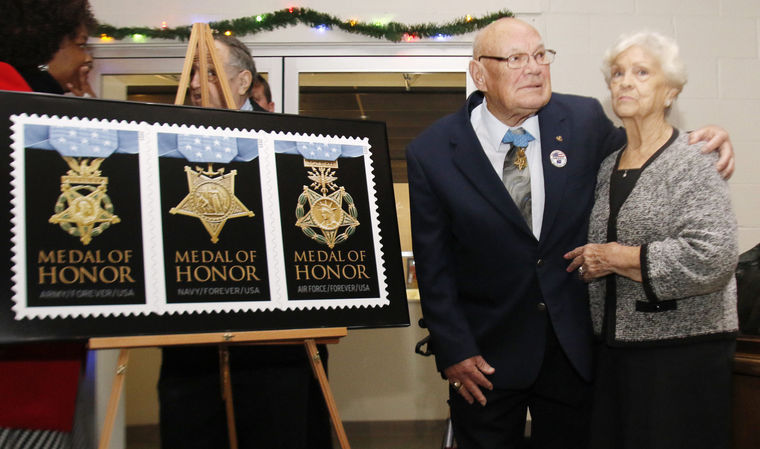 Retired Command Sgt. Major Bennie Adkins poses with his wife Mary during this 2015 ceremony with the U.S. Postal Service's dedication of a stamp to Vietnam veterans who earned the Medal of Honor. (Todd Van Emst/O-A News file)

Medal of Honor recipient Bennie Adkins, center, gives a salute in a recognition ceremony during the Samford vs Auburn football game on Nov. 23, 2019. (Anthony Hall/Auburn Athletics)

Retired Command Sgt. Major Bennie Adkins poses with his wife Mary during this 2015 ceremony with the U.S. Postal Service's dedication of a stamp to Vietnam veterans who earned the Medal of Honor. (Todd Van Emst/O-A News file)

Bennie Adkins was the kind of guy that would provide a grin and front-page story on any day of the week you could sit with him. I know, because I loved sitting with him.

Take, for example, the combat hero’s lighter side, such as the day he met Elvis Presley.

“I actually fingerprinted him,” Bennie later wrote about the meeting in his book. “To be honest, I was not really a fan of Elvis’s music, but I always respected him because he served his country.”

That was a short tale about the young Bennie Adkins, the simple Army clerk serving in Europe and long before he became the tough-as-nails Special Forces soldier that fought enemy combatants with a fierce tenacity and showed the courage and sacrifice that rightfully earned him our nation’s Medal of Honor.

But there was yet another side of Bennie Adkins, one that made him a local businessman proud to serve his community; and even closer to home, a family man who cared for his children, and a man who dearly loved and cherished his dedicated wife.

The first time I met Bennie, it seemed more important to him that I meet Mary.

Bennie seemed very proud of the fact that his loving wife had supported him through so many years of hardship, tough times and dangerous times.

Anyone who experiences a long marriage already knows how challenging that can be just to live with someone and get along sometimes, but to do it when a career of military service is involved, and a career that includes frontline combat and death, it takes a special bond.

Their four children noticed it, including son Keith.

“The spouses are the ones who are left behind. My dad’s legacy during his service, it is documented very well,” Keith said. “But what’s not documented is the sacrifice that she endured while he was gone.”

Bennie and Mary had that special bond — all the way up until death did they part.

Worthy of a book

Yes, Bennie’s legacy during his service is indeed documented very well, and should be, as it’s quite the story. Much of that story is told in his book, “A Tiger Among Us,” which was co-written by Katie Lamar Jackson, a talented writer from Opelika, Bennie’s hometown for most of his life.

“I am heartbroken that we’ve lost this amazing man,” Katie said a few short hours after his passing. “During the many hours we worked together on the book, I discovered that this larger-than-life hero was also a charming, funny and dedicated man who never took himself too seriously.

“He understood what it meant to overcome amazing odds, not just in battle but in life. And he sincerely wore the Medal of Honor as a tribute to his fellow soldiers — those who fought with him in Vietnam but also those who came before and after him in service to the nation.

“Command Sgt. Maj. Bennie Adkins will be missed here and across the country, but his legacy of dedication, resilience and commitment will be with us always.”

For those who don’t know the Bennie that comes from the story of wartime heroics, it is spellbinding.

It was 1966, early in the Vietnam War, when the career soldier faced death in battle over and over again, and won every time.

Bennie had first arrived in Vietnam in 1963, a young sergeant assigned as a replacement on a Special Forces team with the Green Berets.

Much of the time, being assigned as a “replacement” meant your predecessor was killed in action. That was especially so with Special Forces assignments.

Thus, Bennie was no stranger to combat before that fateful battle three years after his arrival.

Perhaps the best way to share that story is to read excerpts from the Medal of Honor citation itself:

“Command Sergeant Major Bennie G. Adkins distinguished himself during 38 hours of close-combat fighting against enemy forces on March 9 to 12, 1966. At that time, then-Sgt. First Class Adkins was serving as an Intelligence Sergeant with Detachment A-102, 5th Special Forces Group, 1st Special Forces at Camp “A Shau,” in the Republic of Vietnam.

“When Camp A Shau was attacked by a large North Vietnamese force in the early morning hours of March 9th, Sergeant First Class Adkins rushed through intense enemy fire and manned a mortar position defending the camp. He continued to mount a defense even while incurring wounds from several direct hits from enemy mortars.

“Upon learning that several soldiers were wounded near the center of camp, he temporarily turned the mortar over to another soldier, ran through exploding mortar rounds and dragged several comrades to safety. As the hostile fire subsided, Adkins exposed himself to sporadic sniper fire and carried his wounded comrades to a more secure position at the camp dispensary.

“Sergeant First Class Adkins exposed himself to enemy fire transporting a wounded casualty to an airstrip for evacuation. He and his group then came under heavy small arms fire from members of the Civilian Irregular Defense Group that had defected to fight with the North Vietnamese.

“Despite this overwhelming force, Adkins maneuvered outside the camp to evacuate a seriously wounded American and draw fire away from the aircraft all the while successfully covering the rescue. Later, when a resupply air drop landed outside of the camp perimeter, Adkins again moved outside of the camp walls to retrieve the much needed supplies.

“During the early morning hours of March 10th, enemy forces launched their main assault. Within two hours, Sgt. 1st Class Adkins was the only defender firing a mortar weapon. When all mortar rounds were expended, Adkins began placing effective rifle fire upon enemy as they infiltrated the camp perimeter and assaulted his position.

“Adkins then withdrew to regroup with a smaller element of soldiers at the communications bunker. While there, he single-handedly eliminated numerous insurgents with small arms fire, almost completely exhausting his supply of ammunition. Braving intense enemy fire, he returned to the mortar pit, gathered vital ammunition and evaded fire while returning to the bunker.

“Because of his efforts to carry a wounded soldier to an extraction point and leave no one behind, Sergeant First Class Adkins and his group were unable to reach the last evacuation helicopter. Adkins then rallied the remaining survivors and led the group into the jungle — evading the enemy for 48 hours until they were rescued by helicopter on March 12th.

“During the 38-hour battle and 48-hours of escape and evasion, Adkins fought with mortars, machine guns, recoilless rifles, small arms, and hand grenades, killing an estimated 135-175 of the enemy and sustaining 18 different wounds.

“Sergeant First Class Adkins’ extraordinary heroism and selflessness above and beyond the call of duty are in keeping with the highest traditions of the military service and reflect great credit upon himself, Detachment A-102, 5th Special Forces Group, 1st Special Forces and the United States Army.”

At the White House

Opelika Mayor Gary Fuller is another who knows well how hard Bennie, an Oklahoma native, tried to represent not just himself and the Army, but his eventual home community of Opelika.

“My all-time-favorite story that I would kid Bennie about involved his Medal of Honor ceremony at the White House,” Fuller shared shortly after Bennie’s death. “Unfortunately, I had to be in Japan on city business and was unable to attend the ceremony.

“Bennie laughed and said when he and his family were taken into the Oval Office before the ceremony, the president was saying ‘Opellika or Opeleeka.’ Bennie explained it was ‘O-pa-like-uh.’

“The president practiced it a few times and nailed it during the ceremony. What led me to believe Bennie had worked with him was the little longer ‘O’ from President Obama before finishing with ‘pelika.’”

Whether it was a meeting in the White House or walking out to the 50-yard line for a coin toss at the Super Bowl on national television, Bennie always represented his hometown with dignity and honor.

After retirement in 1978 at the rank of command sergeant major, Bennie went on to earn a Bachelor’s degree and two Master’s degrees from Troy University, later building an accounting firm which he headed for 22 years until the time of his retirement, according to his family.

In 2017, he established The Bennie Adkins Foundation, with the mission of providing educational scholarships to Special Forces soldiers.

Bennie and his wife Mary are survived by daughter Mary Ann Adkins Blake (David), sons Michael Adkins (Christine), and W. Keith Adkins (Jaime), as well as many grandchildren and great-grandchildren.

The family hopes to plan a local memorial service for friends and supporters in the Opelika-Auburn area, but the timing will depend on when it is safe to gather during or after the coronavirus pandemic, which is blamed for Bennie’s death.

More certain, however, is the final resting place for Bennie.

It will be in Arlington National Cemetery.

Next to his wife, Mary, who already is there waiting for him.

Rest in peace, and: Thank you.

Troy Turner is editor of the Opelika-Auburn News. He can be contacted at tturner@oanow.com and followed on Twitter @troyturnernews.com.