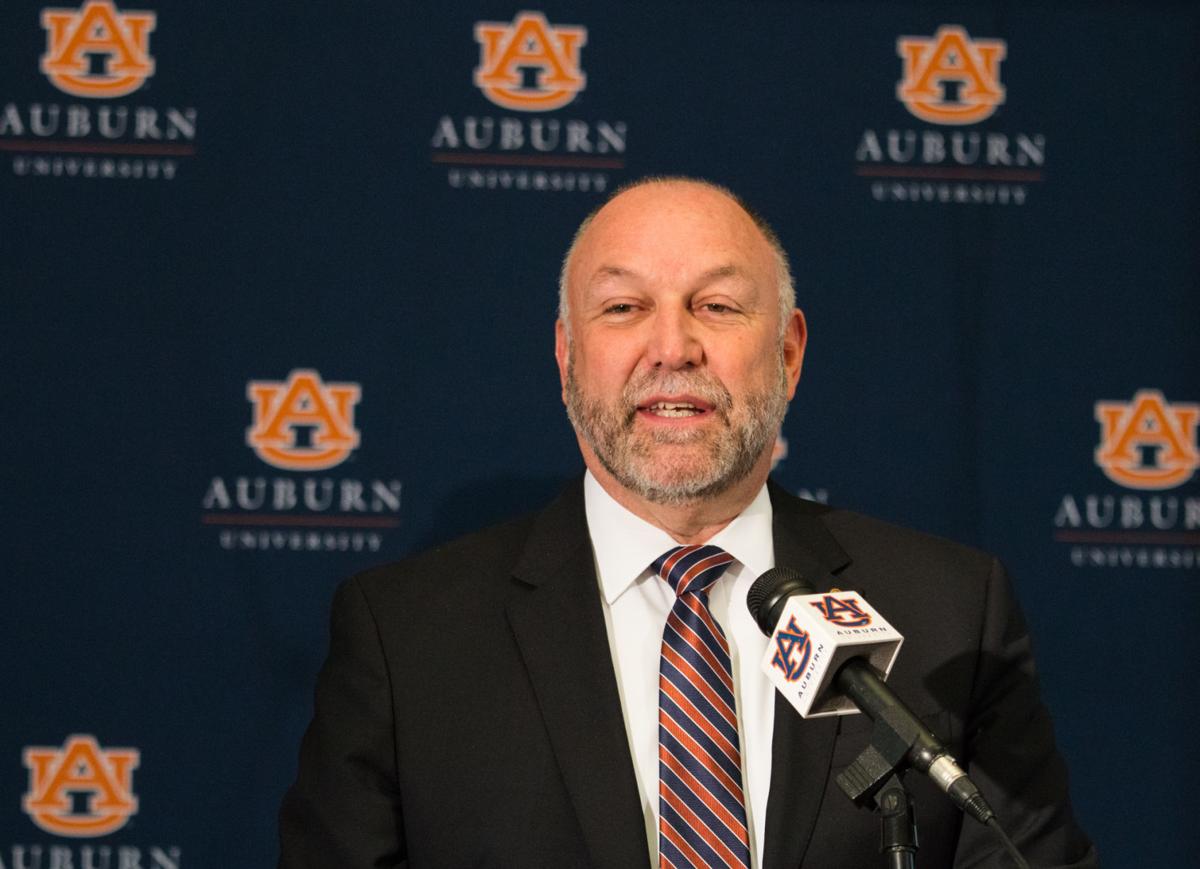 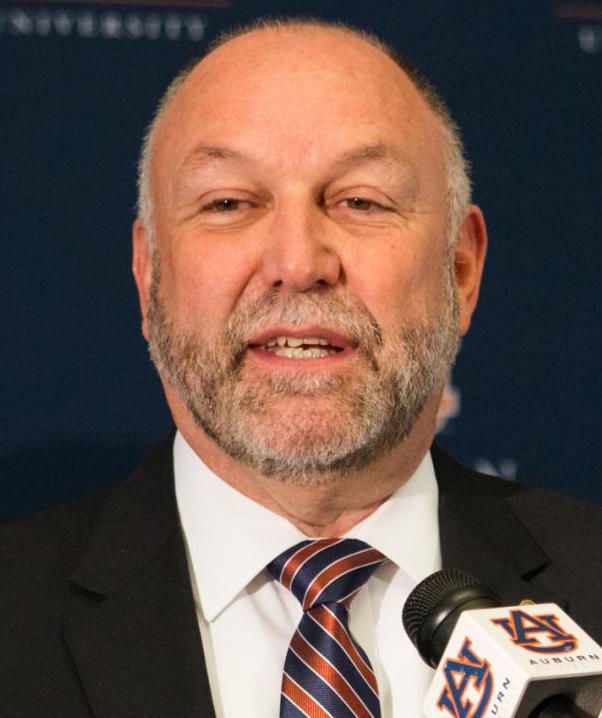 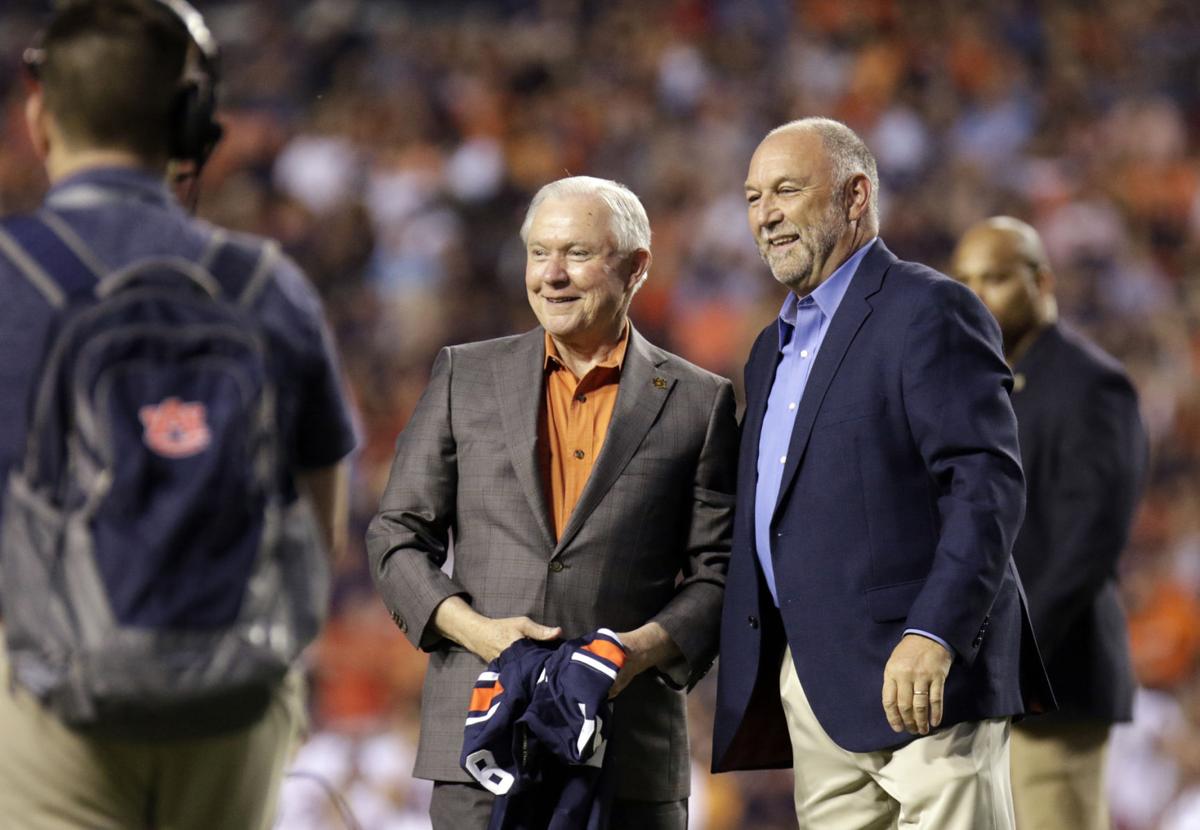 Former Attorney General Jeff Sessions (left) smiles for a photo with former Auburn University President Steven Leath during a break in the first half of the 2018 Auburn vs. Arkansas game at Jordan-Hare Stadium in Auburn. (O-A News file photo) 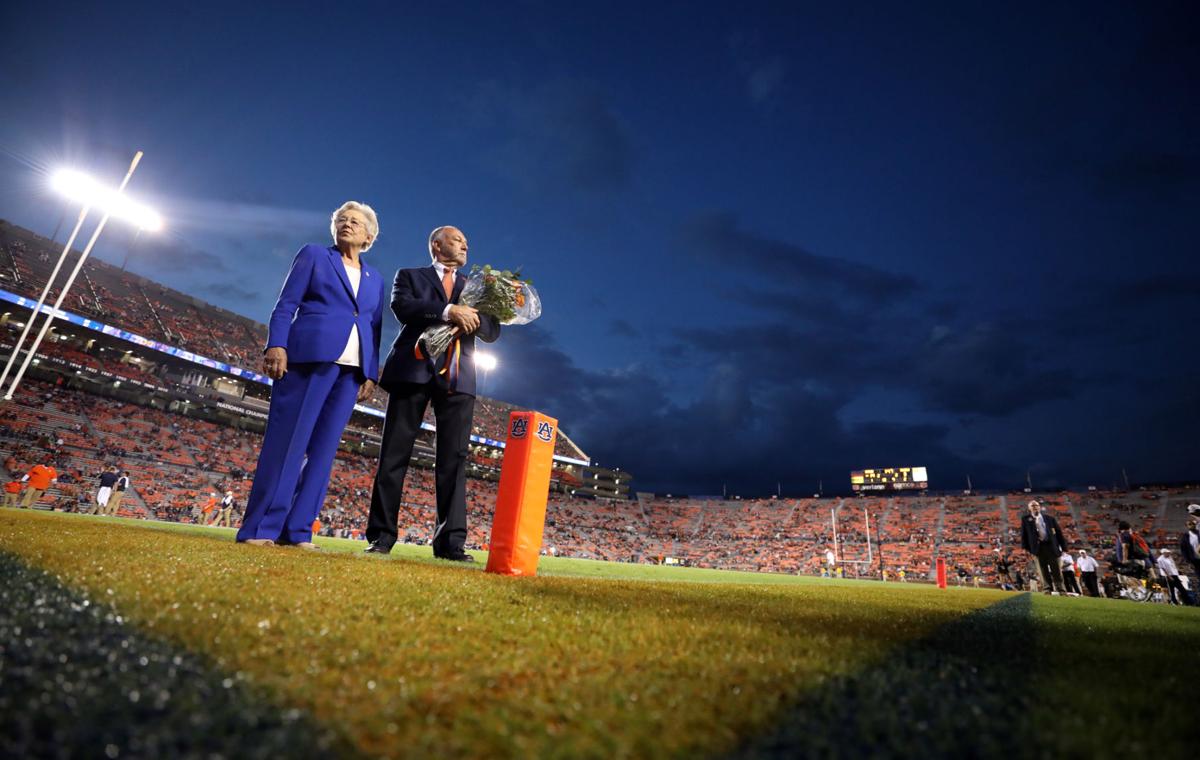 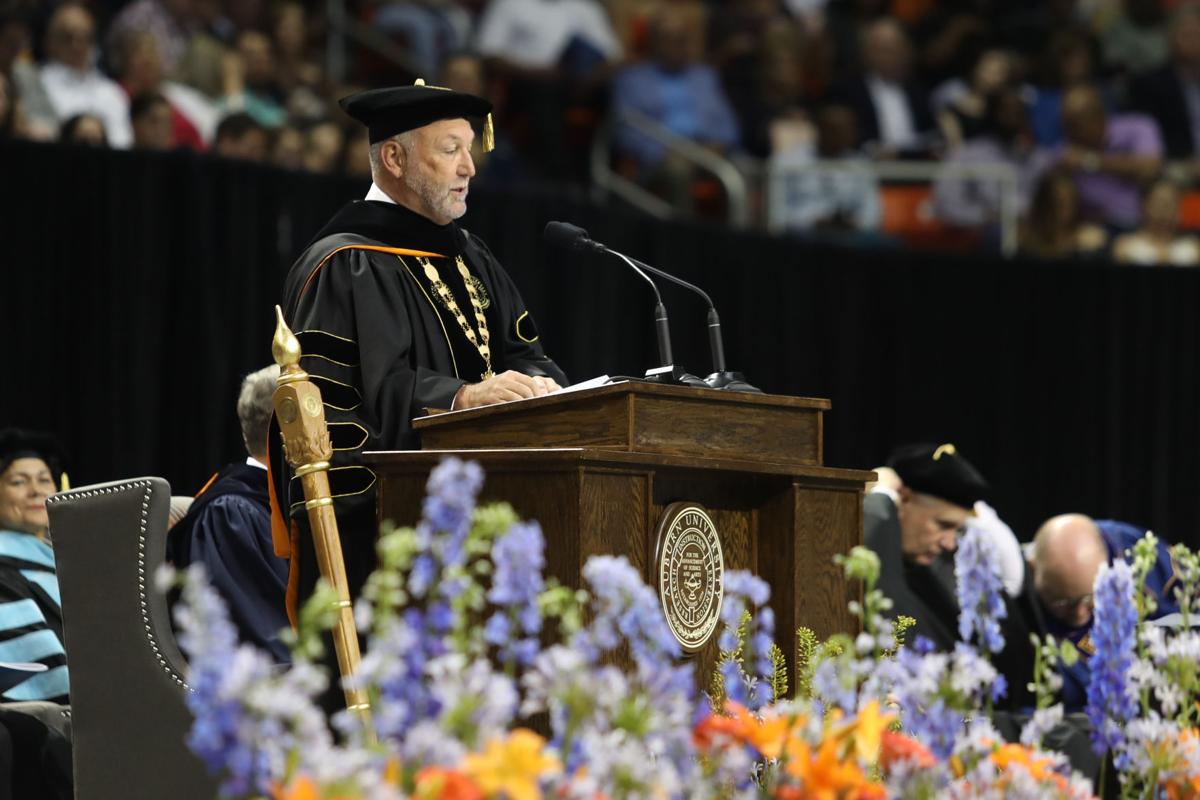 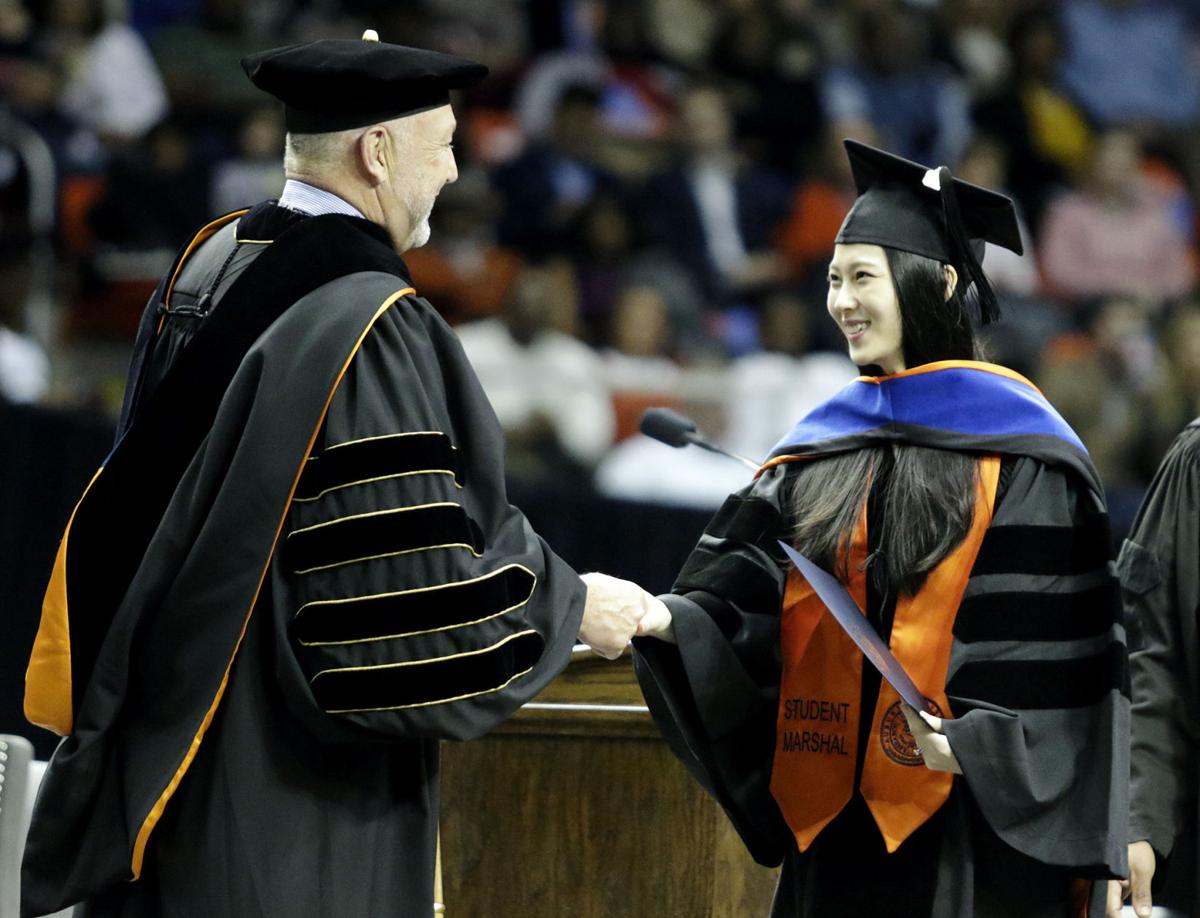 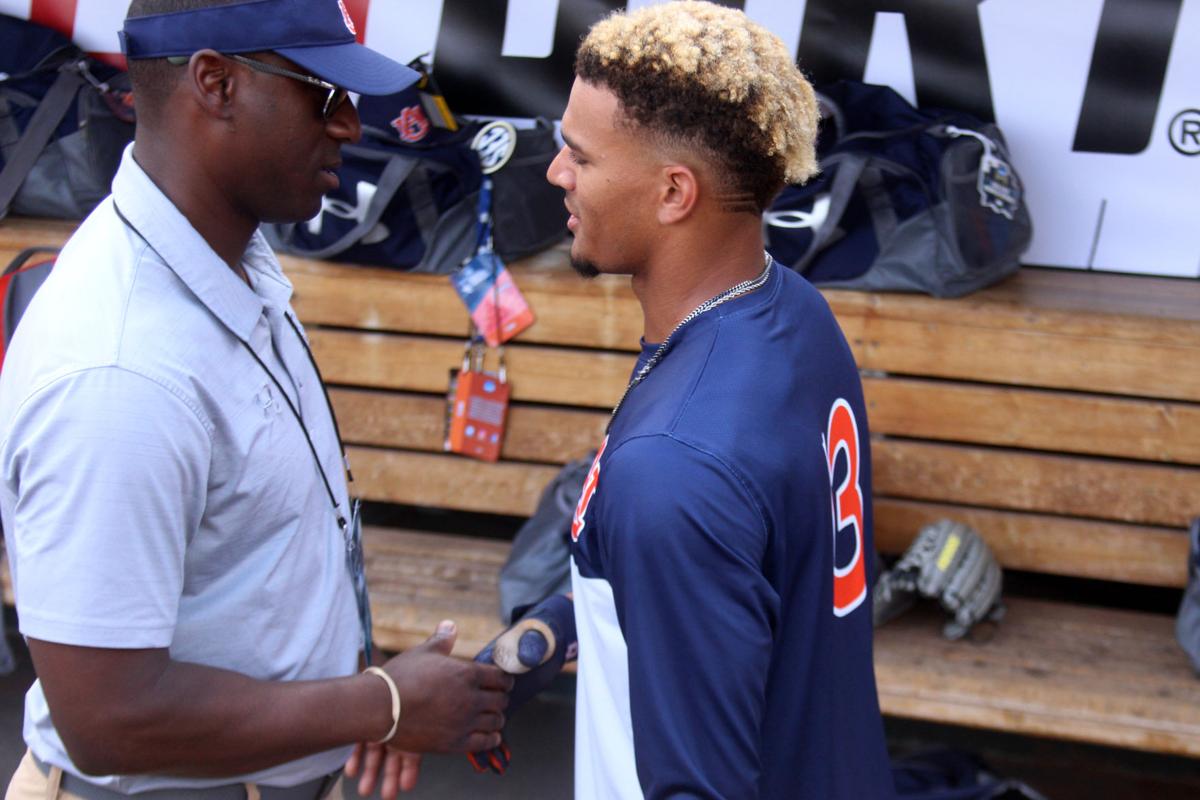 Auburn Director of Athletics Allen Greene, left, and head football coach Gus Malzahn pose before the Rebuilding Together event in Beauregard at Providence Baptist Church in Beauregard on Saturday, April 27.

Former Attorney General Jeff Sessions (left) smiles for a photo with former Auburn University President Steven Leath during a break in the first half of the 2018 Auburn vs. Arkansas game at Jordan-Hare Stadium in Auburn. (O-A News file photo)

Auburn Director of Athletics Allen Greene, left, and head football coach Gus Malzahn pose before the Rebuilding Together event in Beauregard at Providence Baptist Church in Beauregard on Saturday, April 27.

A little more than two years ago when the Opelika-Auburn News broke its weekend story about Steven Leath being tabbed as the search committee’s candidate to become Auburn University’s next president, he was sitting at an Iowa State basketball game in the NCAA tournament.

Then-president of Iowa State, there had been no announcement made yet about him leaving to accept his new role. Auburn’s trustees still had to attend a special-called meeting that following Monday to officially vote to hire Leath.

Much to Leath’s and Auburn’s chagrin, given that Iowa State seemingly was unaware of his plans and that the massive PR machine at Auburn has a mission of controlling its storyline, we purposely published the previously unannounced news based on trusted sources and one very important question:

Could the Auburn University board of trustees, before its Monday morning vote, truly be aware of Leath’s skeletons in the closet that weren’t just hanging, but still walking?

Two years later, Leath and Auburn University have parted ways. But why was Leath hired in the first place?

We in the newsroom did not want to simply break a story back then, although that’s our business. Rather, through only a few hours of investigation, we uncovered a number of concerns that left us puzzled by the school’s pending decision to hire Leath.

Just to be sure the point was made before the board’s Monday vote, our Sunday story was accompanied on the Opinion page by a column from yours truly with the headline: “Is Jetgate II coming to Auburn?”

That commentary included this:

“Perhaps the Auburn University board of trustees will ask some of the same questions on Monday morning that I’m about to ask and decide to deny it has ever seriously considered Steven Leath. Or explain to us why it’s satisfied with answers it already has received from those questions.”

Longtime Auburn folks need little introduction to what Jetgate I was, but as a refresher for the younger or newer crowd, it involved a years-ago secret flight in a behind-the-back ploy to replace former Auburn football coach Tommy Tuberville. The entire episode did not bode well for the university.

The term Jetgate II was a play on words because of Leath’s previous troubles involving an infamous flight of his own.

Leath was mired in a controversy at Iowa State after it was revealed that he was learning how to fly and was building his personal flight credentials using a university aircraft.

There also were questions raised about a high-paying job given to his flight instructor, among other things.

Those were but a few of the red flags that shot up when we started our investigation into Leath’s background, but when those flags started turning into a carpet, our attention instead turned to the Auburn trustees and the question again of: Why Leath?

Surely, we thought, our Sunday story and commentary would do one of two things: either cause the Monday morning decision to hit a pause button, or prompt some sense of public reassurance as to how the now-publicized concerns were satisfactorily addressed.

Leath, after all, did seem to have many fine qualities as an educator and administrator. Primarily, he understood the mission of a land-grant university such as Auburn, in which there must be a certain dedication to agricultural research.

He also seemed to have high hopes for enhancing Auburn’s reputation on the national and international stages for various other types of research. And, to Leath’s credit, there were positive moves made during his brief tenure.

Burgess, an Auburn alum, is considered a rock star in national security and intelligence circles, a qualified source told me. His enhanced association with the university has opened eyes from afar.

Leath also sat in our office after an invite to meet with us and our community editorial advisory board, a diverse group, and talked about his own goals of improving diversity at the university, something many Auburn followers don’t want to think about, but should.

Oh, but there’s that word athletic. And now we get to the heart of the matter.

Surely, by now, every human being on planet Earth knows that any SEC school must hire a president who understands SEC sports.

A good university president is measured by many attributes, hopefully most of them from the academic world, but in the Southeastern Conference athletic alliance, the competition is too fierce and the payout too immeasurable to disregard it as a top point of consideration for any presidential candidate checklist.

Steven Leath may aspire to great things in academic research, and he may know how to fly an airplane, but when it comes to SEC sports, Leath doesn’t know diddly.

Leath rubbed a lot of folks the wrong way with his sometimes blunt and abrasive approach, and with his dogmatic ownership of matters including in sports, various sources have told me. But people, especially in the politics of academia, will say that about most presidents, or something similar.

Not surprising since, speaking of diversity, a university faculty will have viewpoints and expectations that will come from all directions, with many different ideas on how best to run a university. Perfection and popularity never will be easy to find.

Throw athletics into the picture, and you might as well turn loose a porcupine in a nudist colony.

Is Allen Greene a good athletic director? Was he leading, involved or on the distant sidelines of recent decisions such as coach contract negotiations?

He has a tough job. It’s another position sure to have its unfair share of critics, second-guessers and Monday morning quarterbacks.

However, his track record at Buffalo, his previous job, looks pretty darn good, and the talk is that we’ll find out more about him now that Leath is removed from office. About him, and the trustees, of course.

The Auburn University board of trustees is a powerful lot. It should be. Billions of dollars and thousands of influential jobs, not to mention the school’s primary role of providing academic contributions that this world needs, all are governed by this board.

There are board members who bleed orange and blue in their dedication to Auburn.

Among them, someone, or the entire board, obviously thought Leath would be a good president. However, the board made a mistake in not taking the challenge seriously to share more about why it hired Leath.

Questions were raised, but went unanswered.

Transparency in the hiring process was promised, but then denied.

Here we are again

This next go-around, the trustees need to do better.

Better than finding a new president who can score touchdowns and hit home runs or sink three-pointers.

Better than finding a new leader who can inspire and open doors to greatness in research and academia.

'Trending' local/state stories and galleries from the past week

Here's a collection of some popular local/state stories and photo galleries from the past week, in case you missed them:

Jay Gogue is back on campus.