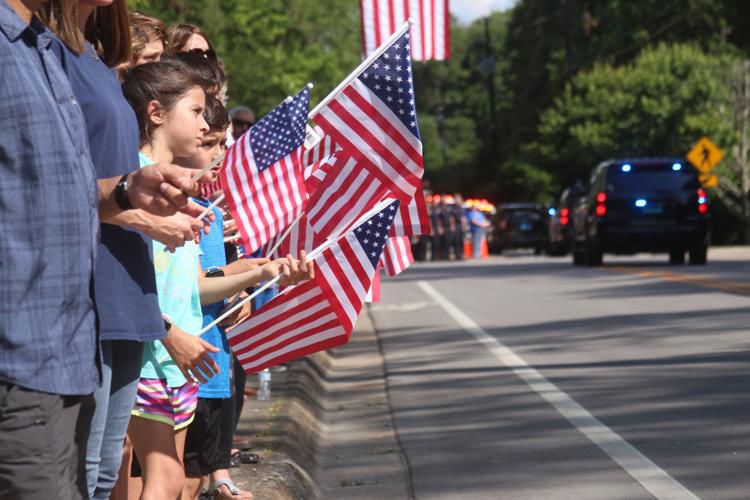 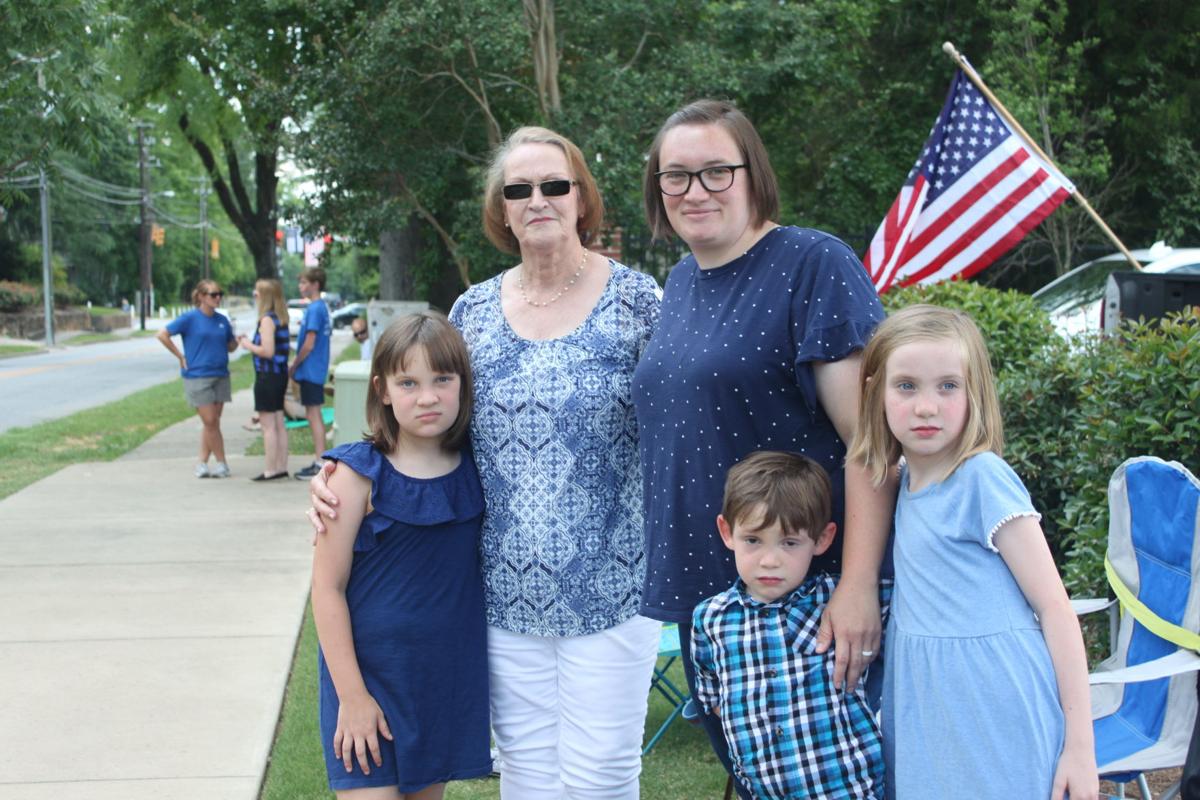 The Keel family: from left, Chloe, Brenda, Maegan, James and Lily, was one of several Auburn families who dressed in blue and lined up along the funeral procession route to honor Auburn police Officer William Buechner. 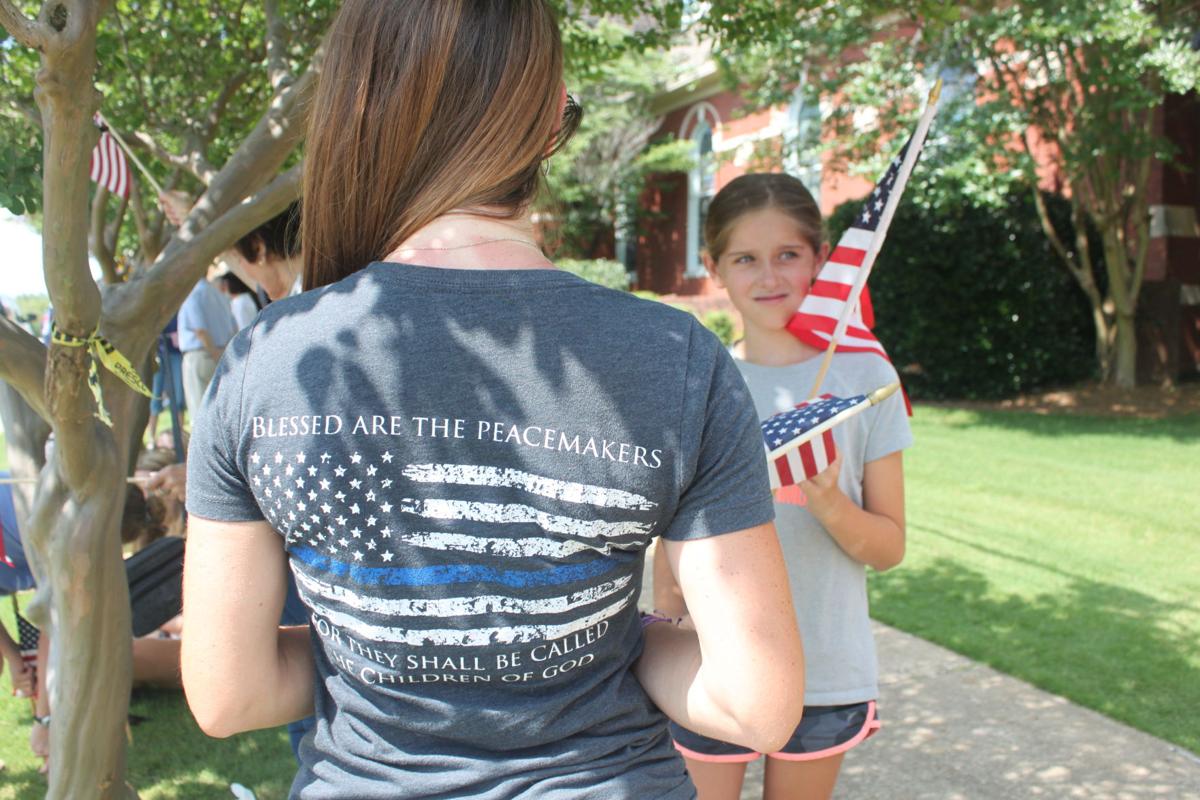 Luann Chamberlin wears a T-shirt honoring law enforcement and her daughter Shelby looks on while they stand along Officer William Buechner's funeral procession route in Auburn on Friday, May 24. 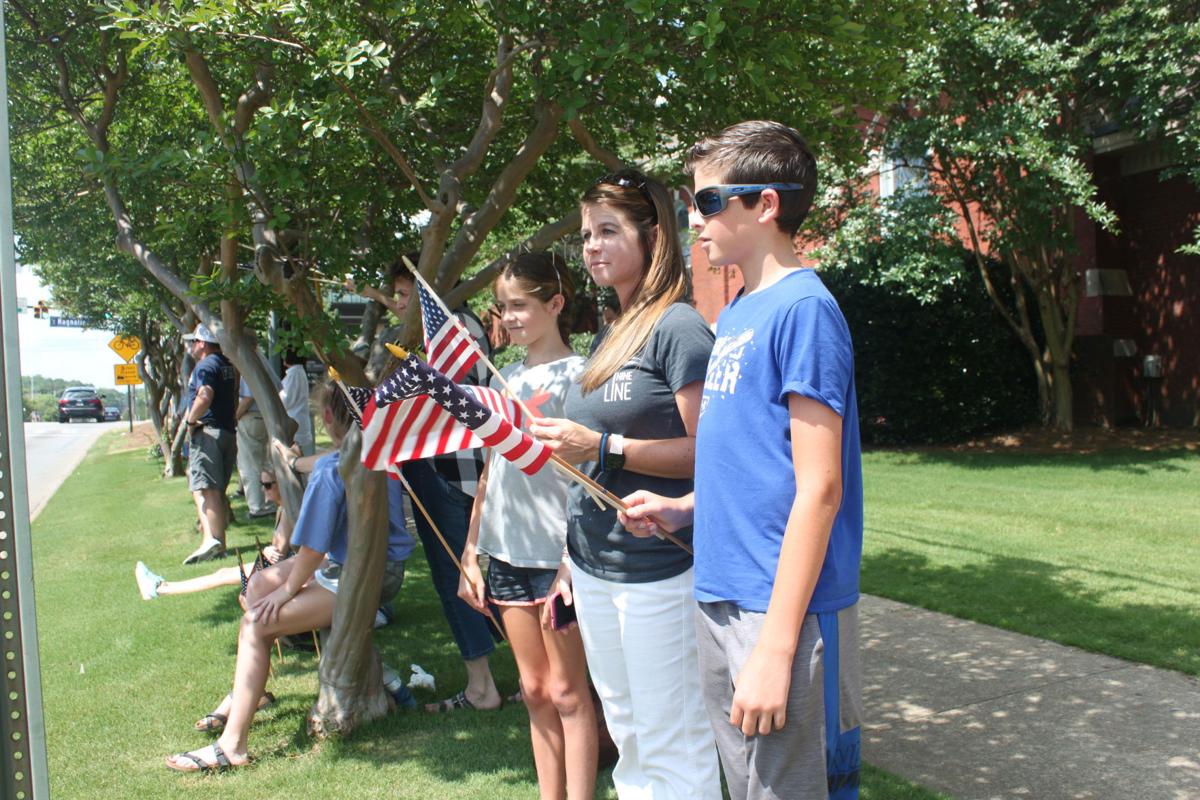 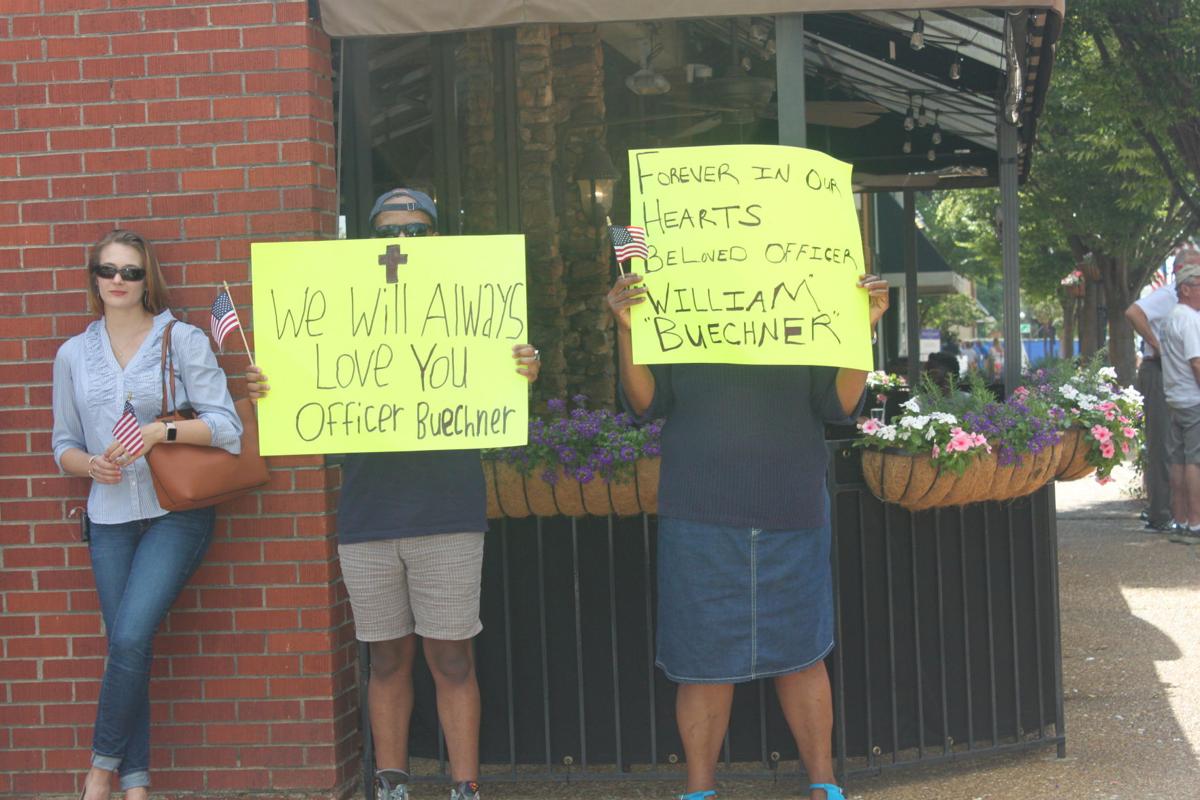 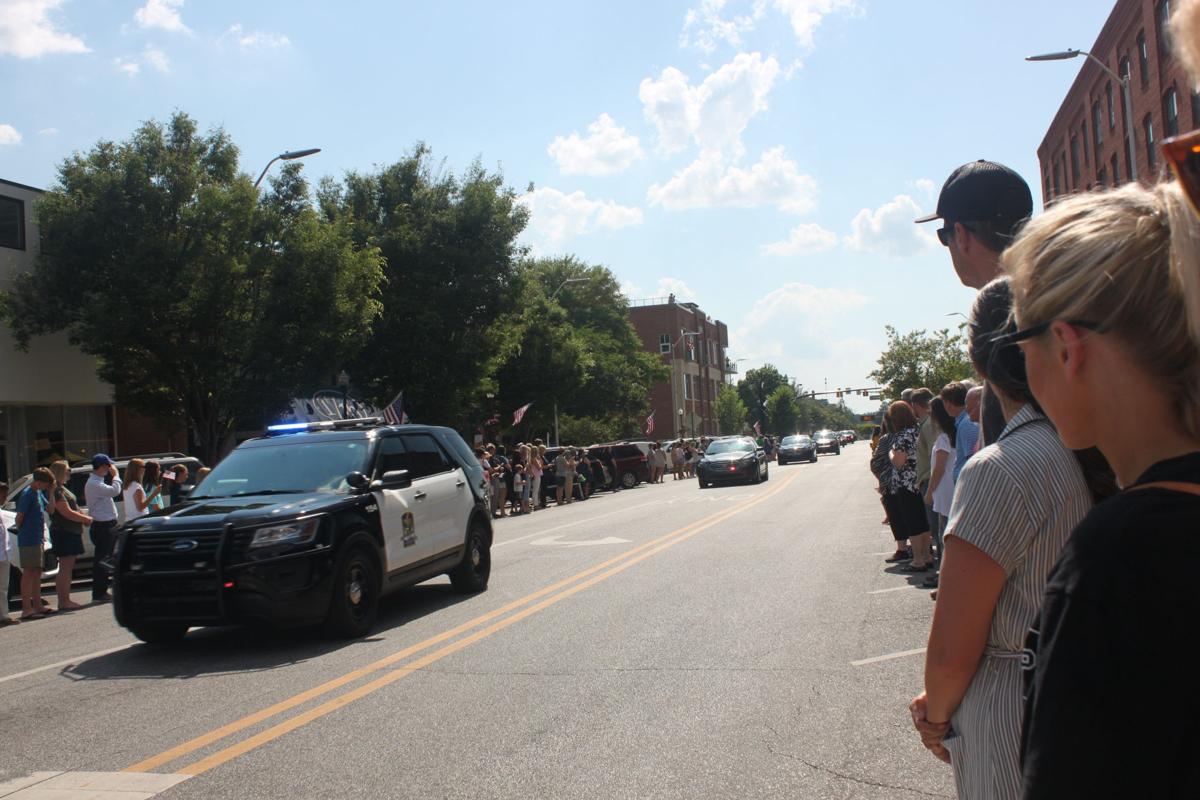 Crowds line both sides of the street along the funeral procession route for Auburn police Officer William Buechner on Friday, May 24.

The Keel family: from left, Chloe, Brenda, Maegan, James and Lily, was one of several Auburn families who dressed in blue and lined up along the funeral procession route to honor Auburn police Officer William Buechner.

Luann Chamberlin wears a T-shirt honoring law enforcement and her daughter Shelby looks on while they stand along Officer William Buechner's funeral procession route in Auburn on Friday, May 24.

Crowds line both sides of the street along the funeral procession route for Auburn police Officer William Buechner on Friday, May 24.

They held up posters with words of thanks, words of sympathy, words of encouragement.

They held their hands over their hearts; they bowed their heads and prayed.

They stopped work, closed their shop doors, and stood with the patience of Job in the sweltering heat.

They shut their notebooks, their iPads, their laptops and left the classrooms to stand on the sidewalks together.

They shared shade trees, they shared the heat of standing in the sunlight.

What they did not do, however, was utter a sound.

Their silence was the cry heard loudest.

Buechner died the previous Sunday night, May 19, when he and three other Auburn officers responded to a domestic violence call, went to the front door from where the need for help originated, and as the door cracked open, gunfire rained down upon them.

Will Buechner had little chance. Two other officers were shot and injured. And a community soon became galvanized in a mighty wave of heartfelt emotions.

Auburn University honored Buechner, a proud alumnus who more than once wore his uniform while serving in protection of the school’s campus and activities, by quickly agreeing to Auburn Mayor Ron Anders’ request to allow the funeral to be conducted inside Auburn Arena.

It is the only funeral ever conducted in the arena.

Perhaps as many as 3,000 filled the seats inside; hundreds of them in first-responder uniform as peace officers, firefighters, paramedics and others from throughout the region attended to pay their respects.

Officers from Mississippi were there.

Officers from Georgia were there.

The New York Yankees sent a beautiful stand of flowers.

There was a clear signal sent to the rest of the world from this attendance, itself, that a first-responder brother willing to risk his life and make personal sacrifices for public service is never alone.

That message seemed reassuring to those many others in uniform, and to the families that support them.

But then the pastors conducting the funeral spoke, and to these fine people in uniform, and to the rest of the world, they carried an even stronger message.

‘But to dwell with Him’

You cannot do this job alone, he told the men and women wearing patches and shields.

You can’t go through this kind of grief alone, said the Rev. George Mathison.

And no one can cheat the common denominator every single one of us share: death.

But, we can battle the fear and sorrow of death if we accept the fact that God is with us. As David shares in the 23rd Psalm, “I shall not fear…for thou art with me.”

He is a God of love, Mathison reminded everyone in the audience:

“If God had a refrigerator, your picture would be on it.”

Looking at the dozens of Auburn police officers filling the front rows, “you are strong,” Mathison told them, “but you’re not strong enough to walk through this valley alone…

“He did not make us to walk alone…but to dwell with Him.”

Others spoke and shared words of meaningful praise and encouragement.

“Blessed are the peacemakers, for they are the children of God,” Mayor Anders quoted.

Police Chief Paul Register said of officer Buechner, “his integrity was never questioned, not once.”

Register acknowledged with appreciation the hundreds of officers and responders who came from other cities and communities, some of them hundreds of miles.

He described Buechner as an officer who could and would respond to any type call, and “he could talk with anyone,” Register said.

The officer loved his job, every part of it, the chief said, adding that during Buechner’s 13 years on the Auburn police force, “he responded to over 34,000 calls.”

Pastor Brandon Isbell encouraged the audience to live a life of happiness such as that he saw in officer Buechner.

“Make joy your legacy,” he said, and in preparing for the day death on Earth comes, “don’t miss Heaven.”

Officer Bradley Henderson sang his friend’s praises, citing his bravery and willingness to take even the toughest calls to action, and Henderson reminded the community that others on the force were also dedicated to its protection.

Live, be happy, he said, “because we have the watch.”

The long parade of cars, trucks, motorcycles and fire trucks with flashing lights formed a miles-long funeral procession that filled Magnolia Avenue up along the side of the Auburn campus, into the heart of Auburn at Toomer’s Corner, before turning toward the cemetery.

Hundreds lined the streets, and Toomer’s Corner, where thousands and thousands of fans for decades have celebrated Auburn victories in cheer and joy – this time was a crowd scene of silence.

The quiet was contagious.

Even the children hushed.

It was eerie yet solemn to see so many gathered, at a place known so well for its loud cheer, to be so humbled in silent respect.

They held up hand-written signs of support.

They held hands over their hearts as they stood speechless.