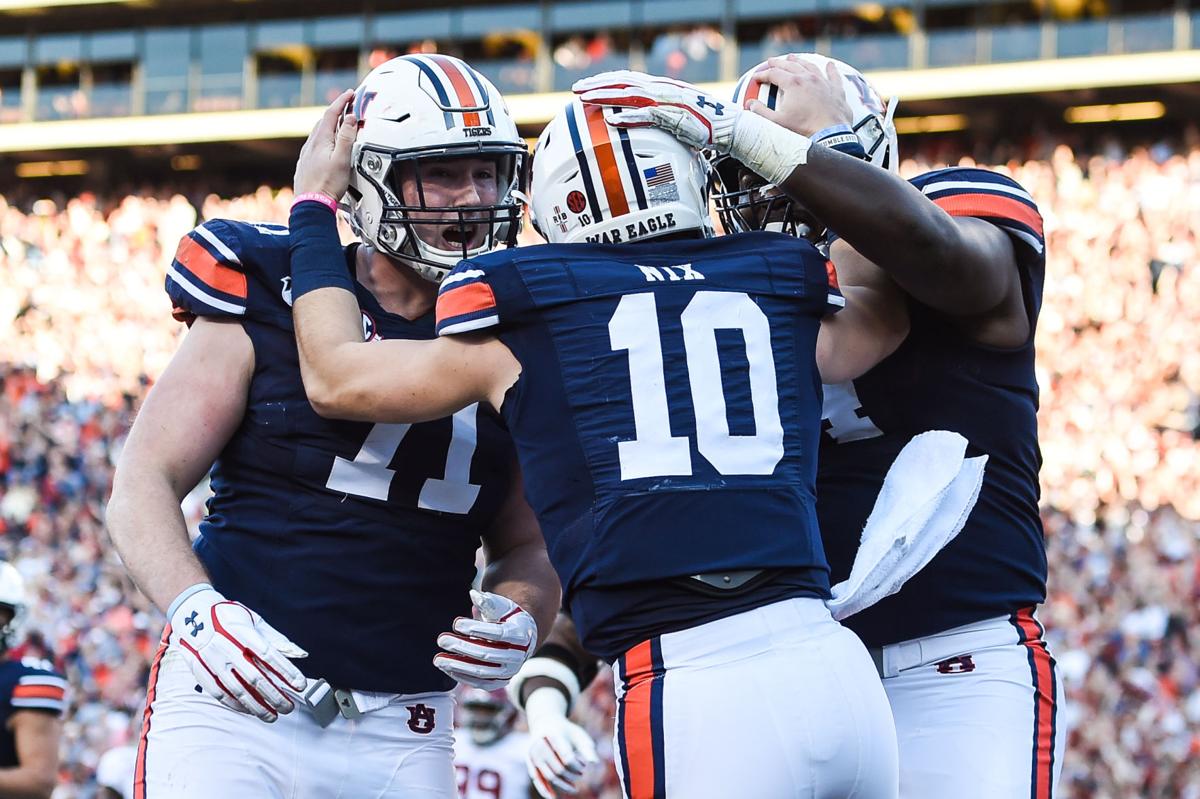 Bo Nix (10) of Auburn celebrates with teammates after his TD during the Auburn vs. Alabama Iron Bowl at Jordan-Hare Stadium on Nov. 30, 2019.

TAMPA, FLA. — From the land of ice and snow, Auburn sees giants coming its way, from first-time-ever opponent Minnesota.

It sounds like a fable, this 10-win team from a faraway land that Auburn’s never seen before, now coming to face the Tigers in today’s Outback Bowl. But that’s almost how Auburn talks about this Minnesota team. Derrick Brown shook his head under a palm tree at practice this week when he was asked about Minnesota’s 400-pound offensive tackle, and the other massive men around him. It’s unheard of, he said. Meanwhile, two 1,000-yard receivers have had Jeremiah Dinson’s attention all week. Gus Malzahn has gushed over the job his young counterpart coach P.J. Fleck has done up in Minneapolis.

Auburn sees a big challenge ahead in these Golden Gophers from seemingly a world away.

But, as always, Auburn awaits this next beast with ready arms — once again taking the great challenge as great opportunity.

“We feel like we’re playing one of the best teams in all of college football,” Malzahn said.

Auburn and Minnesota kick off at noon in Raymond-James Stadium. The game is set to be televised on ESPN.

In so many ways, it’s a turf war, between an Auburn team bent on getting back in the national championship talk, and an up-and-coming program trying to break the ceiling set overhead by powers just like Auburn.

On the field, there figures to be a chess match between Fleck, the fiery young coaching star at Minnesota, and Malzahn’s cool, calculated winning system. Auburn’s superstar on defense, Brown, will be put up against maybe the biggest line he’s faced this season. That tackle he’s so impressed by is Daniel Faalele, listed at 6-foot-9 and 400 pounds.

Those standout receivers for Minnesota are Tyler Johnson and Rashod Bateman, who have hit four digits in receiving yards this season — catching bombs from quarterback Tanner Morgan.

On defense, Minnesota has the 11th best passing defense in passing yards per game allowed, giving up only 184.9 per game — and hauling in the nation’s 16th-best tally in season interceptions with 14.

The Gophers surged into the top 10 this season with a 9-0 start, culminating with a 31-26 win over then-top-10 Penn State that turned heads all across the country. Losses to Iowa and Wisconsin in November kept Minnesota out of the College Football Playoff, but the Gophers have already reached the 10-win plateau Auburn is reaching for, and it’s easy to see why Malzahn considers Minnesota one of the best teams around.

Auburn, of course, has played plenty of strong teams this season, but this one, Malzahn said, is a little bit different from any other team Auburn’s played so far.

When he had his assistant coaches scout ahead, and asked them who Minnesota might be similar to, he said he didn’t really get an answer. And that’s probably shaped Auburn’s entire bowl trip from that point on — the team knowing it’s coming to Tampa to face a team a bit unlike anything Auburn’s seen before.

“That’s what I always ask our coaches. They get to watching a little bit quicker because we’re doing recruiting and everything. ‘Hey, who do they remind you of?’ And really, they’re pretty unique, a little bit different than what we’re used to seeing,” Malzahn explained this week. “But when you look at them defensively, what they do, they know their answers. They’re really good. They play extremely hard. Offensively they get the ball to their best players and they figure out ways to get them in one-on-one situations

Here comes Auburn’s chance to write some history. The Auburn and Minnesota football programs have never met. Auburn wants the record books to say it won the first game.

Maybe it’ll play out like one of those storybooks, when the Tigers and Gophers get together from worlds apart.

Either way, Auburn’s bent on writing history as the victors.

‘Out with a bang’: Auburn’s veteran defensive backs embrace challenge against Minnesota receivers

TAMPA, FLA. — Bo Nix carries his focus with him.

TAMPA, FLA. — Auburn’s Jack Driscoll put it best. There’s plenty for the football team to do…

‘Locked in’: Auburn focuses on Minnesota with practices in Tampa

TAMPA, FLA. — Minnesota arrived down one, missing its offensive coordinator.