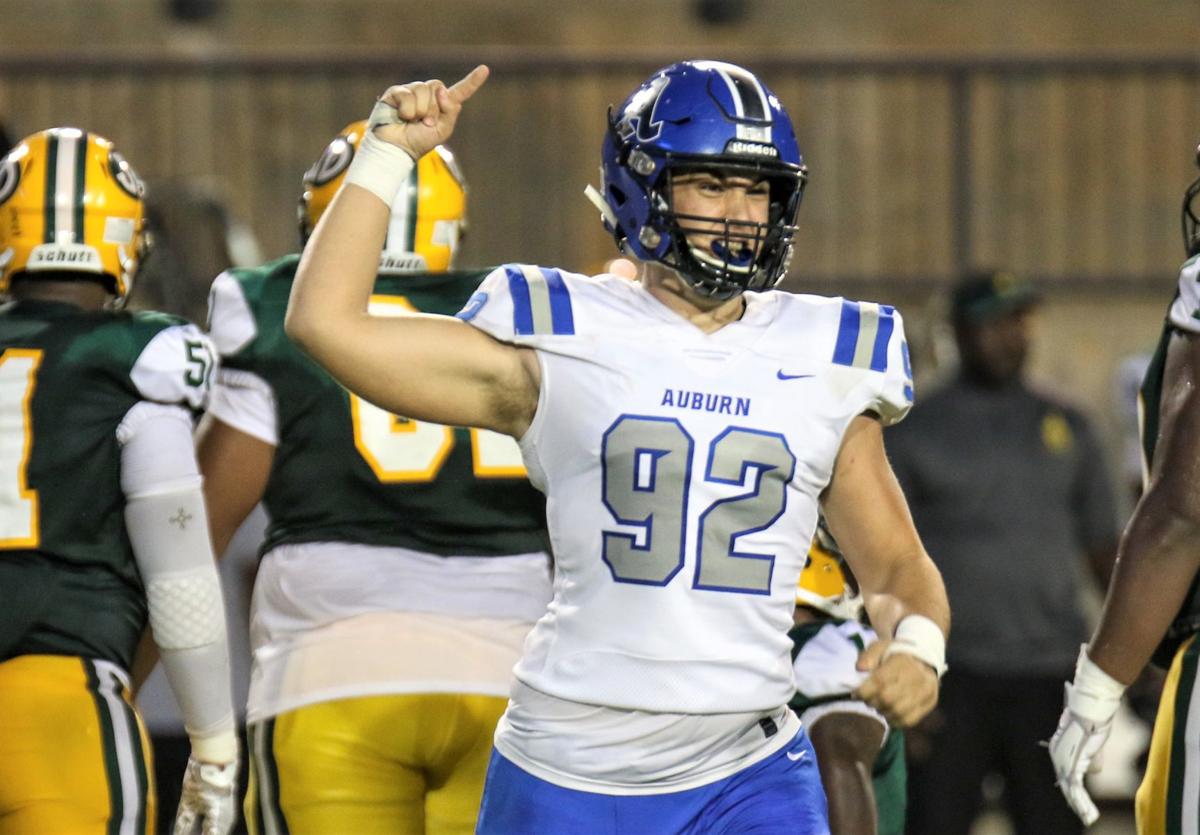 Auburn High's Kincaid Rickerson (92) celebrates a turnover during the Auburn High vs. Jeff Davis game at the Cramton Bowl in Montgomery on Sept. 19. 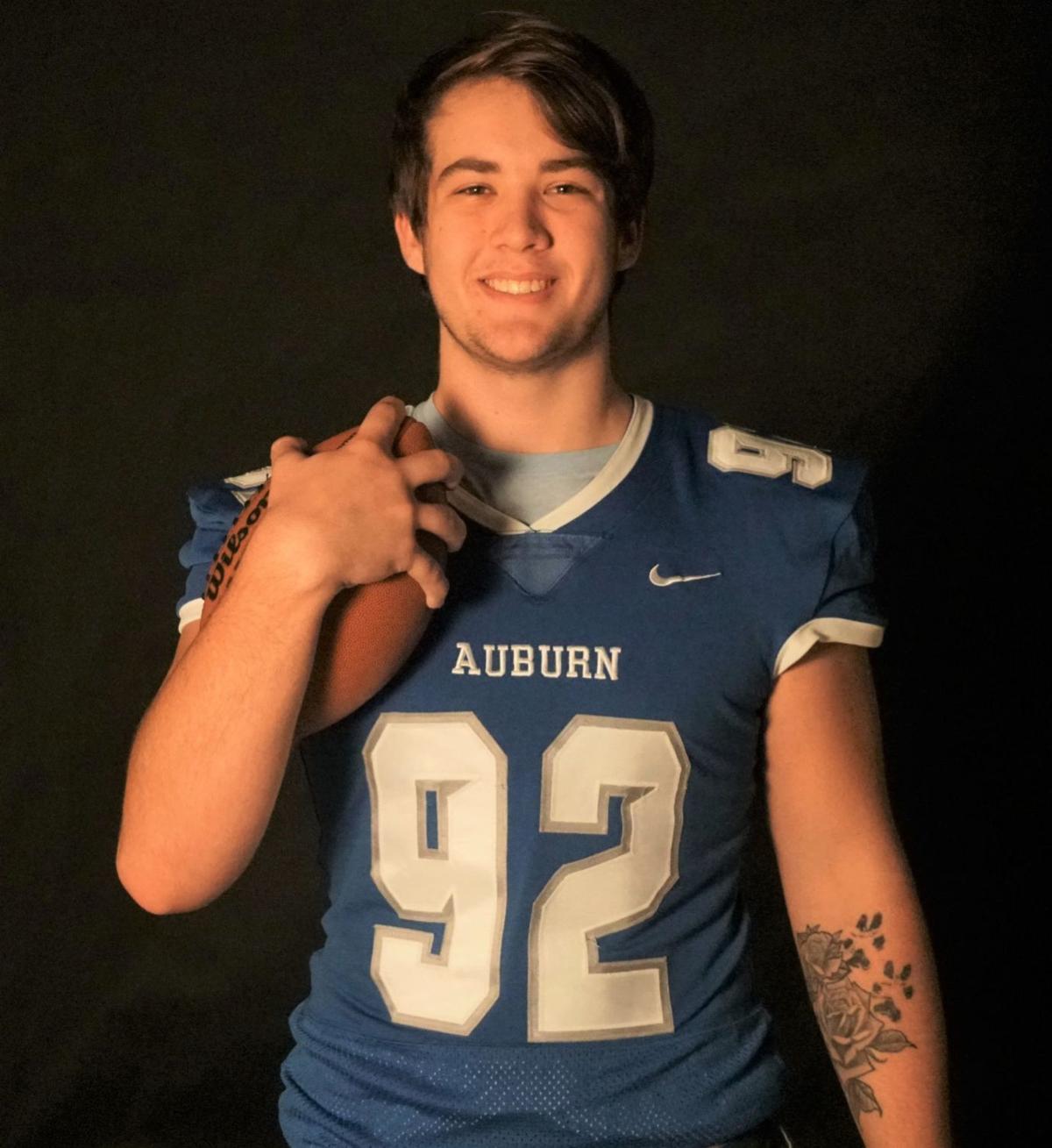 Auburn High's Kincaid Rickerson excelled in his senior year, and his play on the defensive line earned him All-Area first team and All-State honorable mention nods.

Auburn High's Kincaid Rickerson (92) celebrates a turnover during the Auburn High vs. Jeff Davis game at the Cramton Bowl in Montgomery on Sept. 19.

Auburn High's Kincaid Rickerson excelled in his senior year, and his play on the defensive line earned him All-Area first team and All-State honorable mention nods.

Like many senior student-athletes this year, Auburn High’s Kincaid Rickerson was tasked with deciding on a college during a global pandemic. Despite the challenge, Rickerson finally settled on which school was right for him.

Rickerson committed to Concord University in Athens, West Virginia, on Saturday. The commitment ended a long and at times trying process for Rickerson after finishing his football career at Auburn last November.

“I really enjoyed the coaches and how they talked and treated me. It didn’t feel like I’m going there to just go there; I’m going there to make a difference in the program and help improve my new team as much as I can,” Rickerson said. “It’s a massive weight off my shoulders and was a moment of just pure excitement and happiness. I had the feeling of knowing this is my new home and family.”

From Tiger to Mountain Lion

Rickerson was tasked with choosing a school when traveling for campus visits wasn’t possible, which meant he would not be able to meet any team’s coaches or see the campus in person. He said phone calls were the most effective means to whittle down his options, and through that came plans to see the school in person as soon as he can.

Rickerson will join the Mountain Lions’ program after a strong senior year at Auburn. He contributed at tight end and on the defensive line for the Tigers in 2019, and his efforts were important in helping the team reach the state semifinals for the first time since 2013.

Defensively, Rickerson racked up 35 solo tackles, 18 tackles for loss and a team-high nine sacks on a Tigers’ defense that only gave up 15.3 points per game. His play earned him All-Area first team and All-State honorable mention selections.

“I think he’s a versatile football player,” Auburn High head coach Adam Winegarden said. “Every great defense starts with your front, and he was definitely a big player on our defensive front. He did a heck of a job. He was a guy that obviously could play different positions on the front. He has a really high motor and a great passion and intensity for the game, and that’s what it takes to be good there. It takes a relentless mindset, and he definitely has that.

“They’re going to get a kid who’s a really great teammate, who’s going to be very coachable and will want to improve and play his part in the success of the team.”

Rickerson said his senior season was one of his favorites because he and his teammates left everything they had on the field each Friday night, and it led to the team’s strong year. He said his performance in Auburn’s 44-0 win over Enterprise particularly stuck out to him, especially just how much fun he had in the victory.

In Rickerson’s opinion, Auburn provided him everything he needed to go to Concord and succeed.

“Auburn High definitely prepared me for the next step in life. All my teachers helped me get to the point I needed academically, especially Mrs. (Jacque) Middleton. She helped me for five years of school,” Rickerson said. “When it comes to athletically, I can’t be thankful enough for having a lot of good coaches, especially the best coach, coach (Tony) Ford. He helped me get to where I’m physically and then also helped me learn the game and become a better man.”

Rickerson said he’s most looking forward to playing tight end at Concord, making plays at the next level and helping his new team as much as possible. To call Rickerson’s path to the team a difficult one would be an understatement given everything going on, but now he’s locked in and just waiting for the chance to join his new team.

“I’m extremely excited to get up to Concord and just give it my all. I can’t wait to be playing on Saturdays,” Rickerson said. “I’m excited to be with them, to practice and to get fully ready for that first game.”