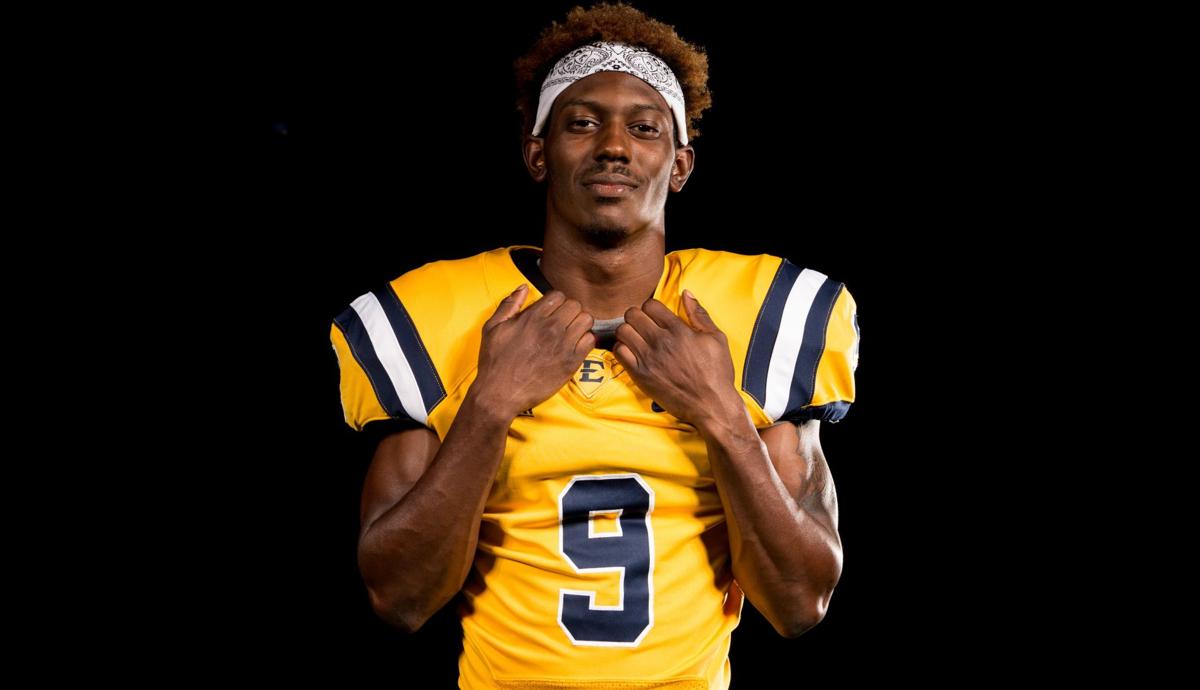 After a standout high school career at Central-Phenix City, Karon Delince has been a two-sport star at ETSU.

Editor’s note: This is the latest in a series of stories catching up with former high school football stars from the Opelika-Auburn area as they prepare for another season at the collegiate level. Today’s story features Central-Phenix City alum Karon Delince.

Karon Delince has never backed down from a challenge going back to his days as a two-sport star at Central-Phenix City. Delince has continued to balance his love of football and track at ETSU, and he’s eager to go out with a bang in 2020.

Delince is coming off a strong 2019 season in which the defensive back started the year as a preseason All-SoCon second teamer and ended the year with five or more tackles in five of the 11 games he played for the Buccaneers. He was unrelenting during track season as well, earning first place in the long jump and third in the 100-meter dash at the SoCon Outdoor Championships.

For Delince, 2019 was about growing his game in preparation for a senior year that he hopes features his best work yet.

“Starting off it was kind of fun. I had to learn the routes, so I was basically following in the footsteps of my older teammates — my brothers as I would say because of how close I became to them,” Delince said. “After a while, I started getting the hang of it and started getting the gist of everything just like I used to in high school. It came to be very much a learning experience but at the same time pretty fun.

“To be honest, I just wanted to help my team more and be an impact player. I wanted to let them know that you don't have to worry about this whole side over here because I'm going to shut it down just so y'all can do y'all's work.”

Delince wanted to take more responsibility in his junior year, and to do so he worked extremely hard before the season. The ETSU coaches called for Delince to play more press coverage, so Delince focused on improving his aggressiveness in man-to-man defenses and also worked to improve on his track-star speed.

Those efforts quickly paid dividends for the Buccaneers. Delince felt his favorite moment came against Chattanooga, a game in which he had six tackles in ETSU’s 16-13 loss to the Mocs. For Delince, the team’s effort was a crucial one in a season that had begun to go sideways as he and his teammates did everything they could to keep the ship afloat.

“We went through it as a family united. We had a lot of fight on the field and off the field with the coaches, and we all reunited right back because we all knew it was a part of the game,” Delince said. “It was knowing that you really have got somebody there that has your back. Even though you might lose control, they'll bring you right back and help you come back to reality with the things that really matter.”

Delince continued playing hard down the stretch of the season as the Buccaneers endured seven losses in their final eight games. His finest moment was arguably in ETSU’s four-point loss to the Citadel, as he delivered a season-high seven tackles for his squad.

Delince wasted little time in transitioning back to the track team. As far as that challenge goes, he explained that maintaining weight when jumping back and forth between the sports is the most difficult.

“That's the biggest factor right now. You've got to be the right size to run, and you've got to know how to run with your size. In football, you need your size to take on tackles, impact plays, everything. It's a brutal sport. It's really keeping your weight,” Delince said. “I've got a high metabolism, so it's really not easy to do for me. I've got food back at the house, so sometimes I'll get a little bit.

“(The coaches will) give me some stuff so I can put some weight on, keep me filled up and keep drinking my muscle milk. The coaches really do look out for you when it comes to that point.”

Entering his senior year, Delince is eager to get even better at diagnosing plays and taking his technique to the next level. He has big aspirations for 2020, saying he wants to be an All-American and adding that he thinks this year’s team has the potential to win it all.

Delince’s aim is to also add more interceptions in his senior season. As far as he is concerned, there’s no feeling quite like coming up with a pick.

“When you catch an interception, basically it's like a rush of energy just coming outside. There's so much emotion in that one catch,” Delince said. “The defense doesn't get their hands on the ball that often, so if you actually do catch that ball, you just know that can change the game. At the end of the day, it takes a team to work, but it only takes one person to catch the ball. Right there, you can have your own little pride as in, 'I just took another step for the team.'”

Delince jumped the last question like he would a receiver’s route, saying the season getting here isn’t his focus; it’s reuniting with his team for practice that is the biggest draw. Together with his teammates, Delince is eager to show everyone that the Buccaneers are a true contender in the FCS.

“I'd rather just go and see my coaches, talk with them, play with my own teammates and then practice hard. I love seeing my guys going to work, flying around, practicing with smiles on their faces and getting better,” Delince said. “When we execute on the field in a game, it's like one of the best feelings ever because everything that we prepared for went into the work and we succeeded.”