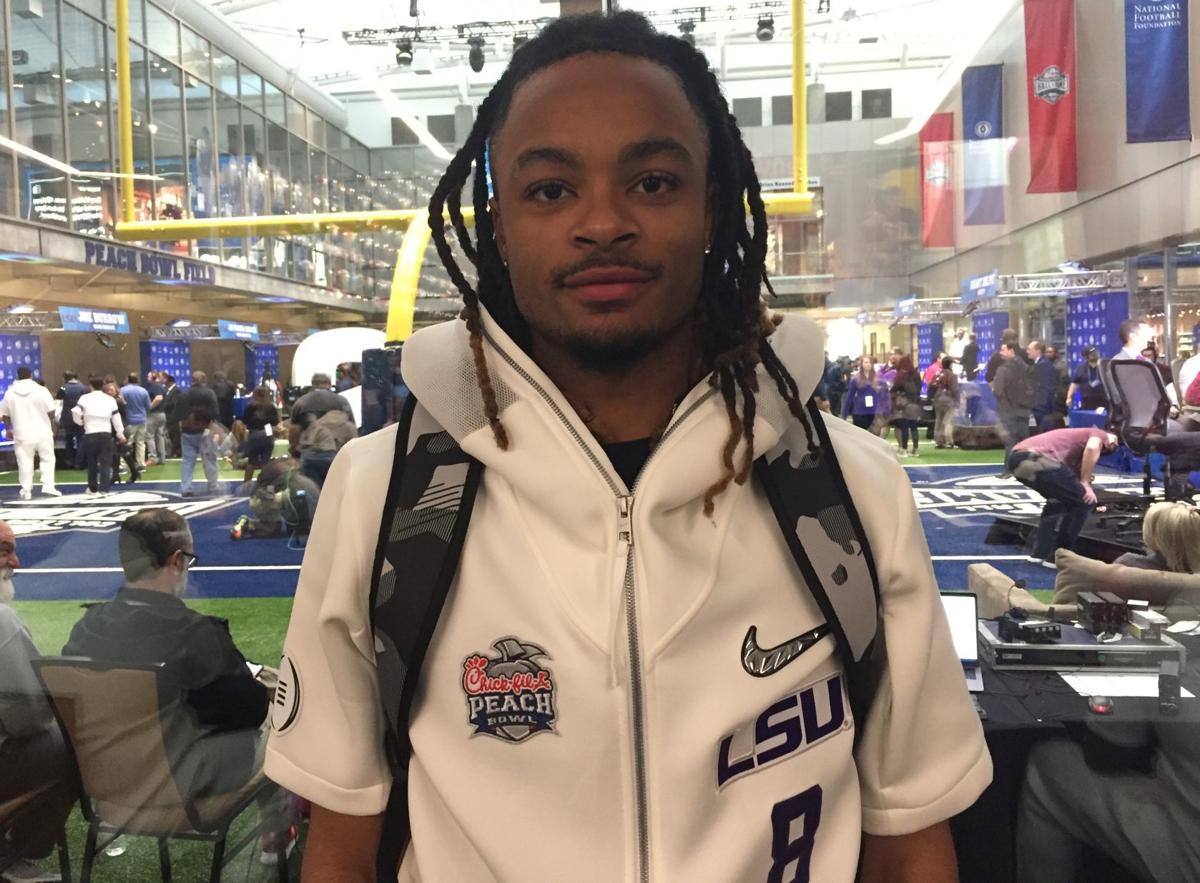 LSU true freshman quarterback Peter Parrish poses during a media session at the College Football Hall of Fame in Atlanta on Thursday. 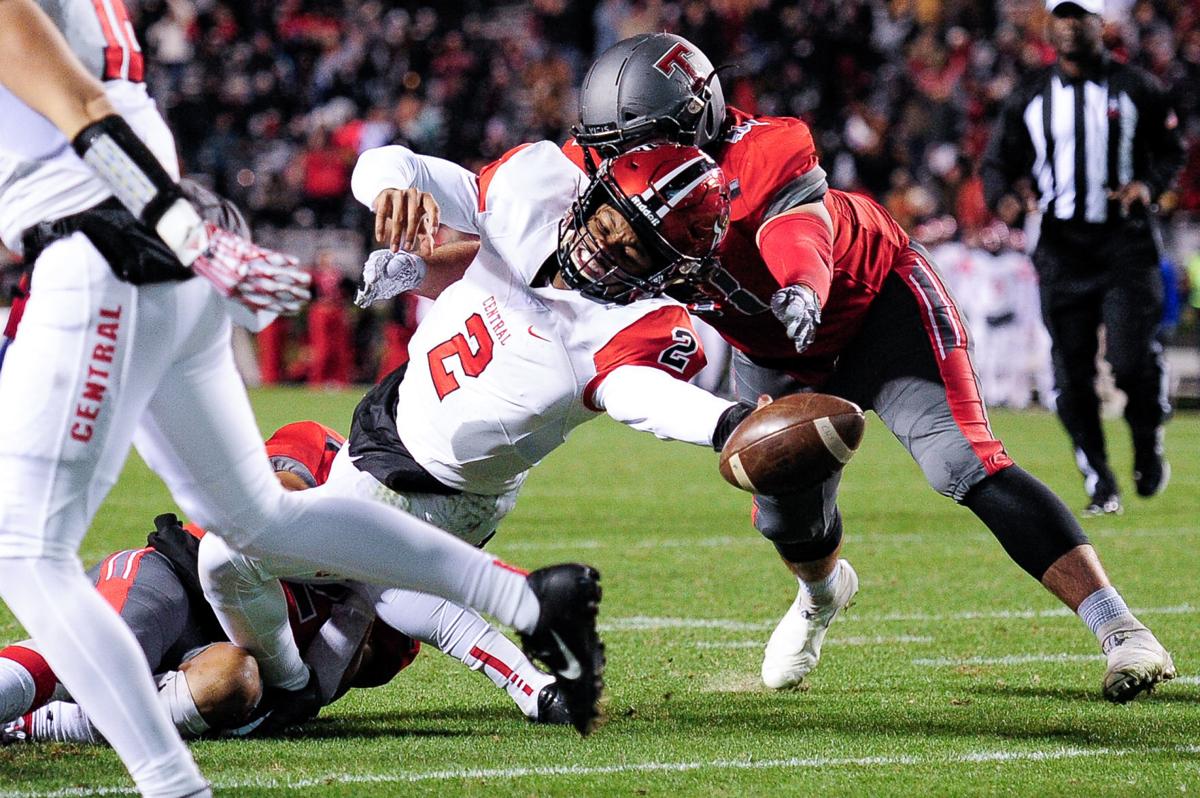 Central-Phenix City quarterback Peter Parrish (2) stretches the ball to the goal line for a touchdown in the first half in the Red Devils' Class 7A title game against Thompson on Dec. 5, 2018.

LSU true freshman quarterback Peter Parrish poses during a media session at the College Football Hall of Fame in Atlanta on Thursday.

Central-Phenix City quarterback Peter Parrish (2) stretches the ball to the goal line for a touchdown in the first half in the Red Devils' Class 7A title game against Thompson on Dec. 5, 2018.

ATLANTA — Going back to his days at Central-Phenix City, Peter Parrish is used to being the one making plays with the football in his hands. Although that hasn’t been the case this season at LSU, it hasn’t stopped Parrish from embracing the moment.

Parrish has yet to record any game stats with the Tigers, but that hasn’t stopped the former Red Devils star from making the most of LSU’s run up to its College Football Playoff semifinal game against Oklahoma on Saturday. The true freshman has embraced the challenge of being an SEC player, and his work so far has him set up well for the 2020 season and beyond.

“It’s been a ride. It’s been a long journey. I’ve gotten to learn things, learn new experiences, things like that. It’s been a great experience so far for sure,” Parrish said. “(It’s been about) learning how to grow up, you know what I’m saying? College is a lot different than high school. You’ve got to carry stuff differently. It’s just learning how to become a man. That’s the main thing I’ve learned from here.

Parrish came to LSU as a four-star recruit and fresh off a state championship with Central, but he arrived in Baton Rouge with the understanding he would likely be redshirted. Parrish has not only benefited from learning what it takes to play at the next level, but he’s gotten a chance to watch a Heisman Trophy-winning quarterback up close.

Parrish credited Joe Burrow for showing him how to stay calm in big-time situations, which Burrow has faced throughout LSU’s 13-win season thus far. Burrow acknowledged that he’s seen improvement in Parrish since Parrish arrived, and he pointed to the spring as being crucial for Parrish’s growth.

LSU recruiting coordinator Tommie Robinson, who recruited Parrish, also pointed to the upcoming spring as being an important time for the quarterback.

“Peter was solid. He was headed to other schools in the SEC, and we had an opportunity to recruit him. He’s a good kid and won the state championship with a team that went undefeated,” Robinson said. “He’s done a good job. He’s a young kid who works. We’ll see what opportunities lie ahead for him right now. We’re looking forward to seeing the competition this spring at the quarterback position as Joe departs.”

LSU head coach Ed Orgeron offered his own assessment of Parrish’s first season and added that the Tigers’ offense might look different in 2020 if in fact Parrish is Burrow’s replacement.

“Peter’s done a great job. We liked Peter in camp,” Orgeron said. “He came back, and obviously he hasn’t had a lot of snaps and stuff like that, but this is a totally different offense. If Peter would be playing as our quarterback, we would have more quarterback runs for him to fit his skillset. Although he can throw the football, he’s not a pure drop-back passer.”

Parrish already has goals set for this offseason, which include learning as much about the game as he can, constantly watching film and getting bigger, faster and stronger before his redshirt freshman season. Until then, Parrish will continue to do whatever is asked of him as LSU eyes its first national championship since 2007.

Parrish took part in the celebration after LSU defeated Georgia in the SEC Championship Game, and he eventually found Robinson — who is also a Central alum — during the festivities. The two took a moment to consider how far they’ve come while also looking ahead at the challenges that still lie ahead.

“I told him after we won the SEC championship, ‘We’re a long way from Phenix City.’ He kind of laughed. He was like, ‘You’re right, you’re right,’” Parrish said. “Knowing where we came from and what we’re doing now, it’s a huge leap. We’re going to keep on rolling on and go to the national championship.”

When the LSU Tigers take the field against Oklahoma in the College Football Playoff semifinals this afternoon, the phone in Willie Pearl Robin…