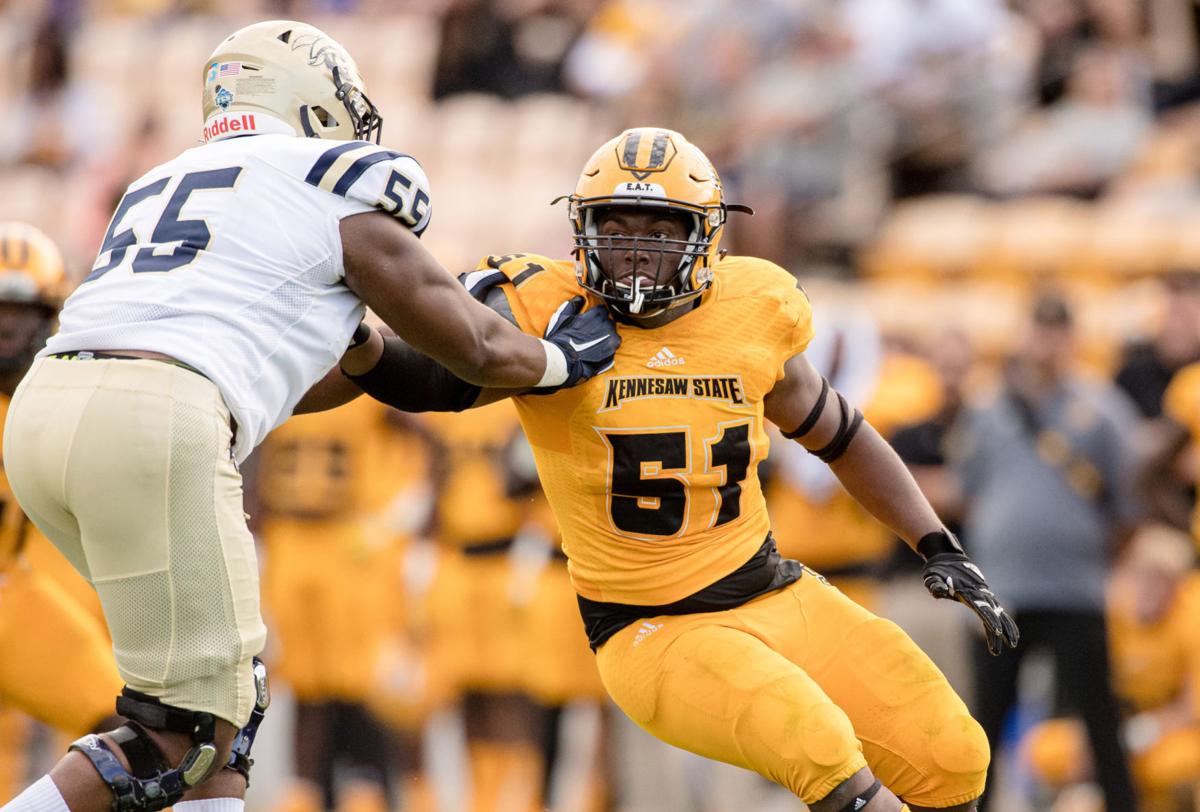 Kennesaw State defensive lineman Kelcy Allen (51) faces off with Charleston Southern's Preston Nichols (55) during the Owls' home game against the Buccaneers on Oct. 12. 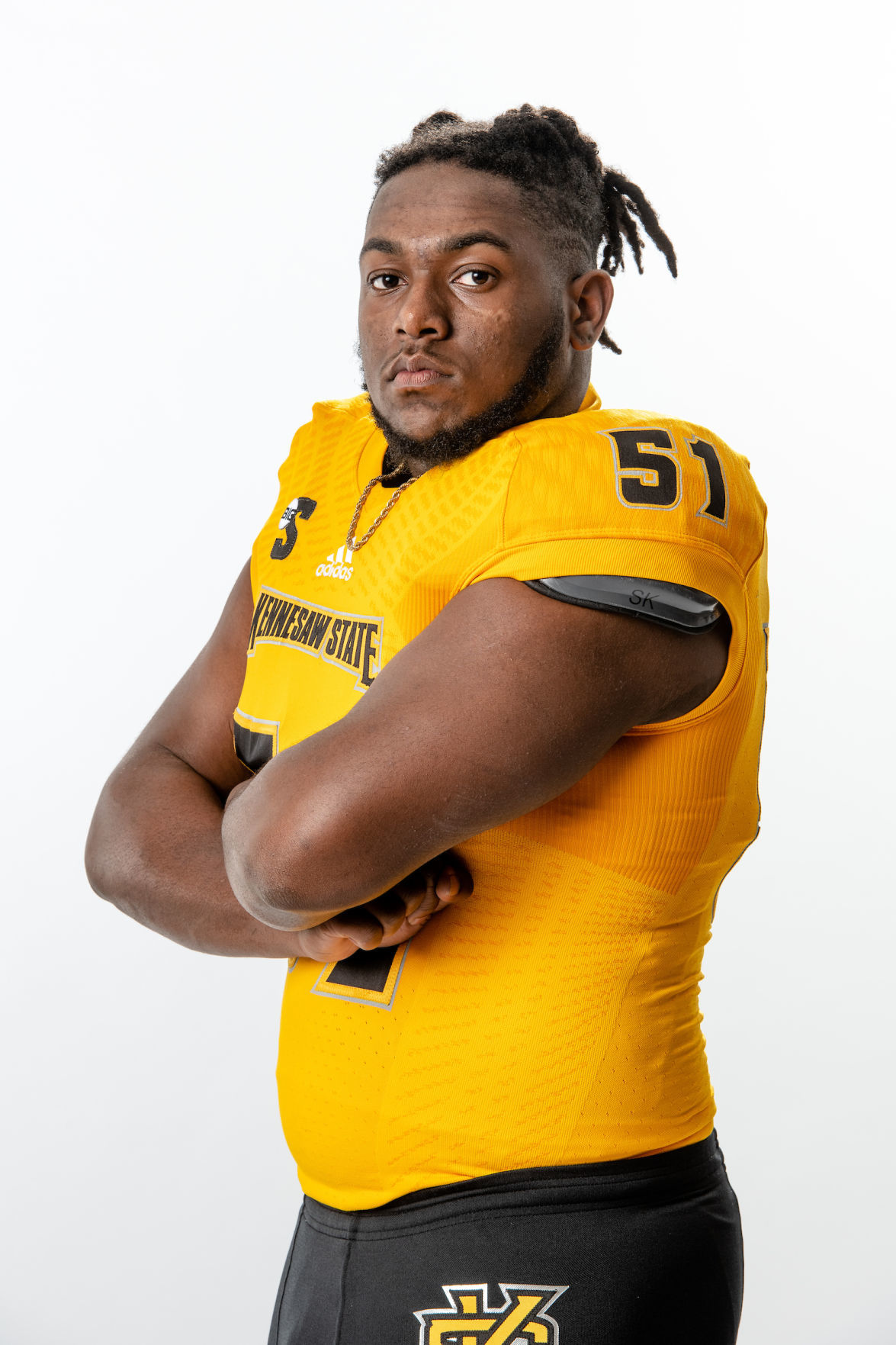 Kelcy Allen came to Kennesaw State as part of the class of 2018 after playing three years at Smiths Station and his senior year at Glenwood.

Kennesaw State defensive lineman Kelcy Allen (51) faces off with Charleston Southern's Preston Nichols (55) during the Owls' home game against the Buccaneers on Oct. 12.

Kelcy Allen came to Kennesaw State as part of the class of 2018 after playing three years at Smiths Station and his senior year at Glenwood.

Editor’s note: This is the latest in a series of stories catching up with former high school football stars from the Opelika-Auburn area as they prepare for another season at the collegiate level. Today’s story features Glenwood alum Kelcy Allen.

It was during Kelcy Allen’s freshman year at Kennesaw State when the Glenwood alum had what many would consider to be a revelation.

Allen was a beast of a defensive lineman for the Gators and was recruited for that position with the Owls, but in 2018 the coaches decided to test Allen on the offensive line.

Figuring that making the transition could help him see the field sooner, Allen went along with the plan — until one day it clicked that the move just wasn’t for him.

“I knew down deep in my heart I was a d-lineman. I played d-line all through high school — especially my senior year. That’s when I stood out. I was like, ‘I’m a defensive player, man. I know it,’” Allen said. “It finally clicked in my head that I was a defensive player and I was going to do everything in my power to show everybody that.”

Allen wound up staying on defense, and the next fall he proved that’s exactly where the Owls needed him. Allen played 10 games in his redshirt freshman season, recording 11 tackles, 1.5 sacks and 1.5 tackles for loss as part of a Kennesaw State defense that finished the year ranked third in the FCS.

Allen proved he was capable of contributing as one of the Owls’ youngest players on the field. Those moments have him eager to show he can take the next step in 2020.

“I started getting into the course of the game toward the middle of the season. It was my first season actually ever playing, and toward the end I started putting it together. That’s where my numbers got a little better,” Allen said. “My biggest dream is that we’ve got to go win that national championship. We’ve been to the playoffs these last couple years, and I think it’s time to get over the hump. That’s something we’re really focusing on this year as a team.”

Allen came to Kennesaw State as part of the program’s fifth-ever signing class to help join an Owls team that has been in contention on the national level almost from the get-go. He said he benefited greatly from being able to redshirt in 2018, explaining that it allowed him to understand how to manage his time while constantly preparing for his moment on the field.

By the 2019 season opener against Point, Allen was ready to go. The Kennesaw State coaching staff trusted him so much that they put him in the starting lineup, leading to a moment Allen won’t soon forget.

“Just hearing my name out there on the jumbotron and them saying I was from Smiths Station, Alabama, was something I never thought I’d ever hear. It was just very impactful,” Allen said. “All my family was there. It was just something I dreamed of.”

Allen was treated to another big moment the next week when the Owls traveled to Kent State for a nationally-televised showdown. Although Allen was facing off against an FBS opponent, he wasted no time in showing out and recorded his first career sack by shaking off a double team and bringing the Golden Flashes’ quarterback to the turf.

Although the Owls came up short against Kent State, the loss didn’t linger for long. Kennesaw State put together a 10-win regular season as Allen did his part to help the defensive line give the Owls’ opponents nightmares.

In a season full of enjoyable experiences, Allen pointed to Kennesaw State’s victory over Charleston on Oct. 12 as his personal highlight.

Allen made a habit of contributing whenever he was on the field, but the numbers show he truly got better as the year went along. He recorded seven of his 11 tackles on the year in the final four games he played in, and he recorded a pair of tackles in three of those last four games.

In Allen’s opinion, getting comfortable with just how fast gameplay is in college football was pivotal to his late-season success.

“It’s fast. It’s like standing in the middle of an interstate,” Allen said. “It’s quick. A play happens in two or three seconds maybe.”

Allen spoke about how much it meant to hear his hometown called out when he was on the field, and he said he hopes Smiths Station loves him just as much as he loves it. He credited Glenwood coach Jason Gibson — who Allen first met when he was playing little league arena football in Columbus — and assistant Robert Risdon for helping him turn his raw potential into being a truly dangerous defensive lineman.

Allen has big dreams, as he plans on majoring in engineering with the hopes of turning his love of cars into owning an automotive shop one day. Before that happens, he wants to make a name for himself on the field as someone who can help the Owls reach the pinnacle of the sport.

Allen has spent the offseason focusing on his speed in order to rejoin the team in better shape than ever. He’s not shy about offering up his goals for the team, namely being a deep run in the FCS playoffs and bringing home the championship trophy.

Allen recalled how Kennesaw State set itself apart in recruiting, noting how the coaches showed him so much attention and outlined the team’s path to greatness. Now, he’s counting down the days to early July when he can rejoin the team and begin working as a group toward what he hopes is an unforgettable year.

“I’m ready. I’m itching. I’ve got to work hard and try to get that national championship ring. That’s the ultimate goal this year,” Allen said. “It would mean absolutely everything to me, to have that ring, to show that I’m a national champion and to know I worked hard for it.”