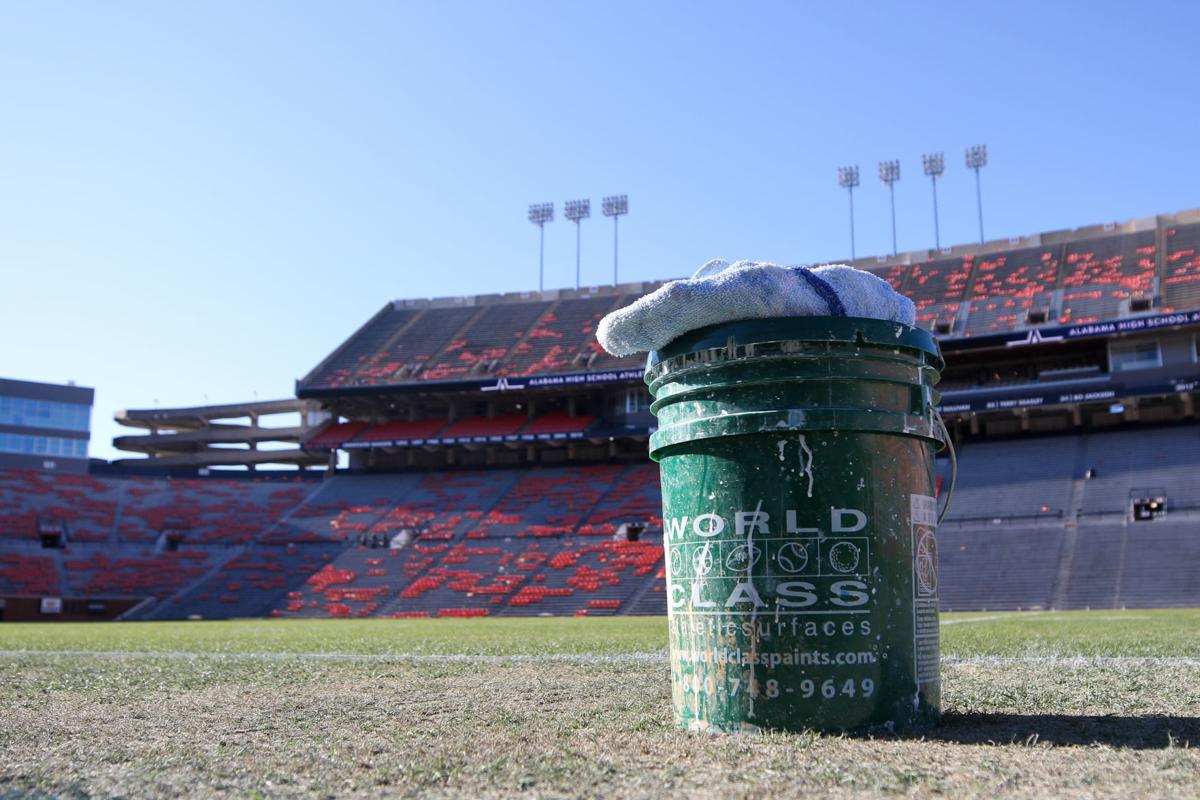 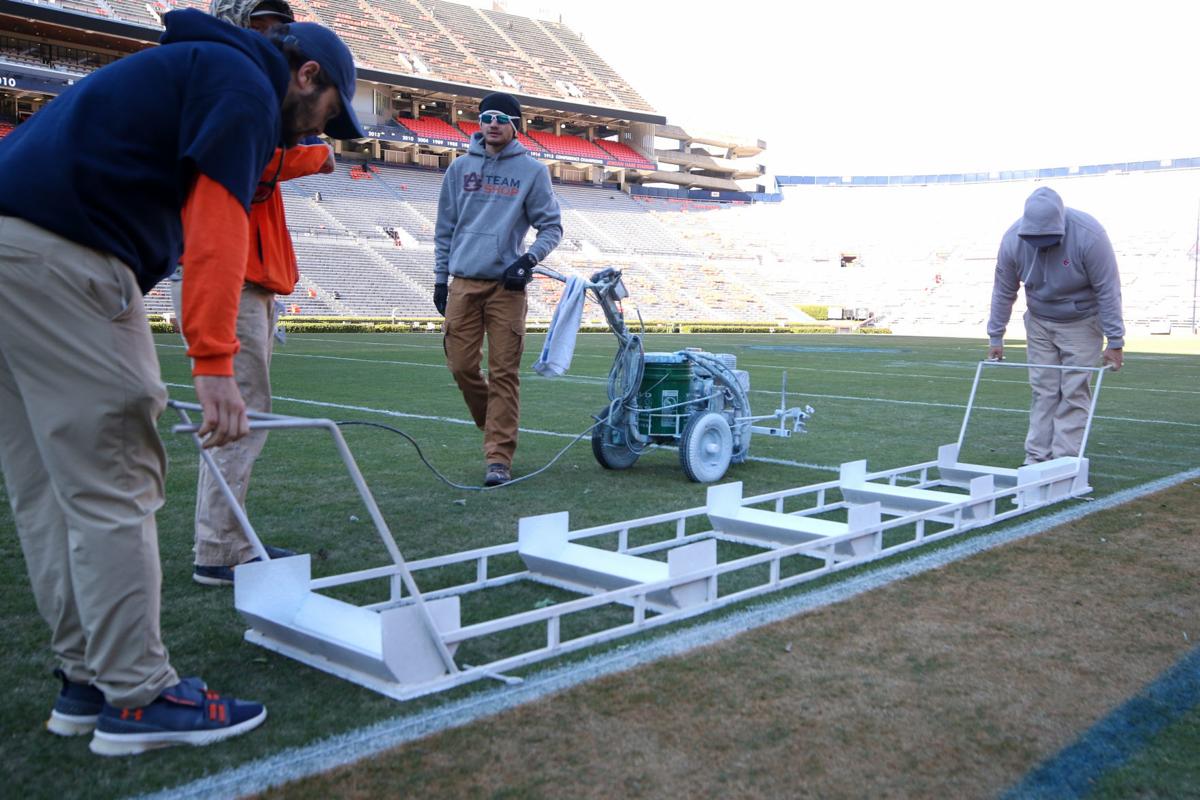 Members of the Auburn University grounds crew prepare Pat Dye Field at Jordan-Hare Stadium for the upcoming Super 7 games this week. Auburn University director for turf and landscape services Eric Kleypas said it would take more than 250 gallons of paint to get the field prepared for the seven AHSAA football title games. 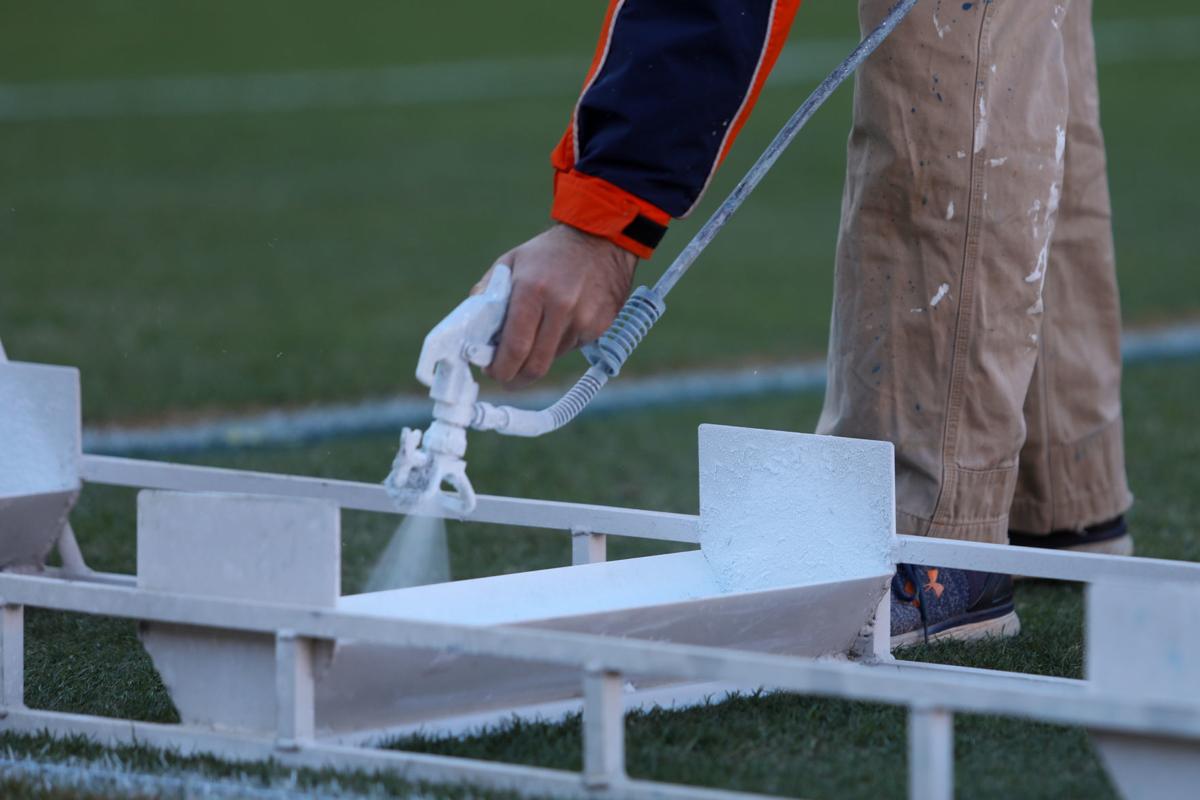 Walt Nicholson paints the lines on Pat Dye Field to prepare for the upcoming Super 7 games this week at Jordan-Hare Stadium.

Members of the Auburn University grounds crew prepare Pat Dye Field at Jordan-Hare Stadium for the upcoming Super 7 games this week. Auburn University director for turf and landscape services Eric Kleypas said it would take more than 250 gallons of paint to get the field prepared for the seven AHSAA football title games.

Walt Nicholson paints the lines on Pat Dye Field to prepare for the upcoming Super 7 games this week at Jordan-Hare Stadium.

Eric Kleypas usually has time on his side when it comes to prepping for the Super 7 being held in Jordan-Hare Stadium. This year, however, is anything but typical.

This year’s edition of the AHSAA’s high school football championship series begins Wednesday with the Unified Game at 3:30 p.m. and the Class 7A title game at 7 p.m. Renovations to Tuscaloosa’s Bryant-Denny Stadium led the AHSAA to return to Jordan-Hare this year, making it the first time either of the two stadiums hosts the Iron Bowl and Super 7 in the same year.

This was the scene yesterday at Jordan-Hare Stadium as the grounds crew went to work to get everything ready for the AHSAA Super 7 championship games. Will the field be ready? Yes. The hedges? Ehhhhh

Tomorrow I’ll have a story on their quick turnaround after the Iron Bowl 👀 pic.twitter.com/Wtiop5U73i

It’s a new challenge for Kleypas, Auburn University’s director for turf and landscape services, and his crew. He knew that having only three days between the Iron Bowl and the first championship game would be daunting; however, he and his crew have taken on similar situations in the past.

“We knew it was a challenge, but we’ve had challenges before. We were open to whatever the big dogs and administrators wanted to do,” said Kleypas, an Auburn alum who has worked there since 2002. “(Having a good crew is) critical. We’ve been working extra hard just trying to get ready for the last home game. When you think it’s over, you turn around and get up again for the high school games.

That confidence was certainly an important factor in the AHSAA approving the return to Jordan-Hare, as was the crew’s well-established standard of excellence.

D. Mark Mitchell, a co-chairman of the Super 7 and the vice president of the Auburn-Opelika Sports Council, said Auburn’s turf management crew has a reputation that speaks for itself; Kleypas’ reassurances left the decision-makers feeling good about having everything ready in time.

“When we first got notice that the University of Alabama asked us to ask the university about taking this year’s Super 7, the first thing we thought of was the field, public safety and on and on down the list,” Mitchell said. “We knew from the beginning that, No. 1, Jordan-Hare Stadium is always in the best shape this time of year, and No. 2, if anybody could get it done they could get it done. When they said they were committed to do the best and would do the best, there was no reason to second-guess them.”

Kleypas said the plan was for the crew to have Sunday off, then come in Monday morning and change the goal posts so they are high school regulation. They also planned to change the hash marks to the high school standards, mark out the high school stencils and begin painting the field in a process that would likely go into Tuesday afternoon.

Kleypas has six full-time employees and about a dozen students who will work up to 20 hours when available between classes. He expected about half of those students to be helping at any given time in order to get things ready for the opening day of games.

Because of how fresh the paint was for the Iron Bowl, Kleypas said the crew would not paint over Auburn’s logos but would instead add the Super 7 logos in the additional space on the field.

“It takes about 250 gallons of paint to paint for an Auburn game, so it will take even more for the high schools. We’re adding logos to it instead of painting over the top of Auburn’s faded logos,” Kleypas said. “It’ll take a lot of paint.”

Auburn’s hedges might not be in the best shape come Wednesday, but Kleypas was as prepared as possible for fans potentially storming the field. Days before the Iron Bowl, he explained any damage done to the actual field should be manageable as long as the field was not wet due to rain.

“It kind of depends on the weather and time of day,” Kleypas said. “Then you just hope for the best.”

A year in review: Top sports headlines from 2019