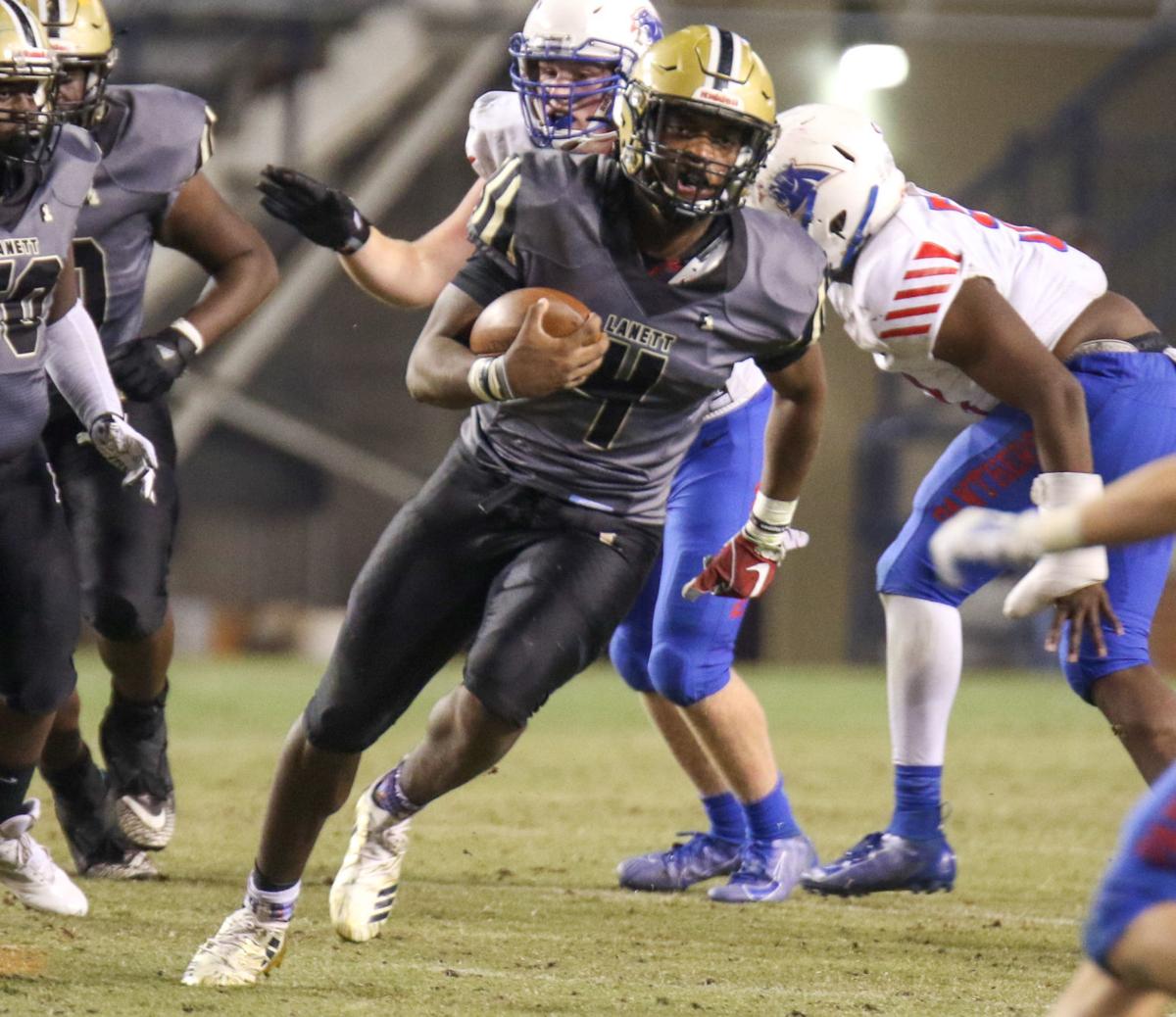 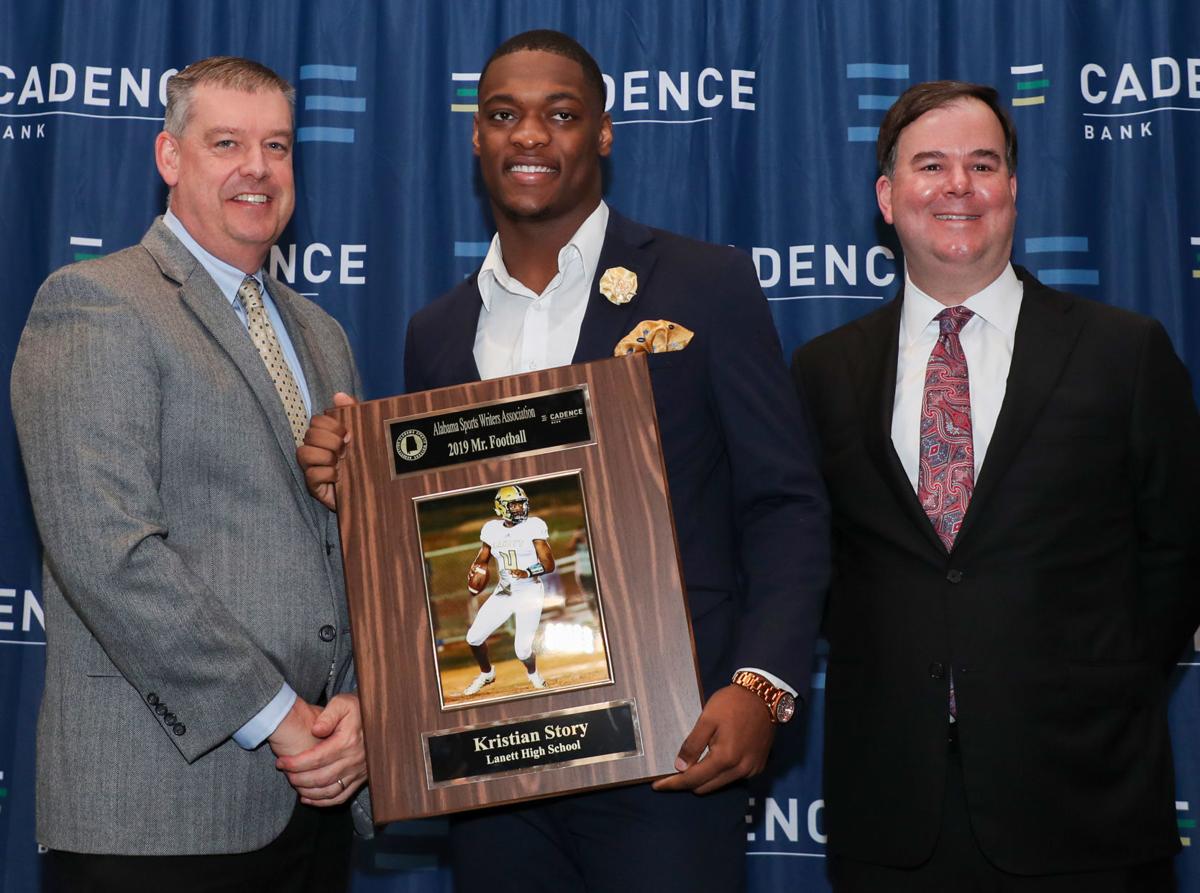 Lanett's Kristian Story receives his Mr. Football plaque during the ASWA Mr. Football Banquet presented by Cadence Bank in Montgomery, Ala., on Jan. 15.

Lanett's Kristian Story receives his Mr. Football plaque during the ASWA Mr. Football Banquet presented by Cadence Bank in Montgomery, Ala., on Jan. 15.

Lanett’s Kristian Story made the most of his last run with the Panthers during the 2019-2020 school year. As a result of his excellence, Story has been chosen as the best of the best in Alabama.

Story was named Alabama’s Male Athlete of the Year by AL.com on Monday. The award comes after the Alabama Crimson Tide signee led the Panthers’ football team to its second state championship in three seasons and led the basketball team back to the state championship game.

“(Receiving the award) means a lot,” Story told AL.com. “It was a fun year. It will never be lost on me how special it was to get to do what you truly love with and in front of people who truly love you. You don’t get to do that all the time.”

Story hit the ground running last fall despite still recovering from offseason shoulder surgery to start the season. After being limited in the Panthers’ first few games, he roared back to his regular self and led Lanett on a wild ride to a 14-0 season. Along the way, he threw for 2,865 passing yards and 35 touchdowns and also ran for 1,293 rushing yards and 17 touchdowns and broke two AHSAA career records for yards and total touchdowns.

Story capped off his historic high school run with a game to remember in the Class 1A state title showdown against Mars Hill Bible. He would not be denied during his first 60 minutes in Jordan-Hare Stadium, as he threw for a Class 1A title game-record 249 yards, ran for 111 more, scored four touchdowns, made an interception and snagged the game-sealing fumble in the Panthers’ 41-30 victory.

To no one’s surprise, Story received Most Valuable Player honors during the postgame festivities.

“It really hasn’t hit me yet. When I get to the locker room, it’ll probably hit me because I’m like, ‘I’m taking my uniform off for the last time,’” Story said after the game. “It was very significant to me. It was my last time out there with my brothers. I just wanted to end it on a good note and not go home sad thinking our season was in vain. It was a great feeling.”

The MVP trophy was just the first of many individual awards Story received in the aftermath of his perfect season.

As action-packed as the football season was for Story, he wasn’t done once the clock hit all zeroes in Auburn.

Story stayed at Lanett for the basketball season and was a consistent contributor for the Panthers, averaging eight points, six assists and four rebounds per game. The Panthers turned it on come the postseason, winning five games in a row to punch their ticket to the title game for the fourth time in five years.

Lanett found itself in a shootout with Pickens County in the state championship game, but ultimately the Panthers came up short in a 57-55 loss. Story ended his basketball career with nine points, five rebounds and two assists.

Now, Story’s focus is turned to Tuscaloosa. A four-star athlete recruit, Story signed with the Crimson Tide during the December signing period after committing to the team in July.

“I just felt like it was the best fit for me academically and athletically. It was a family feel there ever since they began to recruit me,” Story said upon making it official. “My emotions right now are all over the place, really. Knowing that I grew up an Alabama fan dreaming of playing for them and now I’m actually signing to go play for them, it’s a surreal feeling.”

Story told AL.com he expects to play defensive back at Alabama.

Copyright 2020 The Associated Press. All rights reserved. This material may not be published, broadcast, rewritten or redistributed without permission.