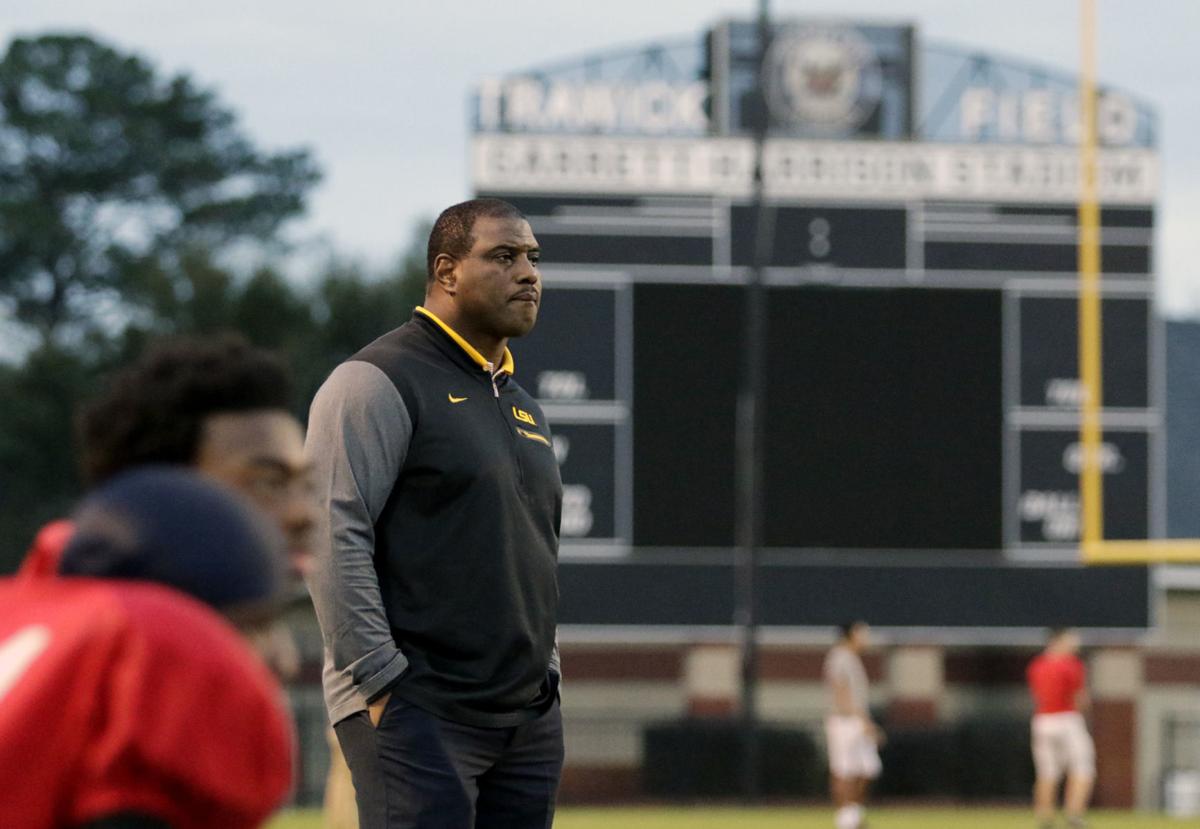 LSU assistant Tommie Robinson came back to his alma mater in November 2018 to check in on then-senior quarterback Peter Parrish, who is now a true freshman at LSU. 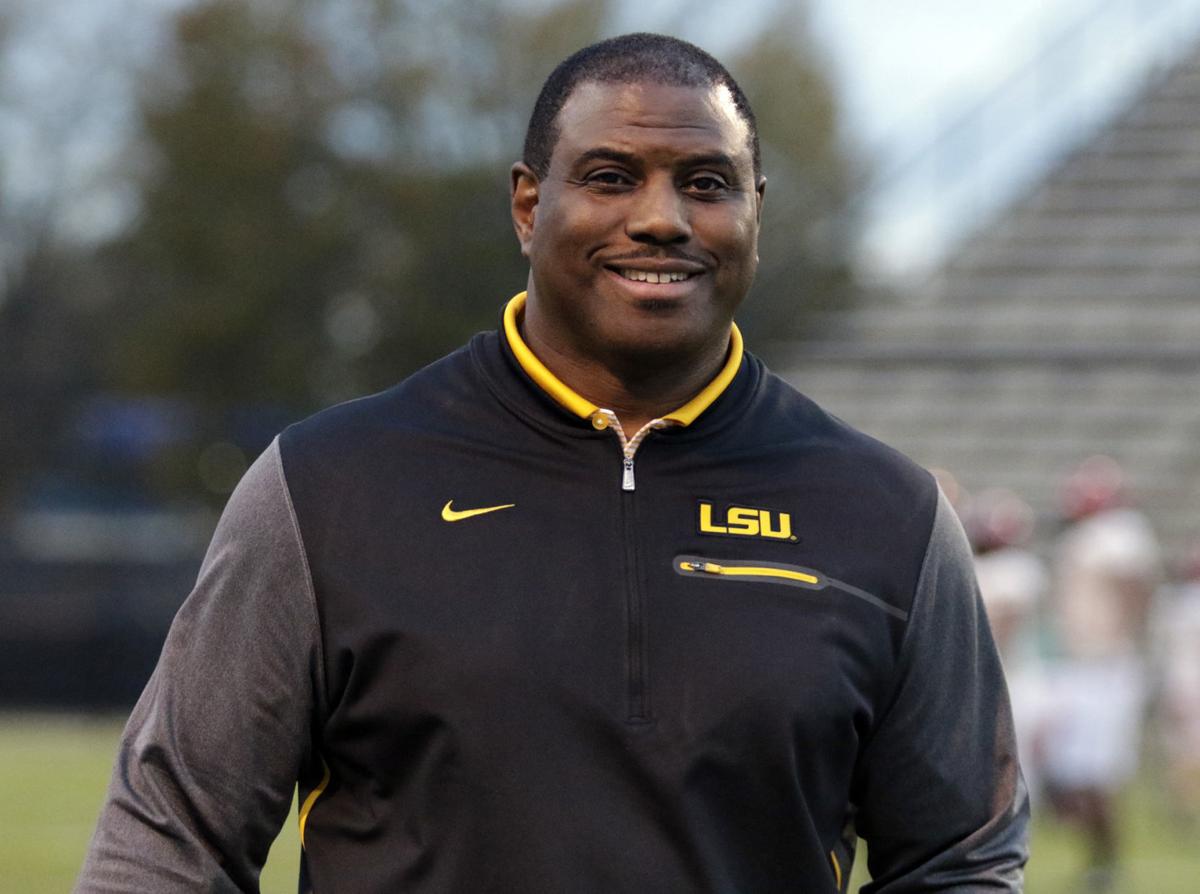 When the LSU Tigers take the field against Oklahoma in the College Football Playoff semifinals this afternoon, the phone in Willie Pearl Robinson’s house might as well be off the hook.

Willie Pearl, the 80-year-old mother of LSU assistant coach Tommie Robinson, has strict rules when her only son’s team is in action. She will not answer the phone during the game, and all conversations between those watching with her must cease until the clock hits all zeroes.

“Oh my God, she is so into the game,” said Deborah Lowe, one of Tommie’s sisters. “She doesn’t entertain no one while the game is on. You do not mess with her while coach Robinson is out here. You do not, no sir. It would have to be an emergency for her to pick up the phone.

“When they lose, I think she’s more upset than the coaches. It really breaks her heart.”

Willie Pearl’s pride in her son is understandable, especially given everything he’s accomplished to reach this point. Robinson got his start in the football world in Phenix City before embarking on a 34-year coaching career that has led him to today, when he and the Tigers stand two wins away from a national championship.

Love of the game

Tommie Robinson was born on April 4, 1963 as the third child and first son of Willie Pearl and Tommie Sr.

Deborah, who is 14 months older than Tommie, said it was evident by the time Robinson was about 7 years old that he had a natural love for football. Alonzo Cliatt, who grew up with Robinson, said Robinson’s consistent status as the smallest player on the field never hindered him, and even at that young age he had a hatred for losing that made him hard to contain.

Around 10 years old, Robinson, Cliatt and Benny Thomas were asked to integrate the Columbus Jets rec league football team across the Chattahoochee River in Georgia. With Tommie Sr.’s blessing, Robinson joined the team.

Cliatt continued playing football alongside Robinson once they reached Central High, where Robinson played linebacker. Even though Robinson — who everyone called “Key Man” — often had a size disadvantage, Cliatt said his passion for playing drove him to make big play after big play.

“I haven’t seen a guy who just liked to — no matter how hard he got hit or how hard he hit somebody, he was always laughing. That was it. He ate, slept and played football all the time,” Cliatt said. “He was always like the youngest guy. He was a little smaller than I was at the time. Man, when you talk about somebody who loved football, that was Tommie. And I thought I loved football.”

After graduating from Central, Robinson was all set to continue playing at Alabama State — or so he thought.

Robinson arrived at the campus in Montgomery only to find out that no one there knew who he was. He returned to Phenix City and explained his predicament to Central trainer Chuck Ash, who had graduated from Troy prior to landing his job in Phenix City.

Ash contacted Trojans head coach Charlie Bradshaw, and shortly thereafter he and Robinson were in the car headed to Troy. Ash had known Robinson long enough to recognize he wasn’t your average football player.

“He was a really good football player, but he was really respected as a person probably more than for his football abilities. He was just one of those guys where if he told you something, it was always going to be true.”

Robinson excelled at Troy as a strong safety and was a member of the Trojans’ 1984 Division II national championship team. As meaningful as his time playing in college was, it more importantly planted the seed for Robinson’s life after hanging up his cleats.

Chan Gailey took over as Troy head coach prior to the 1983 season and managed to win a national title in just his second season at the helm. Gailey quickly became a mentor to Robinson, and it was Gailey who first broached the idea of Robinson trading in his jersey for a whistle.

“With the things that we were taught at Troy and from him as a head coach — and just about life itself — I learned so much football from Coach Gailey while being a player at Troy. He’s just been a staple in my life,” Robinson said. “He’s actually the one who talked me into going into coaching. When I was a player at Troy, he was the one who came to me and said, ‘You ever thought about coaching?’”

Robinson spent 1986 and 1987 as an assistant coach at Woodham High School in Pensacola, Florida, followed by two seasons back at Central. Ash estimated Robinson returned to Troy in 1991 for about three weeks — “long enough to go to a couple barbecues and some donor outings” per Ash — until Arkansas hired him as a graduate assistant.

Robinson spent one year at Arkansas, two years at Utah State and four years at TCU before Gailey came calling. Gailey had been hired to replace Barry Switzer as the Dallas Cowboys’ head coach, and he wanted his former player to come on board as part of his first staff.

Robinson jumped at the chance to coach “America’s Team.” During his three seasons as a Dallas assistant, the Cowboys won 23 games and the NFC East division in 1998.

Robinson became Oklahoma State’s running backs coach in 2001, and after that year Gailey became the head coach at Georgia Tech. Gailey again hired Robinson to his staff, and he arrived as the Yellow Jackets’ wide receivers coach.

Robinson inherited a receiving corps headlined by Kerry Watkins, who had put up 674 yards and five touchdowns as a junior the year before. Watkins excelled in his lone season playing for Robinson, as he led the ACC with 71 receptions and wound up second in the conference with 1,050 receiving yards.

Watkins proved to be the only Georgia Tech senior from the 2002 team invited to the NFL Combine.

“He just had total command over his position group. We loved playing for Tommie. The players had the utmost respect for him. You could relate to him, and he understood. He was there to help you throughout the process on and off the field. He cared about you as a person,” Watkins said. “In that year, he put me in a position to be successful. They recognized my talent and my strengths, and he put me in a position to have success.”

Robinson left Atlanta after the Yellow Jackets’ 2005 season then spent the next four years at Memphis and Miami (FL). He returned to the NFL for a three-year stint as the Arizona Cardinals’ running backs coach, during which time running back Beanie Wells became the first player in franchise history to rush for at least 1,000 yards and scored 10 touchdowns.

Robinson returned to college to coach at USC in 2013, Texas in 2014 and 2015 and then again at USC in 2016. It was his first stint with the Trojans that eventually led him to Baton Rouge.

Robinson was the running backs coach and passing game coordinator for Lane Kiffin, and during that time Robinson pushed for the USC coaches to get scout team running back Javorius “Buck” Allen in the mix. USC defensive line coach Ed Orgeron said he was the only other coach backing Robinson’s assertions, which came in handy once Orgeron was named interim head coach on September 29, 2013.

After taking just six carries the year before, Allen wound up being the team’s leading rusher with 785 yards and 14 touchdowns as the Trojans put together a 6-2 record under Orgeron’s leadership.

Orgeron was ultimately passed over as USC’s full-time head coach, but he had made a lasting impression on Robinson.

“(Not promoting Orgeron) was a mistake, but God had a bigger plan for him,” Robinson said. “He and I had become real close, and I told him, ‘Hey, if you ever get a head job somewhere, call me. I’m coming.’ He did.”

Orgeron became the full-time head coach at LSU prior to the 2017 season, at which point Robinson left USC for a second time and joined the Tigers’ staff as running backs coach, recruiting coordinator and assistant head coach.

Robinson’s work with the Tigers has been on full display during the Tigers’ undefeated 2019 campaign. Just like Robinson recognized Allen’s talent at USC, he has taken a 5-foot-8 three-star recruit in Clyde Edwards-Helaire and helped him put together a 1,290-yard season through 13 games.

“Tommie is a good evaluator and a heck of a developer of talent,” Orgeron said. “Tommie was with me at the University of Southern California and helped me turn that thing around. He’s a tremendous recruiter ... Look at the way (our running backs are) playing. They’re playing phenomenal.”

Phenix City is a hotbed for Alabama and Auburn fans, but Deborah said she’s noticed the strangest thing lately. The last few times she’s been out grocery shopping in town, she’s spotted more than one person sporting LSU gear.

That uptick in love for the Tigers can be attributed to many things, including LSU signing former Central quarterback Peter Parrish last year. But the growing affection for the Bayou Bengals in Phenix City could also be courtesy Robinson, who has represented his hometown well ever since he left.

“I have a lot of support from my former coaches in high school and my players and teammates. A lot of my teammates are Alabama and Auburn fans, but when we played against those schools they would show me some support on social media and everything,” Robinson said. “I went home and went to a basketball game a couple weeks ago. I was looking in the stands, and I saw about three people with LSU shirts on. I ain’t ever seen that before. It’s good. It means a lot.”

ATLANTA — Going back to his days at Central-Phenix City, Peter Parrish is used to being the …