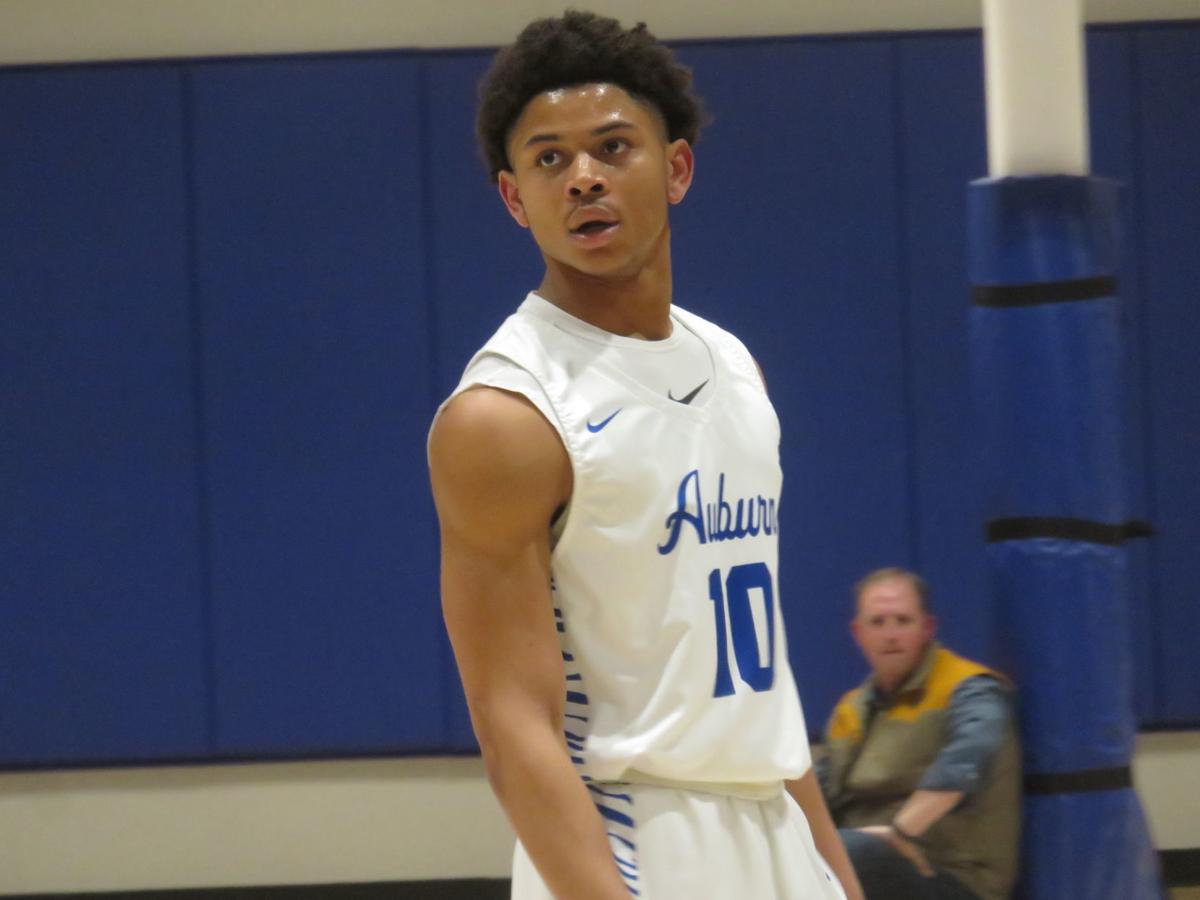 Auburn High's Noah Warren waits for play to resume during the Tigers' home game against Central-Phenix City in the Area 4-7A tournament title game on Saturday. 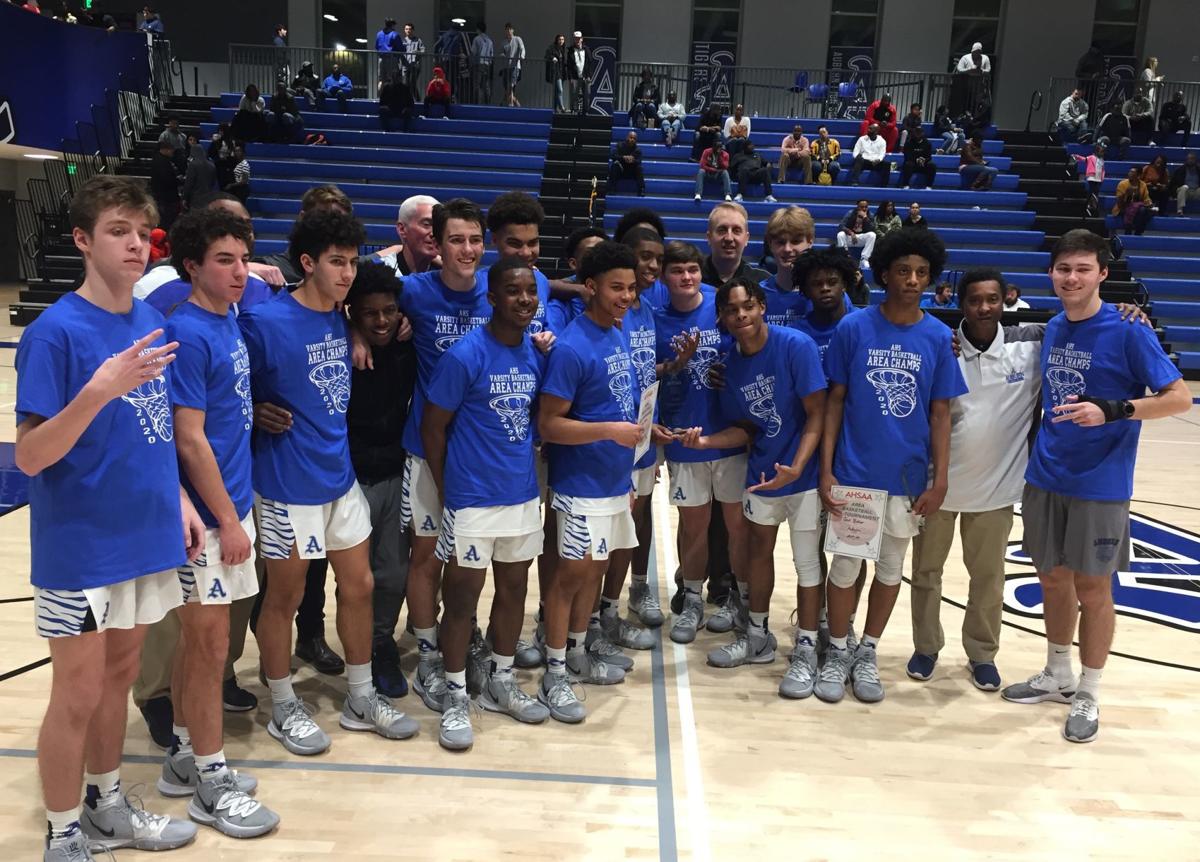 The Auburn High Tigers celebrate after winning the Area 4-7A tournament by beating Central-Phenix City on Saturday.

Auburn High's Noah Warren waits for play to resume during the Tigers' home game against Central-Phenix City in the Area 4-7A tournament title game on Saturday.

The Auburn High Tigers celebrate after winning the Area 4-7A tournament by beating Central-Phenix City on Saturday.

When the Auburn High boys hit the locker room with a three-point lead over Central-Phenix City on Saturday, Tigers head coach Chris Brandt told his team not to worry. The Tigers, he explained, were advancing no matter what, but he was totally confident they would be doing so as area tournament champs.

Auburn hit a barrage of 3-pointers in the third quarter to spark a 14-0 scoring run that fueled a 51-35 victory over Central. The victory, which came on Auburn’s home court, marked the first time the Tigers have won the area championship since 2012.

“The first half we were playing so tense. We were trying to not make a mistake, and we were scared to shoot the ball,” Brandt said. “I think by halftime it was about just calming them down and saying, ‘Hey, this is our tournament to lose. Just go out there and play hard. What happens happens.’

“I told them, ‘We’re going on no matter what Thursday (in the state regionals), but we’re going to win this game. I believe in you. Keep on shooting the ball.’ That’s what they did.”

After Central made a run before halftime to create a one-possession contest, Auburn started the third quarter in total control.

The Tigers had already fired off five unanswered points when Eli Elston drilled a 3-pointer to make the score 23-17 in Auburn’s favor. Thirty seconds later, Quinnus Fletcher connected on a 3 of his own to put the Tigers up nine points with 3:25 left until the fourth.

Fletcher wasn’t done at that point, as he stole the ball from the Red Devils shortly thereafter and passed off to Jae Baker, who knocked down another 3-pointer for the Tigers. On the next possession, it was deja vu for the Tigers: a steal, a pass off to Baker, and another perfect shot from behind the arc.

By the time Baker’s second spot-on 3 in two possessions hit the bottom of the net, Auburn had successfully reeled off 14 unanswered points and now led the Red Devils 32-17. Baker ended the night with a game-high 16 points with four 3-pointers to his credit and was named the All-Area Tournament MVP.

“He is a tremendous scorer. Throughout the year, he’s made some big shots. He won the game at Handley on a last-second 3, and I believe he also had a game-winner against Beauregard at their place,” Brandt said of Baker. “He’s not afraid to shoot the ball — we’ve just got to get him going. Sometimes he gets into lulls and into bad shots to shoot, but once he gets a shot or two in he has so much confidence in himself.”

From the point Baker put the Tigers ahead by 15, the home squad simply worked the clock to put Central away. The Tigers still had plenty of highlights in the remaining time — which included a monstrous dunk from Baker in the final minutes — but the main focus was killing time and starting the celebration.

Noah Warren followed Baker’s lead and finished the night with 12 points and All-Tournament honors. Quinnus Fletcher was also named to the All-Tournament team after dropping seven points in the victory.

For Central, Xavier Carnes and Jerrell Bellamy were named to the All-Tournament team. Carnes had a team-high 15 points, while Bellamy put up six points and a game-high 12 rebounds.

Both teams advance to the state regionals, and Auburn will face off with Jeff Davis on Thursday.

Brandt spoke highly of this year’s team, saying they are a care-free team for the most part and one that has more depth than he’s had in quite some time. The Volunteers promise to make for an interesting matchup in Montgomery, but as far as Brandt is concerned, the Tigers don’t need to change a thing in order to have a chance.

“I think as long as we continue to play the defense that we’re playing, run our offense, not try to do too much and stay in the system, we’re going to be fine,” Brandt said.