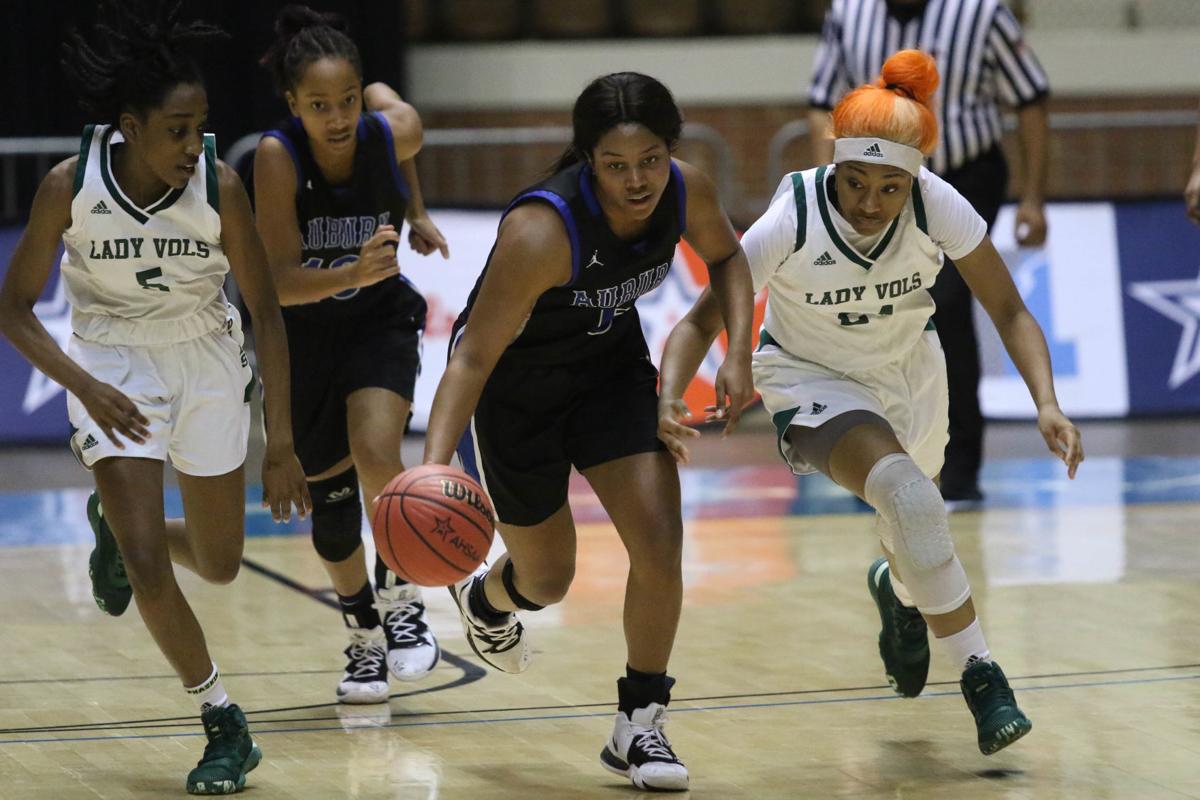 Auburn High's Olivia Porter (5) steals the ball and dribbles up the court during the Auburn High vs. Jeff Davis girls Class 7A Regional Semifinals at Garrett Coliseum in Montgomery on Thursday. 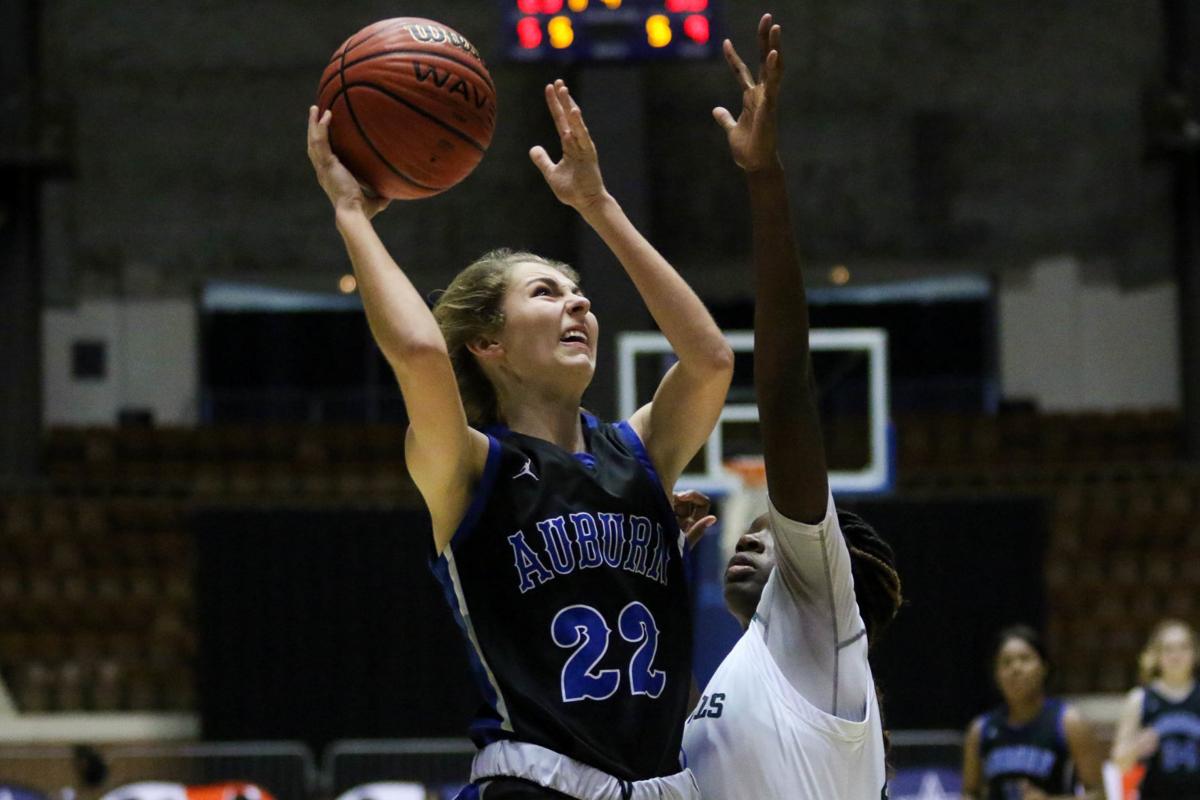 Auburn's Kennady Fetner (22) shoots over a Jeff Davis defender during the Auburn High vs. Jeff Davis girls Class 7A Regional Semifinals at Garrett Coliseum in Montgomery on Thursday.

Auburn High's Olivia Porter (5) steals the ball and dribbles up the court during the Auburn High vs. Jeff Davis girls Class 7A Regional Semifinals at Garrett Coliseum in Montgomery on Thursday.

Auburn's Kennady Fetner (22) shoots over a Jeff Davis defender during the Auburn High vs. Jeff Davis girls Class 7A Regional Semifinals at Garrett Coliseum in Montgomery on Thursday.

MONTGOMERY — The Auburn High girls reached the state semifinals last season and officially began their hunt for a similar run Thursday in Montgomery. Although the stakes have never been higher for this year’s Auburn team, the Lady Tigers never flinched.

Auburn took control of its Class 7A Southeast Regional Semifinal against Jeff Davis early on by piecing together a 16-1 run in the game’s opening quarter to set the stage for a dominant 62-28 victory. The win for the Lady Tigers propels them to the regional finals, where they will play area rival Central-Phenix City at 9 a.m. Tuesday in Montgomery.

“We talked all week about rebounding. We knew that they had some really big post players that were athletic and could run the floor. We knew coming in that (Ke’Ajia Williams) from seeing her in the AAU circuit. She’s a really good player,” Auburn coach Courtney Pritchett said. “Our focus the entire week was just to find a way to box her out, find a way to know where her body is when the shot goes up.

“Our post players did a great job, and everybody did a good job of buying into rebounding.”

Auburn (21-10) found itself down 2-0 in the opening minutes against the Lady Volunteers before Olivia Porter and her teammates turned up the heat.

While implementing a tight press defense, the Lady Tigers pushed Jeff Davis (16-14) around for the majority of the first quarter courtesy well-timed steals and excellent shooting all around. Auburn built a 9-0 scoring run before Jeff Davis added one free throw, after which the Lady Tigers rattled off seven more points without the Lady Vols finding the basket.

The highlight of Auburn’s one-sided run came courtesy consecutive plays from Brianna Harris with just over a minute left in the opening quarter. After successfully stealing the ball and hitting a layup, Harris immediately came back on the next possession, stole the ball, made the layup and drew a foul.

After Harris’ initial free throw was not counted due to a Jeff Davis lane violation, she came through on her second attempt to hand Auburn a 16-3 lead with 51 seconds to go in the opening quarter.

The Lady Tigers followed their strong first quarter by outscoring Jeff Davis 15-7 in the second to effectively put the game away. In the first half alone, Auburn forced 24 turnovers by the Lady Vols, and 21 of Auburn’s 33 points after two quarters came directly off turnovers.

While several Auburn players came through with big plays in the victory, none outshined Porter, the sophomore who has been outstanding throughout her three years with the team. Porter was persistent defensively and turned the majority of her pressures into points, and her nonstop play on offense and defense prevented Jeff Davis from ever making a true dent in Auburn’s lead.

Porter ended the afternoon with a game-high 23 points along with 10 rebounds and four steals. Harris did her part as well, putting up nine points courtesy a 4-for-5 effort from the floor.

“Olivia is a very special player. I think a lot of times people don’t really realize how important she is and how good of a player she is because her game is so controlled. It’s not a wild or a lightning-quick kind of game,” Pritchett said. “I looked down at the stat sheet, and she had 16 at halftime, and I was like, ‘Where did that come from?’

“That’s what happens a lot — it’s a bucket here and a bucket there. She really kind of imposed her will tonight.”

Porter and the rest of the Lady Tigers will now regroup to take on Central, which beat Auburn in all three meetings so far this season. Although those prior meetings didn’t go the Lady Tigers’ way, Pritchett was adamant that those earlier losses mean next to nothing now.

“I think we had the recipe to beat them last game. There was one minute and 30 seconds left in the game and we were up two, so we just needed one possession where we could clock the ball,” Pritchett said. “We’ve got to be kind of what we were tonight. We’ve got to be able to dance around the ball, pressure them full-court.

“The girls have to understand what’s at stake — another trip to Birmingham is at stake. I think that’s enough to say to get them fired up and going.”