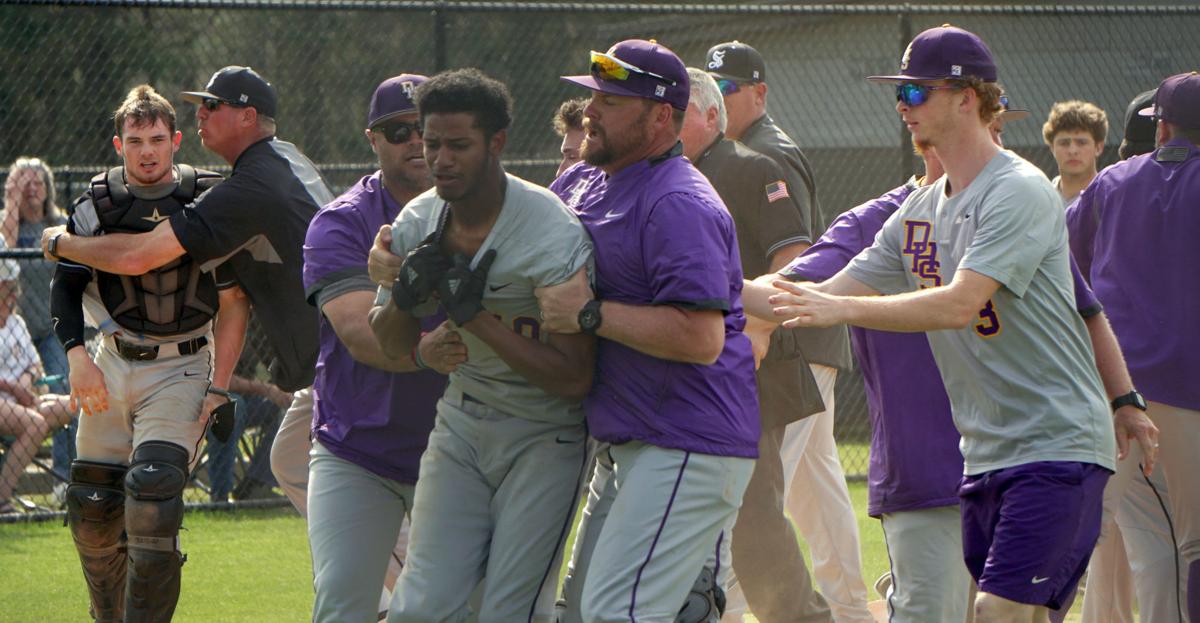 Daphe outfielder Ja'Quan Myles and Smiths Station catcher Zane Faulk are separated by coaches after a collision at the plate on Saturday in Smiths Station. 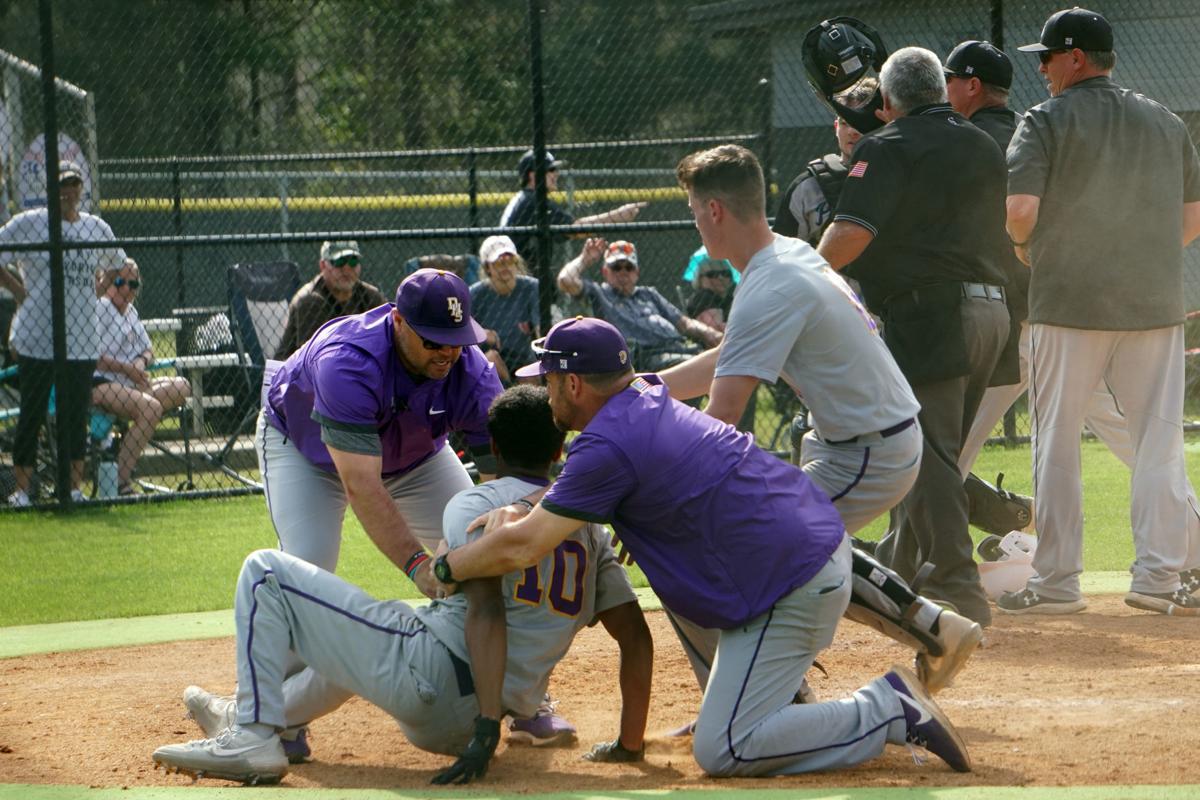 Daphe outfielder Ja'Quan Myles is held back by coaches after a collision at the plate on Saturday in Smiths Station.

Daphe outfielder Ja'Quan Myles and Smiths Station catcher Zane Faulk are separated by coaches after a collision at the plate on Saturday in Smiths Station.

Daphe outfielder Ja'Quan Myles is held back by coaches after a collision at the plate on Saturday in Smiths Station.

SMITHS STATION — There were no winners from Saturday’s baseball game between Daphne and Smiths Station.

In what would be both teams’ final game before the state shuts down the season due to the coronavirus concerns, the game was stopped in the top of the seventh inning when both teams cleared the dugouts and charged the field after Daphne’s Ja’Quan Myles and Smiths Station’s Zane Faulk collided at the plate.

On a wild pitch, Myles broke from third to try and score to extend the Daphne lead from 8-2 to 9-2. Faulk collected the ball from behind him and as both players approached the plate, they each went into a head-first drive. Faulk tagged Myles out just before he reached the plate, but with both going in head-first, Myles’ helmet flew off and he took the brunt of the collision.

“From my angle, it was basically a wild pitch that got away,” Smiths Station coach Mike Ferry said. “Their guy was aggressive on the bases and tried extend it into trying to score. It ended up being a close play at the plate.

“Their guy slid head-first into the plate and we tagged him. The tag since he was going head-first happened to be up around the shoulders and head area. Basically, he took offense to that and decided that he didn’t appreciate the way the play ended.

“I think it was a clean play. If he had gotten up and gone to the dugout, nothing would have happened because he was out. It was what it was.”

Myles didn’t see it the same way the Panther coaches did and immediately went after Faulk, and the two players began to fight as the Daphne dugout cleared and some of the Panther players rushed in from their defensive positions.

The altercation was short-lived on the field, as coaches and umpires separated the teams. Two Daphne coaches brought Myles back the visitor dugout and Ferry took Faulk back to his.

After a short meeting between the head coaches and umpires, the game was called off and the Daphne players were immediately sent to their bus.

That did not end the tensions though. As people were filing out toward the parking lot, a fight broke out between two fans and had to be broken up. It ended with both being told to leave or else deputies would be called.

In the game, Sam Bowman led Daphne with a 3-for-3 day, three RBI and two runs scored. Carson Swilling led Smiths Station with a 2-for-3 day and an RBI.

The status of the game awaits a ruling from the umpires and state athletics association after they review what happened.

“He is going to call me and let me know how we need to enter that as a game,” Ferry said. “Really and truly, at that point with tensions high and both teams riled up, it was better for us to say, let’s just end it here and move on.

“Cooler heads prevailed at the end on that and both coaches pretty much agreed that we will handle it with our own teams as far as taking care of people and talking to our own teams. And move on from it.”

The incident is a disappointing end to the first part of the season for each team as they now will take at least three weeks off while the AHSAA assesses its options amid the coronavirus concerns.

“It is uncharted territory for sure,” Ferry said.

Javi Marerro did it all for Smiths Station in Saturday’s first game as the Panthers picked up a 6-1 victory over Austin.

On the mound, Marerro delivered six innings of one-run baseball and allowed just five hits and a walk with 10 strikeouts. At the plate, he was just as good with a 2-for-3 day highlighted by a solo home run.

“He battled with the stuff he had and held their offense in check for pretty much the entire game,” Ferry said.

Zane Faulk and Luke Hasty also turned in 2-hit games while Carson Swilling, Hunter Donaldson, Jackson Huguley and Christian Bryan each had a hit. Blackmon finished the game with a shutout inning.