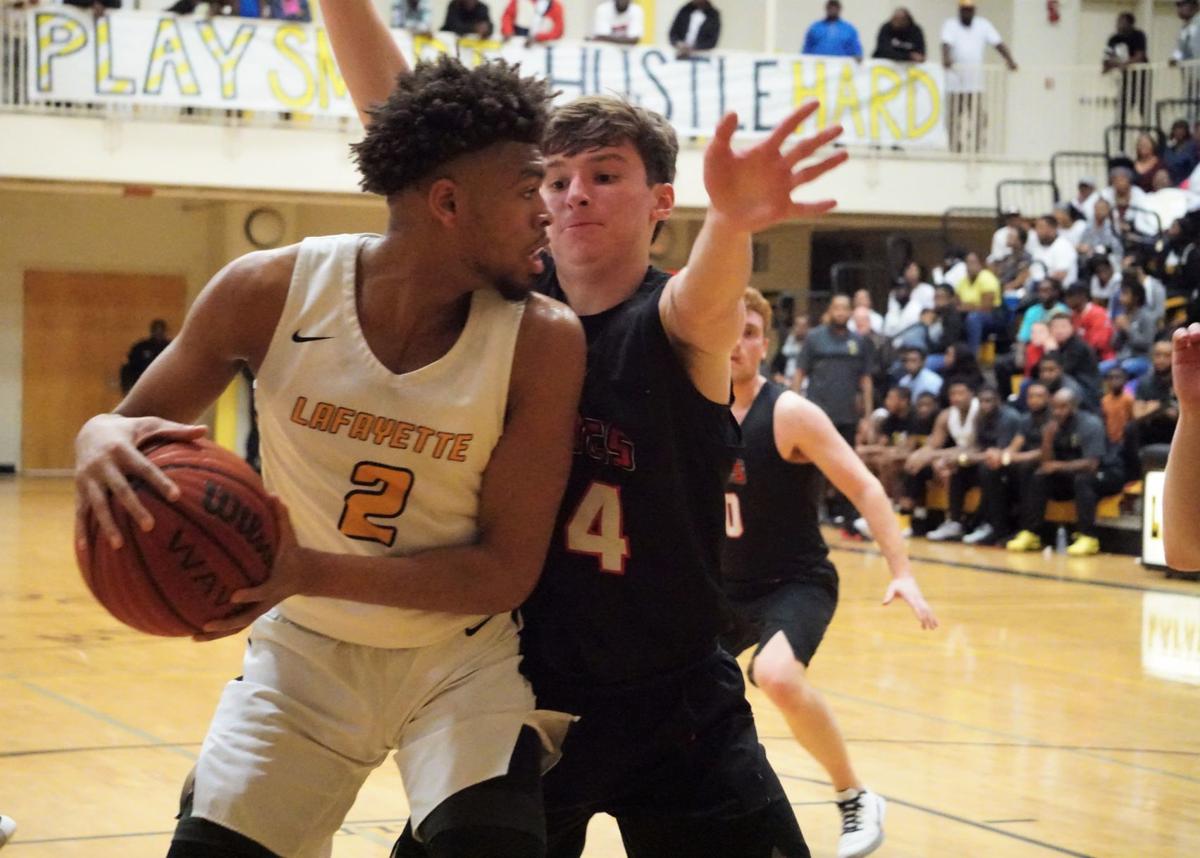 LaFayette's Tae Burton works down low against a Westbrook Christian defender in the Bulldogs' Class 2A subregional game at home on Tuesday. 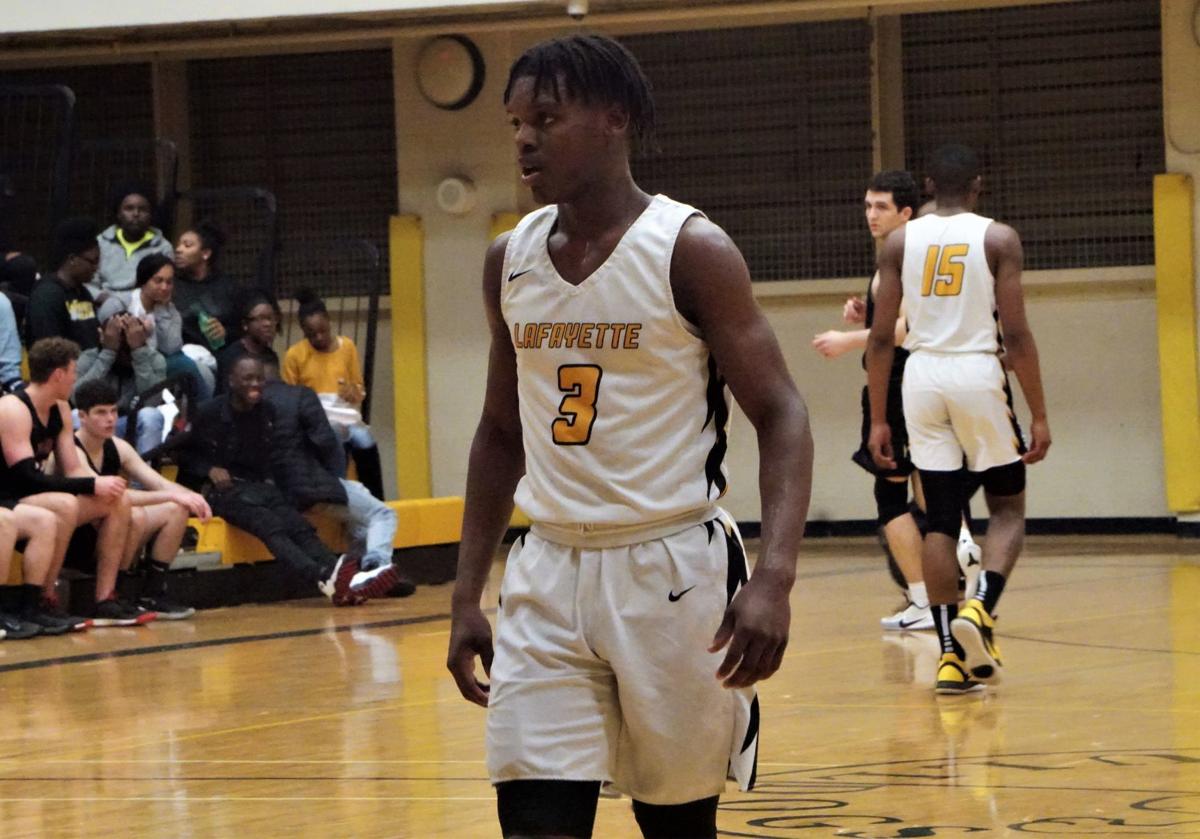 LaFayette's Corey Boston prepares to play defense during the Bulldogs' Class 2A subregional game at home on Tuesday.

LaFayette's Tae Burton works down low against a Westbrook Christian defender in the Bulldogs' Class 2A subregional game at home on Tuesday.

LaFayette's Corey Boston prepares to play defense during the Bulldogs' Class 2A subregional game at home on Tuesday.

LAFAYETTE — After an undefeated regular season, the LaFayette Bulldogs opened state tournament play Tuesday eager to keep it going. To little surprise, the Bulldogs came out and made it evident they had brought their near-perfect play with them.

LaFayette made quick work of Westbrook Christian in the Class 2A subregionals jumping out to a double-digit lead in the second quarter and never looking back in a 73-38 victory. The win propels the Bulldogs to the regional semifinals, where they’ll play either Fyffe or Asbury at 4:30 p.m. Friday at Jacksonville State.

“Our guys are in superior condition. They just never get tired. They probably can suit up right now and play a whole ‘nother game. That’s what makes this group different than any other group I’ve had and them any other year,” LaFayette coach Obadiah Threadgill said. “That and their ability to score in bunches (was huge). One Tae (Burton) gets going and Corey (Boston) gets going, they would come down and start pulling 3s on the fast break. This is a good group, and they know how to get themselves going.”

LaFayette (29-0) out shooting well with 17 points in the opening quarter, but their stellar second-quarter effort was what truly put the game on ice.

LaFayette’s offense was too much for Westbrook Christian (20-13) to even come close to containing, as over and over again the Bulldogs pushed the pace and added point after point to the scoreboard. The Warriors attempted to close the gap with some solid 3-point shooting, but their inability to slow down Tae Burton and Co. made it nothing short of a lost cause.

Burton played just as well as he has all season en route to a 23-point night for LaFayette. Before the break, he nailed a 3-pointer courtesy an assist from Corey Boston then watched with delight on the next possession when Boston stole the ball then leisurely drove to the basket for an easy two points.

Boston’s points — two of 14 on the night — gave LaFayette an 18-point lead with just over three minutes to go in the half. The Bulldogs ultimately went into the half up 21 in part due to 14 first-half rebounds.

LaFayette didn’t let up after the intermission and dropped 36 third-quarter points for what was the icing on the cake for the home squad. Burton maintained his hard-nosed defensive effort by coming through with several steals to fuel the Bulldogs’ umpteenth run of scoring.

In addition to his 23 points, Burton had nine rebounds, two assists and a game-high five steals.

Threadgill said Burton showed up to LaFayette’s gym prior to the game without his t-shirt or his tights. By its end, his clothes were pretty much the only thing he wound up missing.

“He was just engaged. We saw they were trying to hold the ball. That’s not really what they want to do, but they didn’t really want to run with us. They went into their four corners, and he just did a really good job of timing some of their passes and picked a few of them off,” Threadgill said of Burton. “When he gets in a rhythm, he’s a handful. He’s a kid who can score from all three levels, can handle the ball with either hand and can finish with either hand. He sees every inch of the floor.

“He does a really good job of getting us going, scoring, getting everybody involved. If he’s engaged in man defense like that, we’re really hard to beat.”

Threadgill’s players made quick work of their first-round opponent, but his message going into Friday was to not let up just because they started the playoffs with a dominant victory. Westbrook Christian hung around in the opening minutes of Tuesday’s action, and Threadgill emphasized that if the Bulldogs had played better that would not have been the case.

LaFayette may be perfect on the year so far, but that doesn’t mean the team has played a perfect game. Going into the regional semifinals, Threadgill is hoping his team takes that to heart and looks to take a step in that direction in Jacksonville.

“It’s hard to tell 18-year-olds that, listen, we can be better when they’re looking at the final result and it was a 30- or 40-point victory. We can be better,” Threadgill said. “We can do some things to give ourselves a cushion even earlier so other teams won’t be able to hold the ball and dictate pace. We know it’s coming if we’re up 20 — we know you’re fixing to do something tricky. It’s about handling each phase of the game.”