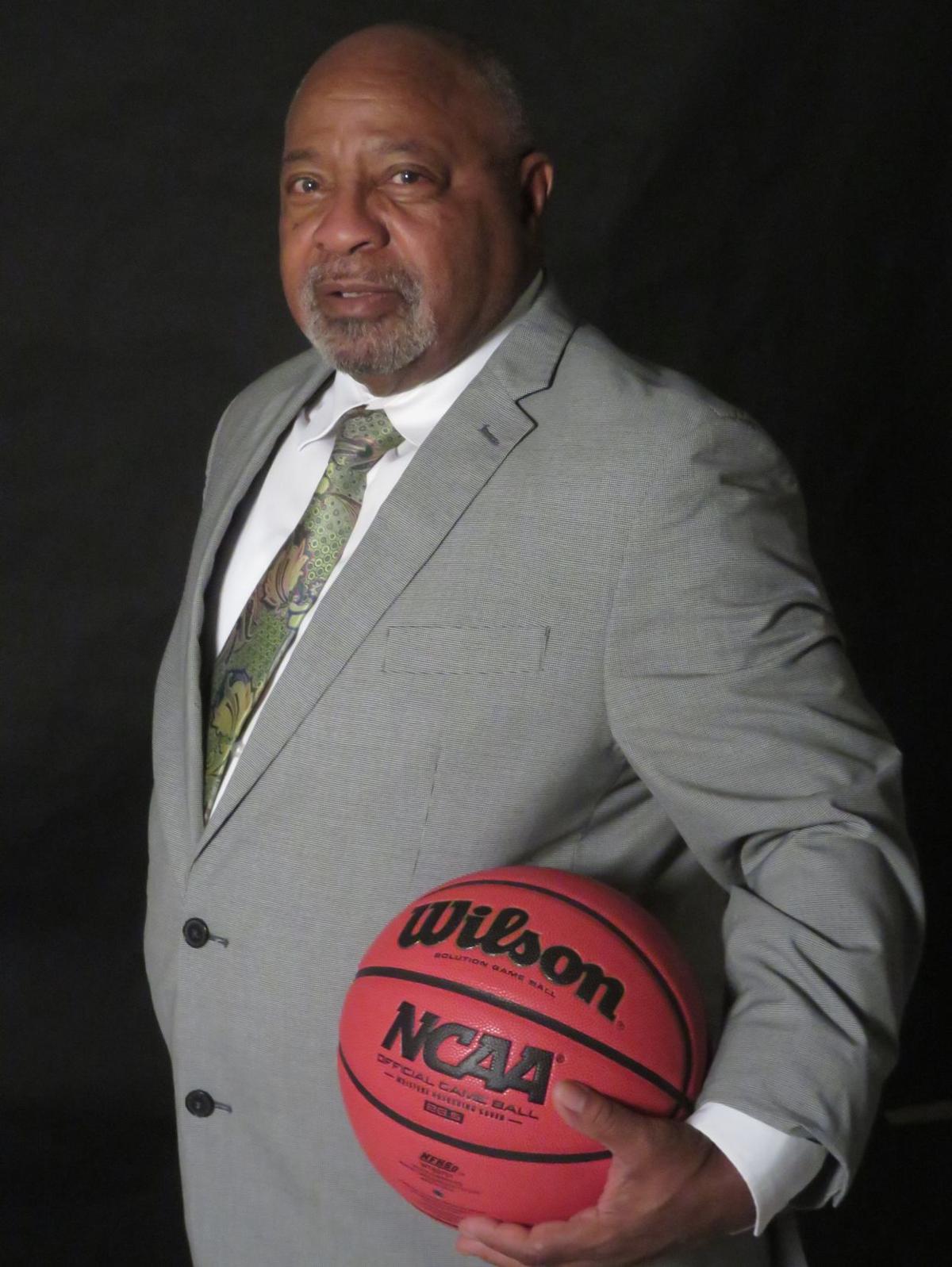 Lanett boys basketball coach Richard Carter led the Panthers back to the state championship game in 2020 and ended his storied coaching career with a 21-win season. 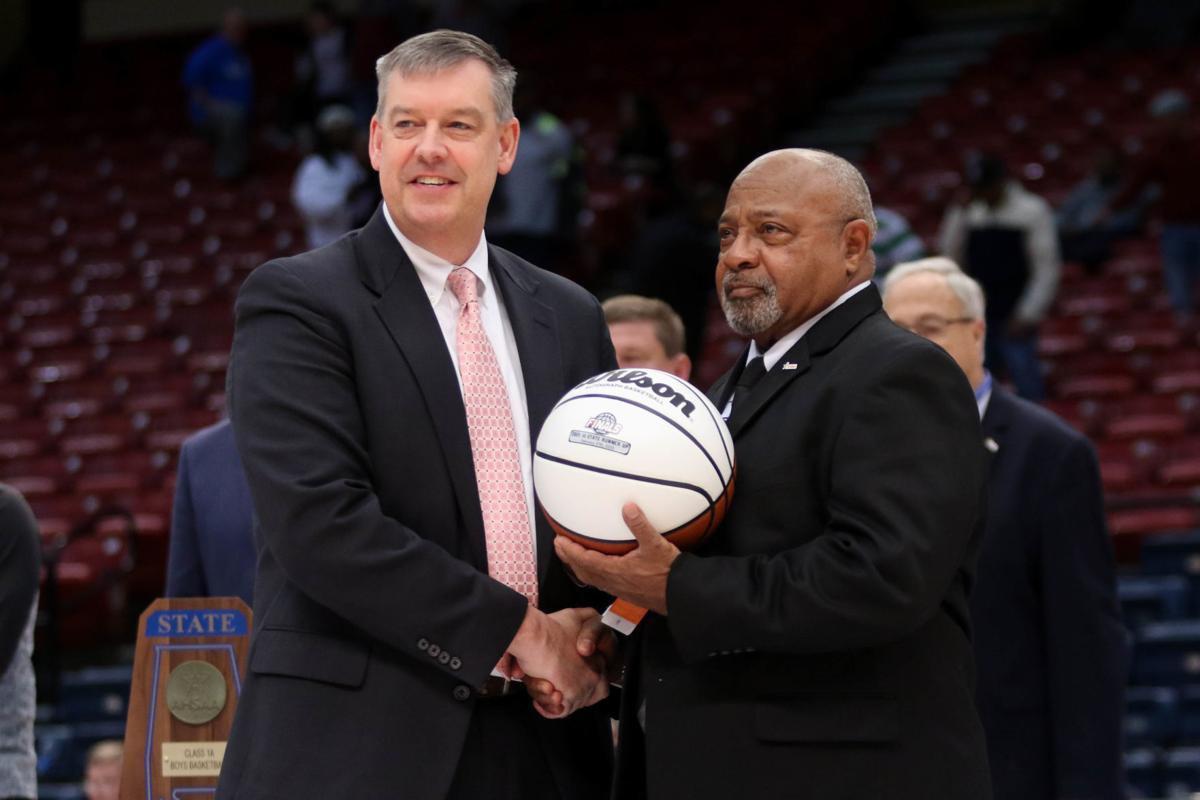 Lanett coach Richard Carter is presented with a participation ball after the Lanett vs Pickens County AHSAA Class 1A boys state championship game at Legacy Arena in Birmingham on Feb. 27.

Lanett boys basketball coach Richard Carter led the Panthers back to the state championship game in 2020 and ended his storied coaching career with a 21-win season.

Lanett coach Richard Carter is presented with a participation ball after the Lanett vs Pickens County AHSAA Class 1A boys state championship game at Legacy Arena in Birmingham on Feb. 27.

Last spring, Lanett boys basketball coach Richard Carter put retirement on hold following a 2018-2019 season in which the Panthers were upset in the region semifinals With the end of his coaching career looming, Carter led Lanett through a wild season that ultimately ended in the state title game.

The 72-year-old Carter guided Lanett through a rough 2-6 start to the season before the squad got rolling and won 10 of its final 12 games before the state tournament. The Panthers put together their finest play at that point, scoring at least 82 points in its first three playoff matchups before beating Jacksonville Christian to punch their ticket to the Class 1A state title game.

Thanks to Lanett’s fourth trip to the state title game in five years, Carter has been selected as the Opelika-Auburn News’ Boys Basketball Coach of the Year.

“After missing out last year and not getting back to the Final Four — which we really expected to do — going back this year in my final year as the head men’s basketball coach at Lanett was the thrill of a lifetime. It allowed me to do something that I really, really enjoy doing,” Carter said. “I enjoyed this basketball team even though at the start of the season it was kind of rocky. I enjoyed them because they just kept the pedal to the metal. Hey, they kept learning, kept learning, kept learning and getting better.

The Panthers came back after that disappointing end to last year determined to make up for that unexpected loss. Even with that drive, the start of Carter’s last season wasn’t easy.

The majority of Lanett’s players immediately transitioned from playing on the championship-winning football team to the basketball squad in December, and it was evident through the early part of the season. While regularly playing schools at least two classifications above them, the Panthers struggled to keep up and saw losses pile up quickly.

The problem was made worse with the brief departure of guard Kristian Story, who missed several games due to the Alabama-Mississippi All-Star football game.

Carter had already been through just about everything in his 50 years of coaching, so there was little sense of panic from the veteran coach. He knew the talent this year’s roster had, and while the Panthers’ record early wasn’t pretty, he felt the tough competition would benefit them in the long run.

“That was the key to it. If we were playing in the SEC or the ACC or one of those leagues where your record really made a big difference, we would probably try and soften our schedule — if anybody would play us,” Carter said. “Having to play the kind of schedule we did, it toughened us up. It prepared us. We played against every kind of style you wanted to play against with people smaller than we were, with people as big as we are.

“It helped us in every way mentally and physically to get us to where we were at the end of this year’s season.”

Carter said the turning point of the season came on Jan. 18. The night before, the Panthers were blown out at home against LaFayette in a 96-74 loss that left their record at 7-8 on the season. Despite the tough loss to their biggest rivals, the Panthers shook it off and promptly thumped Class 7A’s Central-Phenix City on the road 75-56.

At that point, Lanett was ready to get rolling.

With Kintavious Dozier making countless plays at point guard, Zameron and Cameron Boozer dominating down low and the “Bandit” reserve group providing valuable minutes for the team, the Panthers put together a tremendous stretch of play. Outside of losses to Class 4A’s Handley and Georgia’s Harris County, the Panthers took care of business to end the regular season.

That top-tier play continued come the area tournament. Lanett beat Wadley by 50 then topped Notasulga by 39 to move on to the regional semifinals.

“It was just an exciting time because I knew we were on a run then,” Carter said. “(Notasulga coach Clifton Knight) said to us at the end of the area championship game, ‘Coach, that’s why y’all are the champs. Y’all know how to turn it on and when to turn it on.’”

The Panthers kept the winning streak alive into their must-win games, as they beat Westminster, Florala, Cornerstone and Jacksonville Christian to return to the state title game. Lanett faced off with Pickens County in a back-and-forth game, and despite leading by eight with 5:25 left in the game the Panthers fell 57-55.

The loss offered a bittersweet ending for Carter, but it didn’t make him regret coming back. The return to the championship game still offered a sweet final chapter in Carter’s coaching career and was a fitting close to his nine-year run at Lanett.

“When I left Greenville, Georgia, I thought it was all over. Then I get this phone call from (Lanett athletic director Clifford) Story, who invited me to come and sit down and talk with him about (the job) to give me the chance to do it,” Carter said. “I’m glad they gave me that chance. I’m just so elated that I can walk away, go home and say, ‘We did it. We won three state championships and finished second for another one.’

“Hey, all of that means a lot to me, and I’m just thankful.”

Lanett has yet to name Carter’s replacement, but he said he hopes to meet with that person once it becomes official. Carter said his main advice to the next Panthers coach is to work hard and to focus on playing great defense, as that is the key to being a championship contender.

Carter had the Panthers on the brink of another state title but saw those hopes ultimately not come to pass. Although he won’t be standing courtside anymore, he believes Lanett still has what it takes to chase championships.