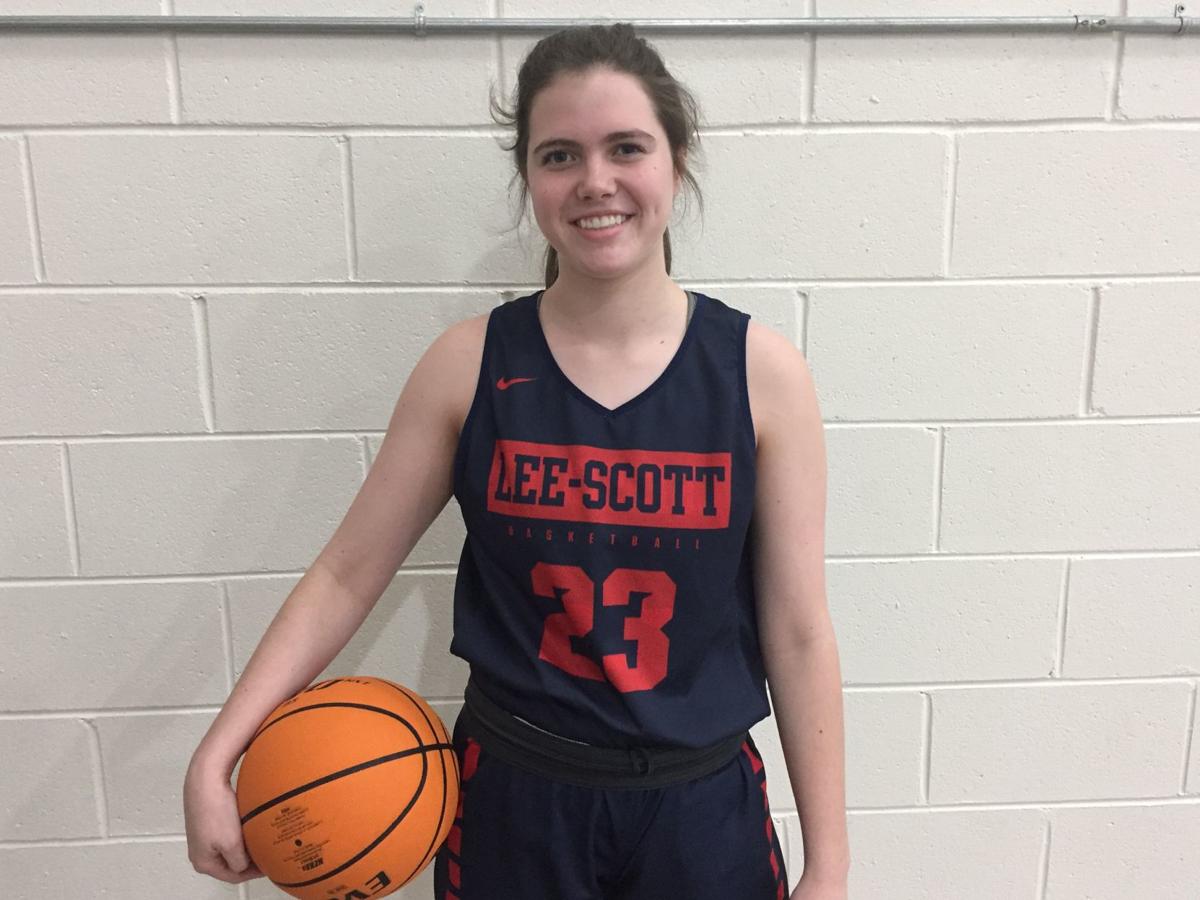 Lee-Scott Academy sophomore Chloe Johnson has excelled in his first season with the Lady Warriors after transferring from Tuscaloosa Academy. 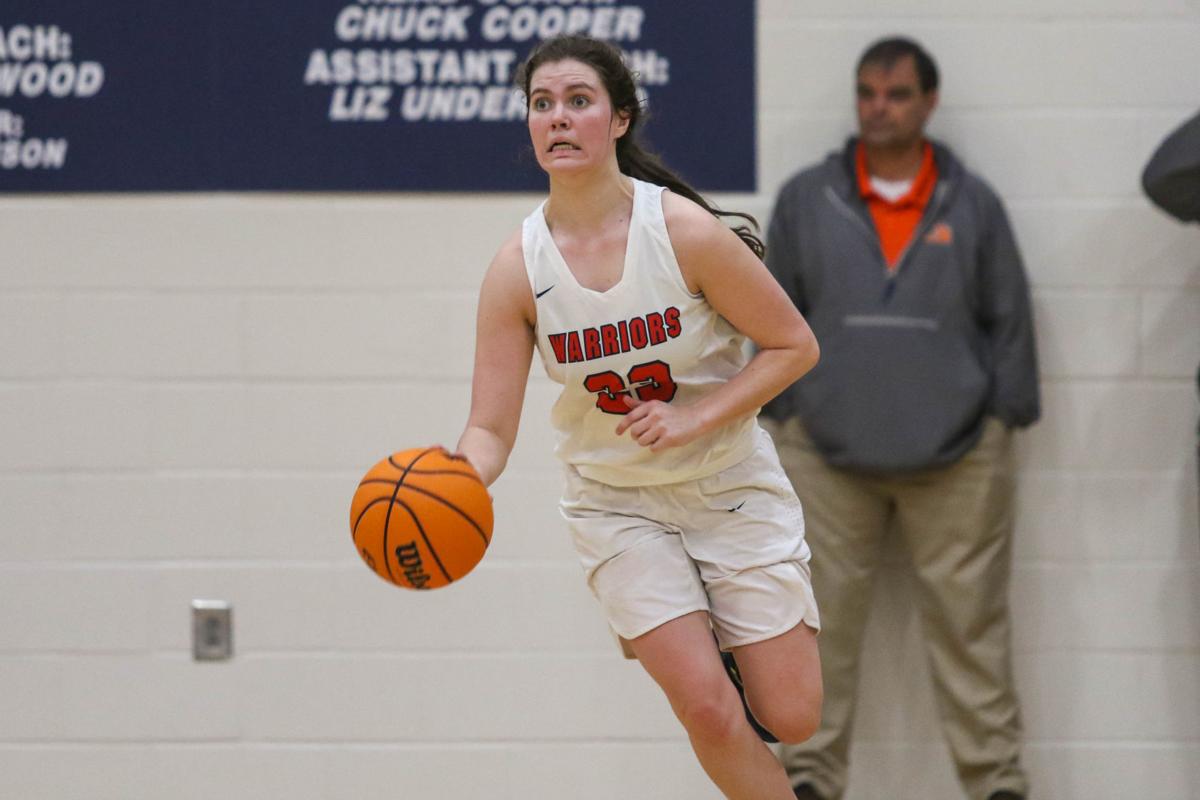 Lee-Scott Academy sophomore Chloe Johnson has excelled in his first season with the Lady Warriors after transferring from Tuscaloosa Academy.

When Lee-Scott sophomore Chloe Johnson is running the point for the Lady Warriors, one aspect of her game stands out among the rest: her no-look passing.

Chloe doesn’t hesitate to try the risky maneuver again and again, and her diligence and understanding of her Lee-Scott teammates has led to some big moments and countless highlight reel-worthy plays.

“I really have to trust the people that I'm playing with, first off,” Chloe said. “When I no-look, it just happens. I'm just very thankful to have the ability to do that and for (my teammates) to be there for me.”

The successful no-look passes are an impressive tactic for any player on the court — it’s even more so knowing Chloe wasn’t part of the Lee-Scott program this time last year.

Chloe transferred from Tuscaloosa Academy to Lee-Scott this summer when her father, Robert Johnson, replaced Robert Maddox as Lee-Scott’s head football coach. What followed for Chloe was a transition that was difficult early on but has since set her and her new team up well in chasing a state championship.

“Coming from TA and winning a state championship, I thought it was going to be rocky coming over here. It's really been so great. They've just accepted me, and it's been awesome,” Chloe said. “It's awesome to think that I can be on another team that's able to compete in that type of circumstance again. Honestly, I'm just thrilled to be successful again and to try and go compete for another state title.”

Chloe may only be a sophomore, but she doesn’t lack for varsity experience. That goes back — as crazy as it sounds — to her fifth-grade year.

In December 2014, the Tuscaloosa Academy girls basketball team got hit hard by the flu, leaving head coach William Johnson scrambling for players to fill his varsity roster. He decided to pull Chloe up from the JV team for a Christmas tournament, and during one of the games the girl starting in front of her got into foul trouble.

Without many options, coach Johnson told Chloe not to worry about the score and to just play the next play. As daunting as the task was, Chloe followed her coach’s advice and held her own against girls several years older than her.

“When a fifth grader is able to do that and just go play — and the moment was never really too big for her. Athletically, there was a difference. I think the girl who was in front of her for the other team wound up going to play college basketball,” William Johnson said. “She has a leadership quality that is hard to match. On a basketball team with seniors on it — there's a seven-year difference between her and our seniors — and she was able to make them better and affect the game as a fifth grader.

Coach Johnson didn’t forget how Chloe showed poise during that tournament, and the following summer he brought her to camp with the varsity team. Not only did Chloe make the varsity roster, but her play during the preseason earned her the starting point guard position.

Chloe proved herself right away to her head coach when the team opened the summer against Huffman and she held her own against a 6-foot-1 opponent. The season that followed proved to be a special one for the young point guard, as she got into a groove and the Lady Knights just kept winning.

Tuscaloosa Academy topped Lee-Scott in the AISA Class AAA state semifinals before beating Glenwood for the title. Chloe was named the state tournament MVP for her efforts.

The 2015-2016 title was just the beginning for Chloe and the Lady Knights. The team pulled off the feat again in her eighth-grade year and once more last season, even after Chloe already knew she would soon be on the move.

Winning with the Lady Warriors

Lee-Scott hired Chloe’s father prior to the state tournament, which left Chloe hoping she would not have to play her soon-to-be Lee-Scott teammates for the title. She faced off with Fort Dale Academy instead, and the 23-point victory allowed her to leave Tuscaloosa on a happy note.

Chloe admitted she was nervous about how settling in at Lee-Scott would be, but past experiences with new teammates Mary Mykal Prewett, Haley Harper and Sterling Tucker eased the transition. Chloe played with her new team throughout the summer and used that time to learn everyone’s tendencies and settle in as the Lady Warriors’ new point guard.

Lee-Scott head coach Corye Ivatt knew about Chloe from watching and scouting her during Chloe’s time at TA. Getting to see her every day, however, showed Ivatt just how remarkable a basketball player she really is.

“I think one of the best things that Chloe has brought to us is her competitive spirit and her competitive greatness. I always tell my kids we want to be competitively great, which is being your best when your best is needed. She's done that,” Ivatt said. “Her basketball IQ is really high, which is exciting and fun. She kind of will scan the floor before it happens. She can see more than one thing at one time, which is what you really like in a point guard.”

The Lady Warriors have been competitive over the past few years, but with Chloe on board the team has taken it to the next level. Lee-Scott sits at 20-2 on the season, which has put them in great position to start the state playoffs in two weeks.

Chloe has stood out more nights than not, and per Ivatt she’s had two triple-doubles and at least six double-doubles. In the team’s first meeting against rival Glenwood on Jan. 23, she put up 10 points, five rebounds and five assists in the Lady Warriors’ 45-28 victory.

Putting the stats aside, Chloe’s drive might be the most important thing she’s brought to Lee-Scott. Mary Baxley Smith, who didn’t really know Chloe until she transferred in, credited her with making the entire team more poised out on the floor.

“She's just helped us with everything we've done. She's definitely made us more confident and made us be there for each other and closer as a team,” Smith said. “She's everything to our team.”

Smith laughed when asked about Johnson’s no-look passes, explaining that it took some getting used to and that you always have to be alert because the ball might be coming your way. William Johnson, now Lee-Scott’s boys basketball coach, said he saw glimpses of those passes way back when Chloe was a middle schooler and that her unique ability made the Tuscaloosa Academy players around her better.

Chloe emphasized trust being key in her no-look passes, adding that those attempts have come a long, long way with the Lady Warriors since the summer. Her play as part of a stellar Lee-Scott team has everyone involved thinking about a state championship, and for Chloe, a fourth title would mean everything.

Chloe had accomplished a great deal before she came to Lee-Scott, but that hasn’t stopped her from working tirelessly with her new team. It’s no surprise to those who know her because just like when she has the ball at the top of the court, there is no looking back.