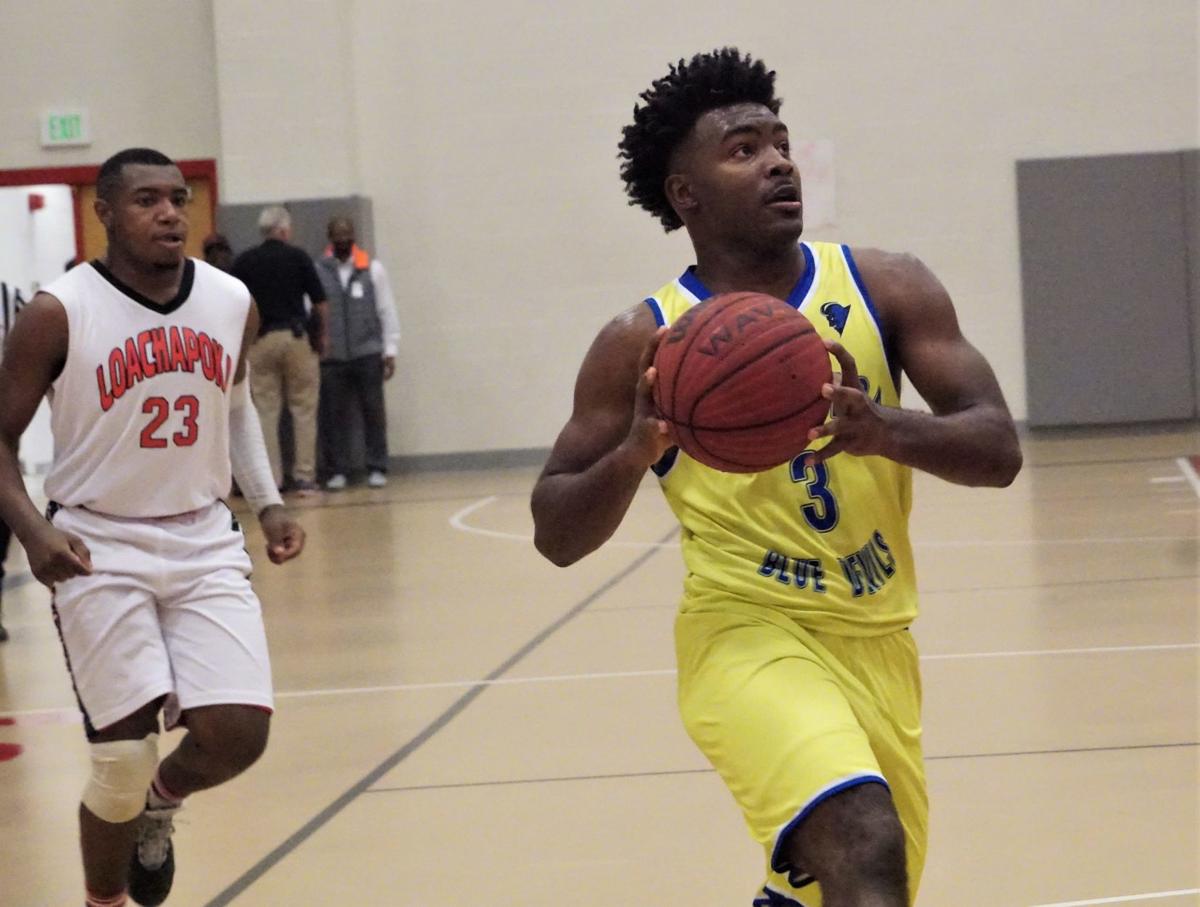 Notasulga's Tyquan Daniel (3) prepares to go up for a layup while Loachapoka's Jordan Holley tries to catch up during an area game at Loachapoka on Friday. 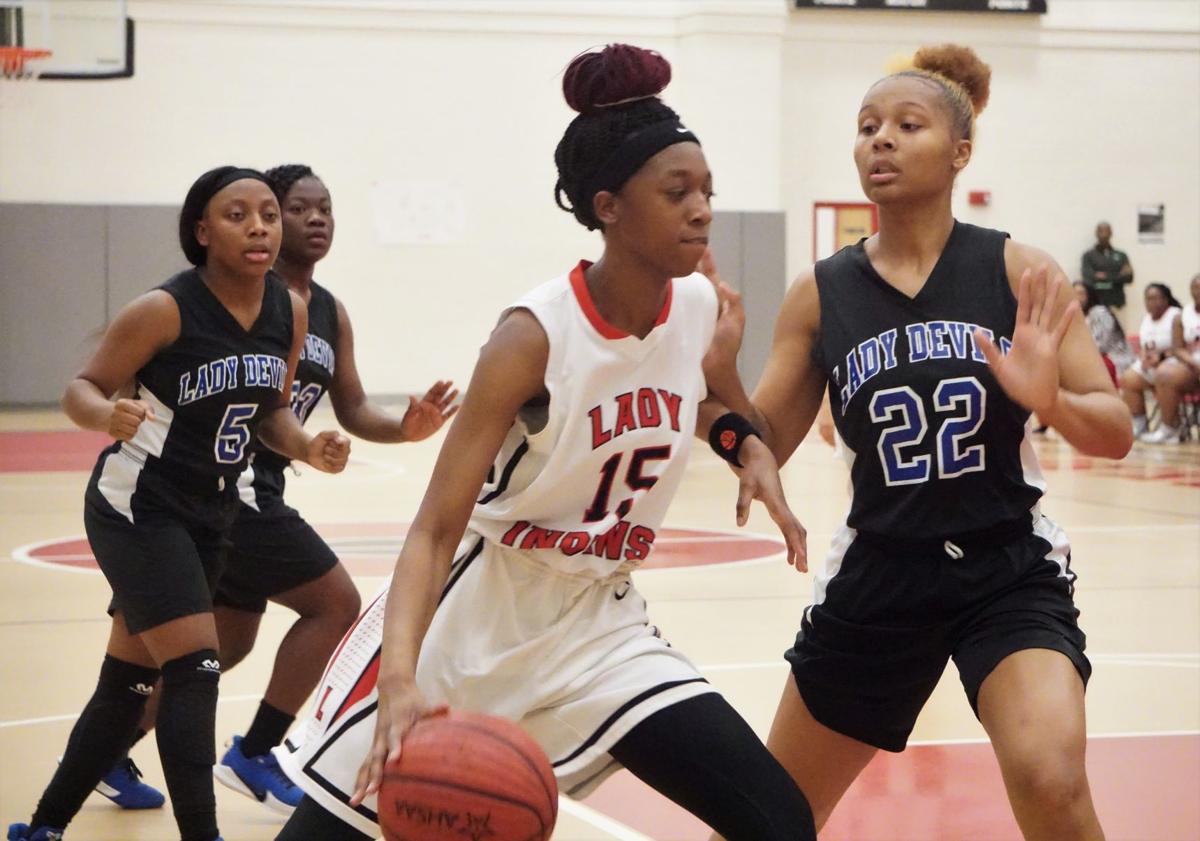 Loachapoka's Trinity Pulliam (15) drives toward the basket while Notasulga's Destiny Brown (22) and Jakylene Johnson (5) try to slow her down during an area game at Loachapoka on Friday.

Notasulga's Tyquan Daniel (3) prepares to go up for a layup while Loachapoka's Jordan Holley tries to catch up during an area game at Loachapoka on Friday.

Loachapoka's Trinity Pulliam (15) drives toward the basket while Notasulga's Destiny Brown (22) and Jakylene Johnson (5) try to slow her down during an area game at Loachapoka on Friday.

LOACHAPOKA — Loachapoka and Notasulga’s basketball teams met Friday night for another edition of the Battle of Highway 14. At the end of the night, both sides had something to smile about.

Loachapoka and Notasulga split its varsity games, as the Loachapoka girls grinded out a 69-48 victory and the Notasulga boys answered by holding off Loachapoka for a dramatic 52-50 win. The games not only represented bragging rights for the winning teams, but they will likely prove important when the area tournament begins in early February.

The Notasulga boys had led by double digits for the majority of their game, but a late offensive surge by Loachapoka put the burden on the Blue Devils’ shoulders. Fortunately for Notasulga, it had Jayquan Lindsay on its side.

Lindsay drilled two free throws with four seconds to go to quell a mad dash back into contention for the Indians and sealed the victory for the road squad. Lindsay — who ended the game with 20 points — capped off a game the Blue Devils seemed to have in hand several times only to watch the Indians battle back.

“Our point guard (Lindsay) made some tough plays at the end to put us over the top and give us a cushion because they did make a good run toward the end. Those plays we made early in the fourth quarter allowed us to have a cushion to where we could withstand their run,” Notasulga boys coach Clifton Knight said. “I just think Loachapoka’s guys fought well. We didn’t execute the way we needed to. You’ve got to be able to run sets when you need to.”

After fending off Notasulga (7-5, 2-0) for the better part of an intense fourth quarter, Loachapoka (5-13, 0-2) cut the Blue Devils’ eight-point lead down to four within 15 seconds thanks to Aaron Frazier’s free throws and a basket from Courtney Dowdell. After a Notasulga turnover out of bounds, Frazier came through again with another bucket, leaving the score 50-48 in Notasulga’s favor with only six seconds showing on the clock.

Lindsay had been the Blue Devils’ primary point scorer on this night, and the team was determined to live or die with him at the line. Lindsay stepped to the line for the umpteenth time with four seconds to go and calmly drilled both shots to effectively end Loachapoka’s hopes.

Dowdell put in a buzzer-beating shot from inside the paint, but all it did was cut the difference down to two points.

“It just shows his confidence level,” Knight said of Lindsay’s late free throws. “He was a little shaky at the beginning of the season when he didn’t really know his role. I think he’s starting to understand he’s a coach and a general on the floor. He really showed it tonight.”

Notasulga took advantage of Loachapoka’s struggles shooting from behind the arc to open the game, and as the Indians tried repeatedly in vain to hit a deep shot the Blue Devils built a lead. Notasulga started the game with a 14-2 run in large part to guard Jayquan Lindsay, who had eight of the team’s first 14 points.

Notasulga struggled to hit any shots in the second quarter, but its play on defense prevented Loachapoka from taking advantage.

Loachapoka again tried to connect from 3-point range to no avail for most of the second, and the Indians didn’t score a single basket until Courtney Dowdell’s shot dropped with 12 seconds left in the first half.

Notasulga had a chance to put the game away in the third quarter, but Loachapoka instead showed signs of life it lacked before. The Indians put together a 20-point third quarter highlighted by Jordan Holley, who hit a 3-pointer with 35 seconds left to cut what was once a comfortable Notasulga lead down to three points.

Holley’s shot set up a wild scramble of a final eight minutes that saw the Blue Devils somehow hold on for a win.

Lindsay led Notasulga in scoring and was followed by Tyquan Daniel, who had 13 points along with four rebounds. For Loachapoka, Frazier led the way with 12 points and 11 rebounds, with many of those buckets coming in the crucial final minutes.

The thrilling boys game followed a girls game that was in doubt for a much shorter period of time.

The Loachapoka and Notasulga girls were neck and neck early, but a dominant end of the first quarter set the Lady Indians up for a successful night.

After Notasulga built a 5-4 advantage through the game’s first four minutes, Loachapoka came right back with an 11-0 scoring streak from which the Lady Blue Devils never recovered.

Loachapoka (15-7, 2-0) got several players involved to take the lead. Shawndria Calloway hit a 3-pointer, Taylah Murph-Dowdell earned three points the old-fashioned way before hitting a 3 of her own, and Ty’Tiana Clemons came through with a bucket of her own.

Suddenly, the Lady Indians went from down one point to leading 15-5 once the first quarter came to a close.

“We applied a little pressure, and the girls were playing such good defense without fouling,” Loachapoka girls coach Anthony Edwards said. “It was a great win for us. That makes us 2-0 in the area. We really want to host the tournament — that’s one of our goals. It was a great win.”

Notasulga (7-6, 1-1) kept fighting thanks in large part to timely rebounds, but Loachapoka refused to slow down. The Lady Indians kept the pressure on the Lady Blue Devils and maintained their pace in order to get the last laugh.

The Lady Indians’ 19-4 run through most of the third quarter only extended their lead in what was already an assured area victory. The quarter featured some big baskets courtesy Trinity Pulliam, who ended the night with six points.

Calloway led the team with 13 points. Murph-Dowdell contributed 12 points in the victory.

For Notasulga, Andrea Avery did her part with a game-high 14 points.