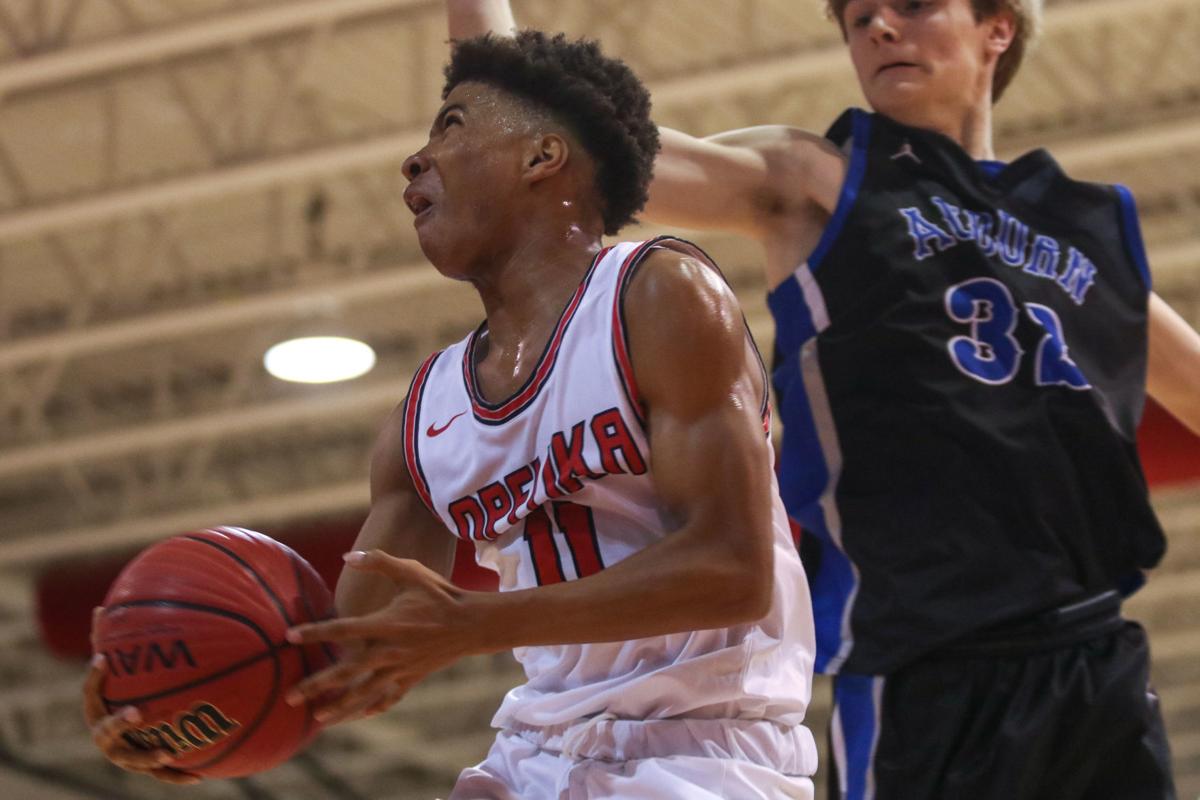 Opelika's Ja’Keith Carr (11) looks to lay the ball up while Auburn's Caden Brown (32) defends on Friday at Opelika High School. 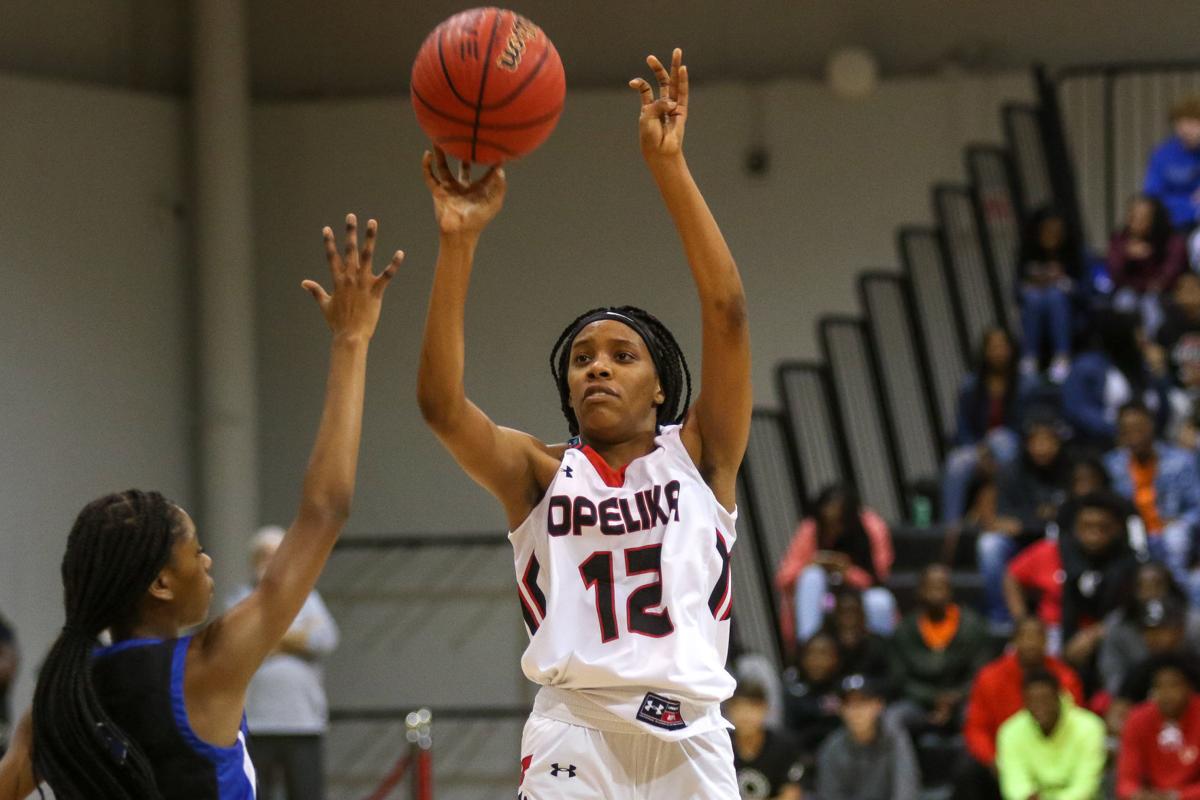 Opelika's Ja’Keith Carr (11) looks to lay the ball up while Auburn's Caden Brown (32) defends on Friday at Opelika High School.

The Opelika girls and boys basketball teams knew they were in for a four-quarter battle when Auburn High showed up for a rivalry showdown on Friday. Although, at times, the outcome of both games was up for grabs, Opelika managed to send the Tigers and Lady Tigers home hurting.

Opelika’s varsity basketball teams successfully defended their home court Friday, as the Lady Bulldogs beat the Lady Tigers 61-53 and the Bulldogs topped the Tigers 64-60. Both games featured 32-minute thrillers in which Opelika ultimately got the upper hand late.

The Lady Bulldogs and Lady Tigers found themselves tied 44-44 with seven minutes left in the fourth quarter. Shortly thereafter, Opelika took over.

The Lady Bulldogs (15-5) put the game away over the next four minutes, as the home squad pulled off an 11-2 run that left Auburn (13-6) with too much ground to make up in too few minutes. The scoring stretch was fueled primarily by Claire Worth, who tied the game at 44-44 with a 3-pointer than reeled off seven more points during the run of Lady Bulldog domination.

“I thought we just stepped up. We hit some shots and we got to the free-throw line, and I think that was big. We made some free throws. I thought our defensive stepped it up a little bit. We got a couple steals that kind of relaxed us a little bit,” Opelika girls coach Devin Booth said. “(Claire) was huge. She’s tough. She does a lot of little things that sometimes go unnoticed. She’s on the boards. She took care of the ball when we needed her to. I can’t say enough about her.”

After Worth’s shot from long range tied the game, Haley Sanders broke the tie with a put-back shot to make the game 46-44 with 5:58 on the clock.

Nearly one minute later, La’Dajah Huguley fired down the court to Worth, who carefully fired up a layup that dropped to stretch the lead to four.

Auburn desperately needed an answer, but instead all the Lady Tigers could do was watch Opelika put up more points.

Huguley hit one free throw with 4:37 left in the game to create a 49-44 score, and then she stretched it to 51-44 when Worth fired a picture-perfect pass through the defense and set Huguley up for the score. Auburn managed one basket after Huguley’s shot, but Worth erased the damage by hitting one shot under the basket then adding two more free throws with 3:01 to go.

After an Auburn turnover on its side of the court, Worth fired the ball down the court with the hopes of Ananda Hughley recovering it in time to put the ball in the basket. Hughley was the team’s leading scorer all night, and she added two more by somehow retrieving the ball and firing it up to leave the Lady Tigers in a 55-46 hole with only minutes to go.

Hughley led all scorers with 20 points along with eight rebounds. Huguley came through with big shots as well and ended up with 15 points, four rebounds and four steals.

Worth, meanwhile, ended up with 11 points, four rebounds and four assists.

The Opelika Bulldogs started their contest with Auburn on a hot streak before the Tigers roared back to make things interesting. Ultimately, an impressive third quarter from the Bulldogs set the stage for another Opelika victory.

After watching a comfortable first-half lead evaporate, the Bulldogs (4-10) shot the lights out in the third quarter to the tune of 25 points to build a lead Auburn simply couldn’t whittle down in time.

The third-quarter outburst was due in large part to the 3-point shooting of Grady Bynum and Ja’Keith Carr, whose accuracy behind the arc left the Tigers trying to play catch-up with time working against them.

“I felt like we finally finished one. We’ve been in a bunch of games against some good teams. Chris (Brandt) has got them playing very well. It was a good ballgame. Our kids just found a way to win down the stretch,” Opelika boys coach John Wadsworth said. “Grady and Ja’Keith hit big ones in the third, and then Tay Hardnett did in the fourth. That’s one ninth grader and two 10th graders that did all that.

“I’m just happy for the kids. They hung it all out there tonight.”

Opelika led by double-digits early in the contest, but the Bulldogs overcame Auburn’s hot second quarter by hitting big shot after big shot in the final minutes of the third.

With the game tied 37-37 with 3:15 left before the fourth, Carr came through on his second consecutive 3-pointer to put the Bulldogs ahead 40-37. Bynum joined in on the long-range shooting on Opelika’s next possession to make it a six-point contest, and 40 seconds later he did it again with a 3-pointer that put Auburn in a 46-37 hole with 21 seconds before the quarter ended.

Hardnett tacked on a hard-fought layup before the final buzzer sounded to leave the score 48-37 entering the final quarter.

Auburn got within four points with 23 seconds remaining, but Carr hit two free throws to effectively end the night. The Tigers put up a meaningless layup before the buzzer sounded, which had to serve as the squad’s consolation prize.

Carr led all scorers with 20 points in the victory. Brandon Howard was second on the team in scoring with 13 points.

For Auburn, Noah Warren was the go-to scorer with 11 points. Jayden Buckley followed with 10.

Wadsworth found himself still wiping sweat from his brow minutes after the game, which featured a packed Opelika gym and a raucous Bulldogs’ student section. Wadsworth has coached against the Tigers countless times in his tenure at Opelika, and he knows a thing or two about what it takes to get the upper hand.

“It’s just a neat rivalry. The kids, they all know each other. They play travel ball together. There’s a little chirping on the floor, and we got caught up in it and got some techs. It’s just a lot of fun,” Wadsworth said. “I’ve learned in 15 years being here at Opelika that the team that has the most fun and the team that out-rebounds the other one usually wins.”