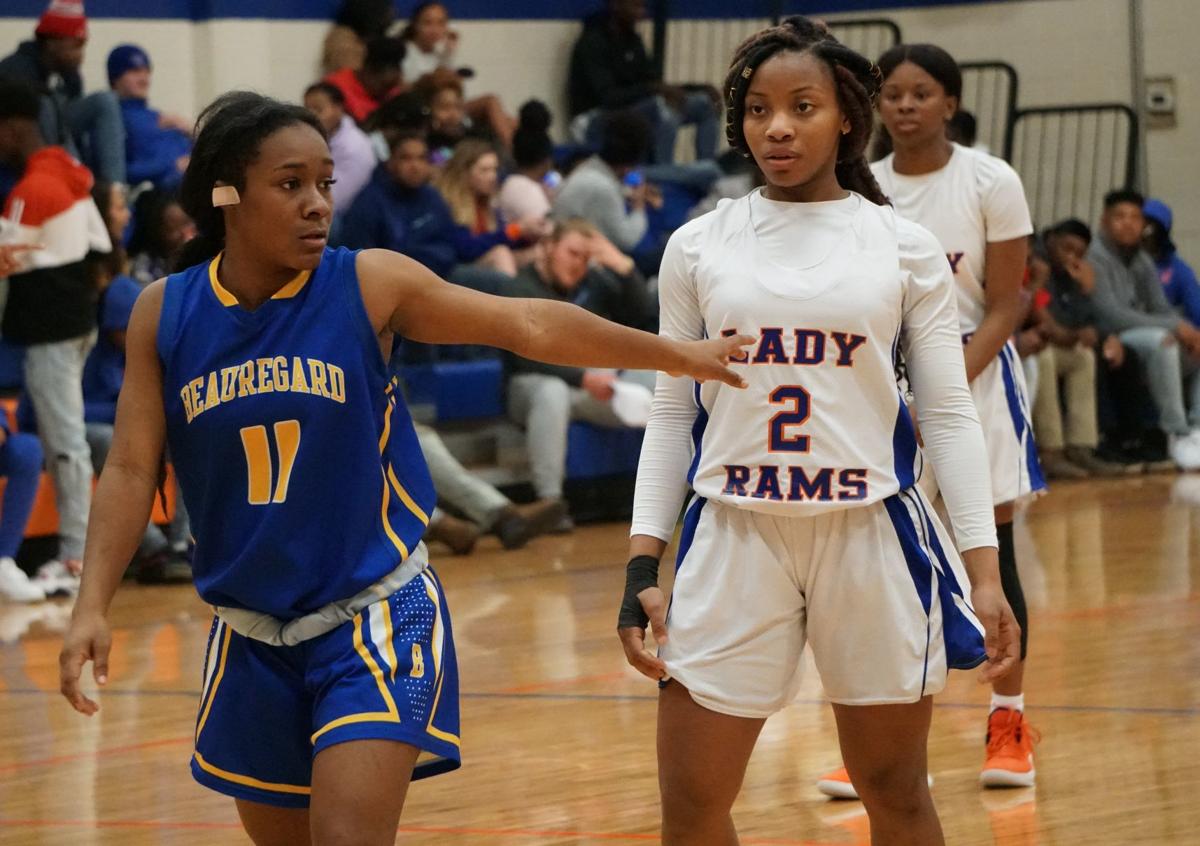 Valley's Jayla Lancaster (2) awaits an in-bound play while Beauregard's Mikayla Williams guards her during an area game at Valley on Thursday. 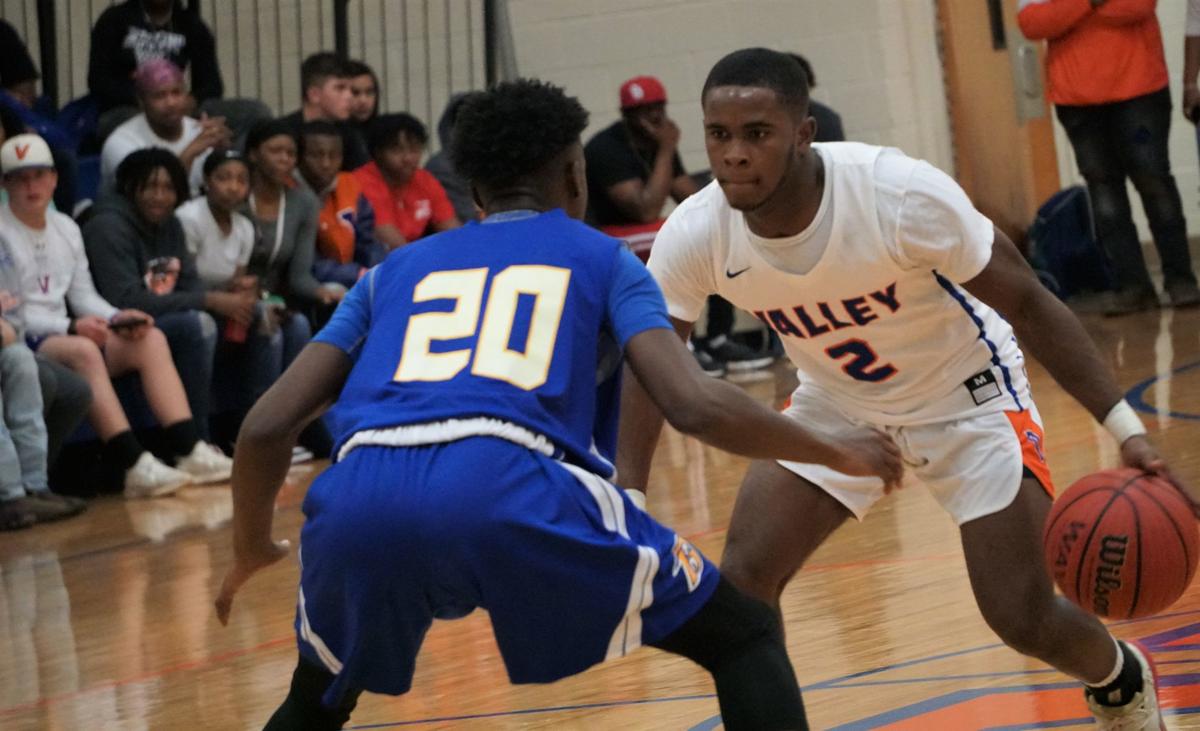 Valley's KD Hutchinson dribbles the ball down court while Beauregard's Riley Kirby plays tight defense during an area game at Valley on Thursday.

Valley's Jayla Lancaster (2) awaits an in-bound play while Beauregard's Mikayla Williams guards her during an area game at Valley on Thursday.

Valley's KD Hutchinson dribbles the ball down court while Beauregard's Riley Kirby plays tight defense during an area game at Valley on Thursday.

VALLEY — With area play now in effect, the Valley boys and girls basketball teams knew Thursday’s home games against Beauregard were crucial as the playoffs draw closer. Luckily for the Rams and their fans, both teams showed up determined to come out victorious.

The Lady Rams and Rams came out on the winning side against Beauregard, as the Valley girls snagged a 48-24 win and the Valley boys walked away winners courtesy a 69-48 score. The wins came in the second area game of the season for both Valley squads.

“I think our defensive pressure helped today. We had some guards to step up. Our guards really rebounded the ball well today,” Valley boys coach Marshon Harper said. “We handled the pressure. We didn’t turn it over as much. We didn’t shoot as well from the free-throw line as we want to, but the kids play hard. They play hard on defense.”

The Valley boys took the court after the Lady Rams’ blowout win eager to hand the Hornets a similar loss, but Beauregard didn’t make it easy early.

Both teams came out firing from 3-point range to open the boys game, but Valley (7-5, 1-1) took control in the waning minutes of the first quarter to put the pressure on Beauregard. Valley’s ability to outrebound Beauregard (7-8, 0-2) was pivotal in the opening eight minutes, as the Rams grabbed 14 boards and outscored the Hornets 18-9.

The Hornets hung with the Rams in a tight second and third quarter, but the home squad ultimately put the game on ice in the opening minutes of the mouth.

Beauregard had to find an answer quickly to cut into Valley’s multi-possession lead, but Demarice Farrow and his teammates made sure that wasn’t happening. Farrow continued to make just enough plays in the final quarter to keep Beauregard at bay, and in the final minutes he fired up back-to-back 3-pointers that led to an eruption from the Valley fans and disappointment from the Beauregard side of the gym.

Farrow ended the game with a game-high 24 points to go with eight rebounds, two assists and one steal.

“He’s a work-in-progress. He’s just a 10th grader. As game experience goes on, he’s going to get better,” Harper said. “I told him, ‘Hey, it’s not about how we start the race but how we finish.’ The guys are buying in. They’re playing hard, and I’m proud of them.”

For Beauregard, Jai Goodson and Zebediah Baird each had 12 points in the loss.

While the boys game was a high-scoring affair with offensive highlights from both sides, the girls game started off anything but that.

The Lady Rams and the Lady Hornets struggled to put up any points at all in the opening quarter, leaving Beauregard (2-7, 0-2) with a 5-1 lead entering the second due completely to free-throw shots.

Valley (9-2, 2-0) hit its first field-goal courtesy Arteria Florence with 6:10 left in the second, and the two sides battled back and forth before the half until Beauregard’s Ashanti Thomas hit a put-back buzzer beater to leave the score 16-13 in the Lady Hornets’ favor.

Once the third quarter began, Florence and the Lady Rams completely took over.

Valley got in a rhythm offensively and finally made Beauregard pay with its pressure defense, which led to a 12-0 scoring run that the Lady Hornets simply had no answer for. Florence played a crucial role in the run for the Lady Rams, and by the start of the fourth quarter she and her teammates had built a comfortable 36-20 lead.

“I just basically went in and told them at halftime that if we could find a way to score some and then get in our press everything would be alright,” Valley girls coach George Grimes said. “We came out that first four minutes and really put the ball in the basket, and it gave us a chance to set up our press several times in a row. That turned it around.”

From there, Valley was in cruise control. The Lady Rams put up 12 more points in the final eight minutes to finish off a 24-point home victory.

The win was a welcomed sight for Grimes and his players as they gear up to play Tuesday at Brewbaker Tech, which is also undefeated in area action.